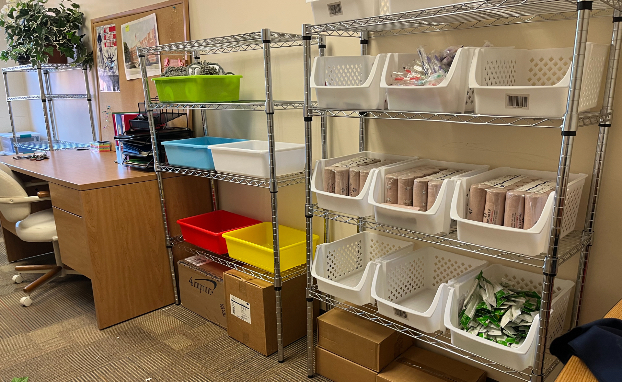 The K-12 Resource Room, which is still being stocked, should be operational before the upcoming school year. Photo courtesy of Melissa Smith.

Wanting to ensure students will always have ample access to items such as school supplies, the United Way of Stanly County has partnered with Stanly County Schools to create a K-12 Resource Room.

Through the space, at Albemarle Parks and Recreation’s office along East Main Street, teachers, guidance counselors and nonprofit after-school staff across the district will have access to free classroom supplies, including backpacks, pens and pencils, along with other essential needs such as toothbrushes, toothpaste and packs of detergent.

Nearly $20,000 worth of technology items, including earbuds and tablet chargers and charging power banks, were donated through a grant by the company 4-Imprint. 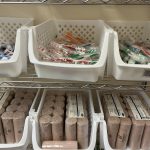 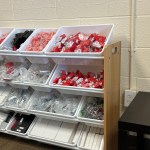 In addition to the physical supplies, the room will also have information available about nonprofit community resources for children that may need support services for their families.

The plan is to have a ribbon cutting at the end of the school year, United Way Executive Director Kelly Misiak said. The resource room should be operational before the start of the next school year.

Having been a long-standing goal between United Way and the school system, Misiak began having discussions about creating the space with Melissa Smith, former Central Elementary principal who is now the school system’s director of community engagement and dropout prevention.

“There is a need throughout the year that we want to make sure that there is a location where guidance counselors and teachers can say, ‘Okay, I want this kid to be successful and I want their family to be healthy and successful and here’s a whole room of resources where I can do my part,’ ” Misiak said.

Smith, who will be the point person for the school system, said she’s “totally excited” about having such a critical resource available for students, adding that “this is what she was called to do.”

Assuming the demand will be great enough, Smith thinks eventually the school system will likely outgrow the space, “but this is a starting point.”

“I only see this as a beginning to something bigger,” she continued. “So if this is successful — and I believe it will be because the needs are great — then we will adjust as we go.”

The resource room will continually be replenished throughout the school year to make sure supplies are always available to those who need them.

United Way also helps organize a supply drive for the school system each August. It will start early this year to meet the need in the community. The organization is seeking businesses, churches and other organizations to host school supply donation bins beginning in early June. Misiak encourages people to donate all kinds of items but especially those that often get overlooked, such as clean socks.