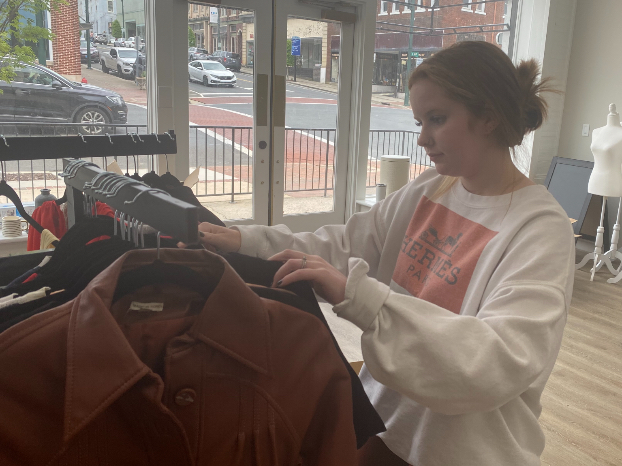 Kalyn Luther's new boutique is set to open in downtown Albemarle May 21.

Kalyn Luther has always had an interest in fashion. The Albemarle native, who recently graduated from Western Carolina University, spent the past few years selling secondhand clothes out of her home after purchasing them at thrift stores, consignment stores and yard sales.

Wanting to grow her business and accommodate many of her customers’ desires, including having dressing rooms and ample space to try on the clothing, Luther, 21, decided, after much prayer and planning to “take the jump” and open her own store.

After finding a 1,100-square-foot space on the first floor of Main Luxury Apartments, the new upscale apartment complex at 103 N. 1st St. in downtown Albemarle, she is getting ready to open Whiskey Eunoia. The store’s grand opening will be May 21. It will include a Chamber of Commerce ribbon-cutting, refreshments and prizes (anyone who makes a purchase can enter to win Apple AirPods and a $100 gift card).

As she gets ready to open, Luther is feeling a mix of emotions.

“I feel insane but blessed and very thankful to be where I am,” she said.

Luther is aiming to make her store — which will feature vintage clothing, shoes, purses, hats and other accessories from well-known brands such as Free People, Levi’s, Anthropologie, Lilli Pulitzer — a place where women, regardless of age or size, can find something that speaks to them.

“The main thing is making people feel confident in their bodies,” she said. “It’s a matter of making every woman feel like she is beautiful because she is.”

Whether someone is seeking a casual outfit to hang out with friends during a bachelorette weekend or something more professional for the workplace, Whiskey Eunoia offers a range of unique styles. 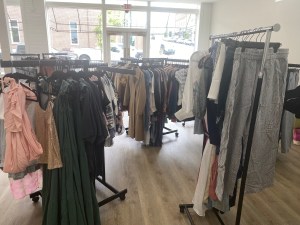 Whiskey Eunoia will feature all types of vintage clothing.

She has already purchased much of her inventory, which she said will be about 90 percent secondhand clothing and 10 percent new items.

Similar to the business model behind Plato’s Closet, anyone wanting to sell their gently used brand-name clothing and accessories can come to Whiskey Eunoia and Luther, who has set prices for each item, will pay them cash on the spot.

Thanks to a strong social media presence, where Luther regularly posts about new clothing items, Luther knows people are excited about the opening.

“My mom went into Harris Teeter recently and she had three people come up and talk to her about it,” she said.

For Luther, who lives in Stanfield with her husband Daniel and 8-month-old son, what she appreciates the most about fashion, and what she hopes to convey at her store, is that every person has their own style.

In coming up with a name for her business, she wanted to include whiskey because “it’s kind of rough around the edges, but then it’s smooth, and I feel like that describes me.” But she didn’t stop there: she also looked up words that sounded cool and also had interesting meanings. That’s when she discovered eunoia (pronounced “you-noi-ah”), a relatively unknown word that’s defined as a feeling of goodwill.

“All the good things in life is what eunoia is,” Luther said.

She likes it because it sticks in people’s minds when they see it, largely because so many don’t know how to pronounce it. She’s heard all kinds of attempts, including pneumonia, petunia and euphoria.

Luther hopes people wrestle with the oddness of how the word looks and sounds — that’s an intentional part of her marketing strategy.

Whiskey Eunoia will be open from 10 a.m. to 6 p.m. Tuesday through Saturday.