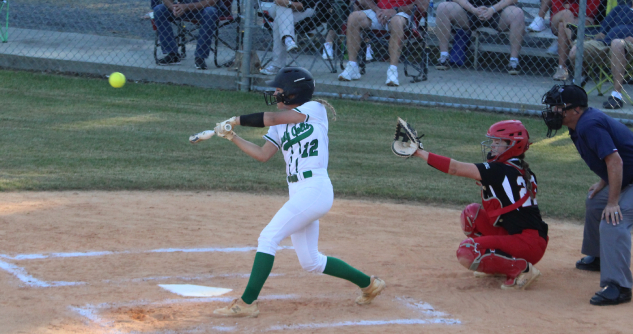 Kristen Smith leads off for West with a triple in Tuesday's 11-0 win over Morehead. (Photo by Charles Curcio/staff)

The West Stanly softball team honored its history Tuesday night before the Colts’ third-round playoff game versus the Morehead Panthers.

Before the game, members from West’s 1997 1A/2A state championship team were honored on the 25th anniversary of the school’s first state title.

The current Colts kept their season alive with an 11-0 five-inning win over the Morehead Panthers.

Lily Huneycutt threw a one-hitter for West (24-4), with no walks and eight strikeouts. She struck out five of the first six batters in the game.

The junior pitcher talked about bouncing back from the last game, where the Colts lost a six-run lead but rallied for a walk-off win.

“It definitely was a different approach,” Huneycutt said regarding the win. I had to pull something from inside of me to work our way up…(it was) definitely trust in myself and my mechanics that I’ve learned over the years.”

The West pitcher mentioned the seniors, including Ashlyn Hughes, saying she and the others have worked hard for them as well.

Kristen Smith, the Colts’ leadoff hitter, had a big night at the plate with two triples and three RBIs. Lilly Hartsell had three of West’s 11 hits and drove in a run, while Teagan Ritchie drove in three runs and added to her own school record for most home runs in a season.

West’s offense got things going early when Smith led off with a triple down the first-base line, scoring on a Teagan Ritchie RBI single.

“As I started, I needed to get a good hit. Everyone follows what we do, so we all stay up in the dugout. Having a good team behind me helps…(when) everybody is up and pushing me to do my best,” Smith said.

The Colts added three runs in the third inning when an error by the Panthers’ second baseman allowed two runs to school. An RBI groundout by Smith put West up, 4-0.

Smith drove in two more in the fourth with another triple, then Ritchie delivered a two-run home run to left field, her 18th of the season.

After a pitching change, West added three more runs and shut the Panthers out in the fifth inning for the win.

Head Coach Emily Smith said the Colts played with more confidence Tuesday, adding the team “learned from the last game and really pushed through and just made some good adjustments. We tell them to come out from pitch No. 1 and be ready to go. I feel like that’s what we did.”

West Stanly faces a familiar opponent Friday night in the fourth round of the state playoffs. Anson County (17-7), the No. 14 seed, took No. 6 Bandys into extra innings. The Bearcats scored two runs in the top of the 11th and held off a rally for a 5-4 win.

Anson stopped a 16-game win streak for West with a 5-4 win at The Corral in the Rocky River Conference Tournament championship game.

“There’s been a lot of doubt about this team,” Huneycutt said, “but we worked through the pressure and push through everything that has been said. This team has come a long way and we are proving ourselves.”

Regarding what Tuesday’s win says for West, Smith added the win “shows what we really can do. We have a lot of doubt after losing six seniors, but after coming back like this, I feel (others) will be like, ‘Yeah, they’re back.’”

Ritchie said West is scrappy, adding “we’re going to do whatever it takes to win ball games. We’re not going to let up…pedal to the metal.”