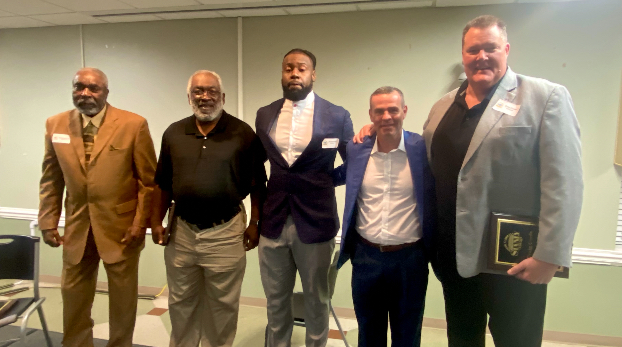 After two years playing high school basketball in Tennessee, Craig Cordes wanted a change of scenery following a dispiriting conversation he had with his coach about his future prospects.

He had his sights on Albemarle High School after his sister and brother-in-law made contact with the school’s legendary coach Dave Holcomb. Once he found out the team had recently made it to the state semifinals before losing to future NBA star Dominique Wilkins and Washington High School, he was sold.

So, leaving his friends and family behind, Cordes relocated to Albemarle to play for a coach he had never met. He took a gamble, but it paid off.

Cordes averaged 22 points and 13 rebounds per game his senior year, and was named South Piedmont Conference player of the year. He later became an NAIA All-American at Pfeiffer College, where he finished his career with almost 1,300 points.

“What a blessing it turned out to be,” said a tearful Cordes about his decision to move to Stanly County. 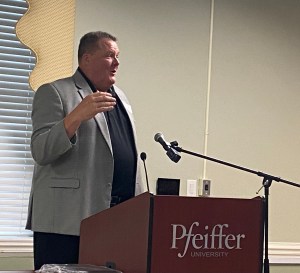 He was one of five athletes, along with Denico Autry, B.J. Hill, Brandon Beane and Charles Kirk Sr., inducted into the Stanly County Sports Hall of Fame Monday night as part of its 30th Class.

“It’s the biggest one I’ve ever been to,” Hall of Fame Committee Chairman Toby Thorpe said.

He noted that while each year typically features two inductees, this year was different since the three 2020 inductees, Beane, Kirk and Cordes, never had an in-person ceremony due to the COVID-19 pandemic.

Proceeds from the induction ceremony will help go to moving the Hall of Fame display from its current location inside the Stanly County Commons to the History Center, Thorpe said.

The keynote speaker was former ACC Commissioner John Swofford, who spoke during a lengthy question and answer session with Albemarle native Dean Jordan, who was inducted into the Hall of Fame in 2016, about a topics including his career as a young athletic director at UNC, his relationship with Dean Smith and the expansion of the ACC under his watch from nine to 15 teams.

But the main focus of the evening centered around the homecoming of some of Stanly’s most talented athletes.

Autry, who graduated from Albemarle High and Mississippi State University, is a defensive end for the Tennessee Titans, following successful stints with the Oakland Raiders and Indianapolis Colts. He had 1.5 sacks in the Titans’ 19-16 loss to the Cincinnati Bengals — and Hill — in the 2021 AFC Divisional Playoffs. Autry has recorded 233 tackles, 39.5 sacks and three forced fumbles during his eight year NFL career.

“I want to thank Stanly County for giving me this award,” Autry said. “This is nothing but the result of hard work and effort.” 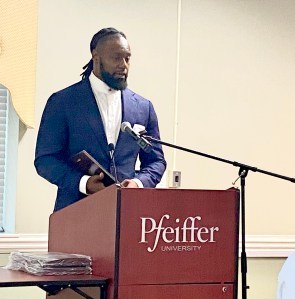 Beane, a former quarterback at South Stanly High School, was named general manager of the Buffalo Bills in 2017 after serving 19 years with the Carolina Panthers, including two seasons as the team’s assistant general manager.

Since taking over, Buffalo has made the playoffs four times, including the AFC Championship Game in 2020. Buffalo captured the franchise’s first division title since 1995. He was named by The Sporting News and the Professional Football Writers Association as the NFL Executive of the Year in 2020.

He thanked his family and several of his coaches, including former South Stanly football coach Charlie Phillips, whom he called “the most instrumental coach I had growing up.”

“I wouldn’t be here without all of my coaches,” Beane said. 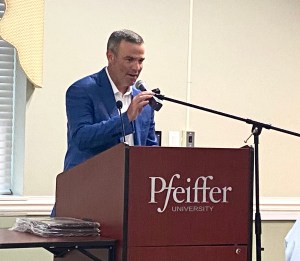 Former West Stanly and NC State graduate Hill is a defensive tackle for the Cincinnati Bengals, where he helped the team make its first Super Bowl since the 1988 season, a narrow loss in the final minutes to the Los Angeles Rams.

During the Bengals’ dramatic 27-24 overtime win against the Kansas City Chiefs in the AFC Championship Game, Hill made an acrobatic interception of quarterback Patrick Mahomes in the third quarter, which helped spur his team’s comeback from down double digits.

Hill could not make the ceremony, so his family accepted the honor on his behalf.

“It doesn’t matter where you’re from or what kind of winning or losing record you have as a kid or any championships you win, with hard work and dedication and keeping your head up and out of trouble and surrounding yourself with the right people, you can do anything you put your mind to,” his sister Nicole Gause said. 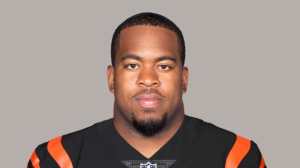 Kirk was born in Albemarle and graduated from Kingville High School, where he achieved athletic success in basketball, football and baseball. He went on to Livingstone College, where he was named EIAC Basketball Player of the Year in 1956-57 and was awarded the Sidney Green Memorial Award as the school’s most outstanding athlete. He also selected as a member of the “All European” football and basketball teams during his two-year stint with the U.S. Army stationed in Germany.

“I’ve never heard of it before and I don’t know how I got on that list, but whoever made that list, thank you very much,” Kirk said about receiving the honor. He added that whenever people do the right things for the right reasons, “you will always be successful.” 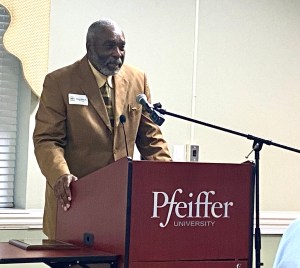 Charles Kirk, Sr. was a three-sport athlete while at Kingville High School.

In a short interview after the ceremony, several of the athletes mentioned how their success on the basketball courts and football fields across the county helped shape the people they’ve become.

And what about the young athletes across the county, working hard each day to try and become the next Craig Cordes or the next Denico Autry?

“You gotta stick with the big picture, put in the effort, stay with it and push forward to make your dreams come true,” Autry said.