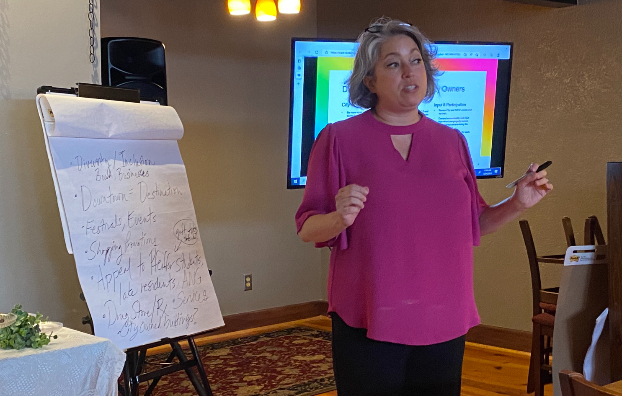 Appealing to more diverse business owners; relocating Food Truck Fridays from City Lake Park to downtown Albemarle; looking to bring in more convenience-based services, such as a pharmacy, for young professionals enrolled at Pfeiffer; promoting festivals and events to people residing in areas outside Stanly, including Concord and Charlotte.

These were just some of the ideas offered up by business owners and stakeholders during a public input session Tuesday morning at Tiffany’s at the Boardroom, one of the final components in a partnership between the City of Albemarle, ElectriCities and Downtown Strategies to help revitalize the downtown. A second session was to be held Tuesday night at Five Points Public House.

Downtown Strategies, a division of the Alabama-based marketing firm Retail Strategies, which began working with the city to improve the downtown last fall, is about to complete its comprehensive strategic master plan comprised around its five key pillars: design, walkability, policy, tourism and economic catalyst opportunities. The plan is expected to be presented to City Council for its approval next month.

“This needs to be your plan, this needs to have your input and I would just urge everybody to be part of this and be part of this moving forward,” Albemarle economic development director Keith Tunnell told the crowd. He added the only real “litmus test” when crafting the plan is this: Will it benefit the downtown property and business owners?

With Tunnell set to leave his position at the end of June, he offered several recommendations for how he thinks the city could improve its downtown: Create an annual signature festival that helps define what the downtown is about; expand the marketing and promotion of large-scale events such as the Winter Wine Festival to reach people across the greater Charlotte region; and create a women and minority business program to attract more diverse businesses to the area.

Albemarle Downtown Development Corporation Director Joy Almond mentioned a key hurdle when trying to recruit businesses is not necessarily a lack of interest, but rather a lack of building inventory that is move-in ready.

Former councilman Chris Bramlett offered recommendations to help appeal to a broader base of people. The downtown should lean into its proximity to Pfeiffer’s Center for Health Services — he repeatedly calls this the “Pfeiffer effect” — and think of itself more as an academic village.

“Having Pfeiffer here may be the best thing that’s happened to us since the railroads came in the 1890s,” Bramlett told the crowd. “There is no better place to live on earth than an academic community.”

While many Pfeiffer students enrolled in the university’s physician assistant and occupational therapy programs live outside the city, once more apartments become available, they will likely move into the area, providing a more consistent revenue stream for local businesses, he said.

With so many people living on or near major bodies of water across the county, Bramlett also suggested the downtown find ways to appeal to those types of affluent residents, who likely have more money to spend.

“We’ve never really been able to plug into that the way we should,” he said.

In order for the downtown to grow and be as successful as possible, it ultimately will take all the stakeholders — the business and property owners, the ADDC and the city — working together and trusting each other.

“I think you’ve got a gem here,” Tunnell said. “This place can be really, really special, more special than it is now.”