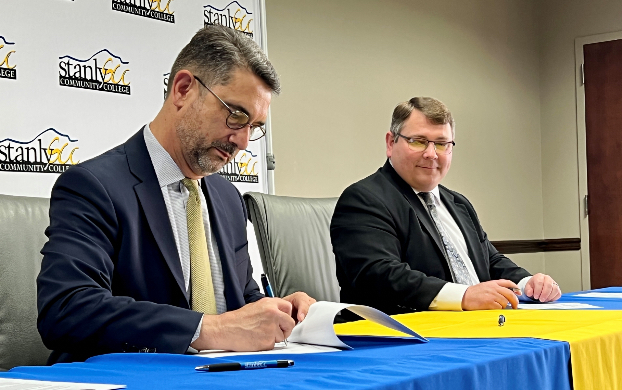 Stanly Community College President Dr. John Enamait has signed many articulation agreements with various universities during his tenure, which has allowed for an easier transition between the institutions, but the one he signed Tuesday morning with Wingate University President Dr. Rhett Brown was notably different.

That’s because the agreement allows SCC graduates with a two-year associate’s degree to earn a bachelor’s at Wingate for no more than $2,500 per year in tuition. So upon graduating from Wingate, a student likely would have only paid $5,000.

“There’s not really a better deal for folks in Stanly County,” Enamait said during the signing ceremony, noting the agreement takes effect immediately. “It’s really a significant opportunity for our students.”

SCC is the second community college Wingate has partnered with on this specific articulation agreement after South Piedmont Community College.

“This one is special because it really aligns so well with what is at the core of our strategic plan and our values and that is students and student success,” Enamait said.

Even students who received their two-year degree many years ago can still take advantage of the agreement, known as the Gateway Scholarship, as can high school students who have taken advantage of SCC’s Career and College Promise program.

“The college and our students and Stanly County will recognize the fruits of this signing for many years to come,” Enamait said. “Sometimes we don’t see the immediate results of our efforts, but this is an easy one to really understand the implication for our
students and for workforce development.”

Brown, a first-generation college student who started at a community college, said Wingate always strives to be a “laboratory of difference-making” across the region, and this new agreement will help strengthen the relationship between the university and Stanly County.

“When we care about our community and think about cradle-to-career and all of our educational needs, we know that collaboration is key,” Brown added. “We couldn’t be more pleased to work with Stanly and tackle issues together – whether cost, transfer-ability or time-to-degree.”

A bachelor’s degree in this country, regardless of specific major or school, will typically return more than $1 million of lifetime earnings over a high school diploma, Brown said, citing statistics from the Georgetown University Center for Education and the Workforce.

Roughly 66 percent of jobs across the state require a post-secondary degree or high-quality credential, according to the nonprofit myFutureNC, but only 49 percent of North Carolinians ages 25 to 44 have that level of education. In Stanly County, roughly as many people have less than a high school diploma (13 percent) as have a bachelor’s degree (13 percent).

“We already serve a significant number of students from across Rocky River and look forward to opening the door for
more of them to build on the success they’ve achieved at Stanly Community College,” Brown said. “Our state needs two million people with post-secondary degrees or certificates by 2030. We believe the Gateway Scholarship is part of the solution.”