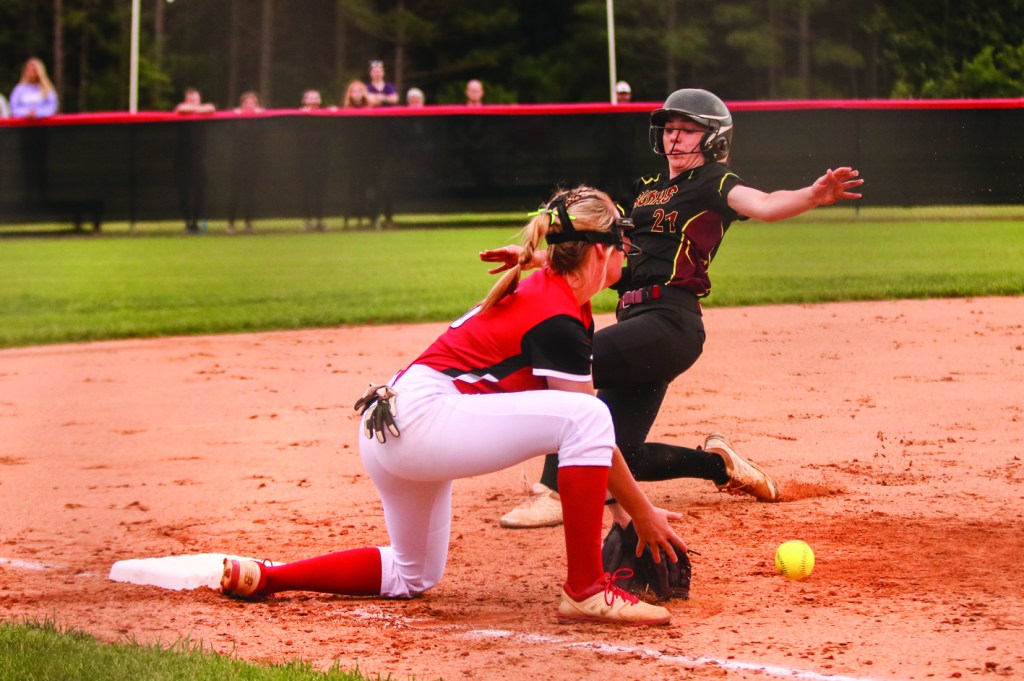 South's Cassidy Smith makes the out at third. (Photo by SHANNON BYRD)

Back in 2001, after his New York Jets team had squeezed out a 13-12 win over the Carolina Panthers despite his throwing three interceptions, quarterback Vinny Testeverde quipped, “Sometimes you have to win ugly.”

South Stanly’s top-seeded softballers can identify with Testaverde after topping visiting South Stokes 5-4 on Tuesday evening in spite of a four-error effort in the field.

Bulls pitcher Ali Glover worked through control issues early, but after giving up a two-run homer in the top of the fifth, retired nine of the next 10 batters in order. Meanwhile, her offensive teammates were able to scratch out two runs in the final three frames.

After two scoreless innings, South Stokes struck first in the top of the third as Rebecca Amos led off with a single, stole second and scampered to third when the throw trickled into center field.

Cindy Patterson followed with a sacrifice fly to put the Sauras up 1-0.

South Stokes proceeded to double the lead with a two-out rally in the fourth. Tatum Brim doubled down the left field line, after which Sauras pitcher Madison Wilson contributed to her own cause with a hit, sending Brim home.

The Bulls’ offense came to life in the lower half of the fourth.

Emma Campbell led off with a double, moved to third on a dribbler back to Wilson, then scored on Cassidy Smith’s grounder to second.

With two out and nobody on, Skylar Mauldin drew Wilson’s first walk of the night, scoring immediately thereafter when Mary-Ryan Hinson tripled. Hinson then tallied the go-ahead run on a base hit by Jacklyn Almond.

The Sauras jumped ahead in the fifth as leadoff batter Emily Mitchell drew a walk, and scored ahead of Riley Pinnix who launched a Glover fastball over the center field fence.

South Stanly knotted the game at 4-4 in the fifth when Alexis Harward singled, and moved to second on Campbell’s walk. Mattie Poulos followed with a hit which scored Harward. The Bulls managed to load the bases with two outs, but left them full as the inning ended on a popup.

Glover retired the Sauras in order in the sixth, and allowed only one baserunner in the seventh.

Campbell was called out on strikes to start the bottom of the seventh, but Poulos followed with a double, then scrambled to third on a groundout.

Mauldin then followed by drawing a walk, after which South Stokes coach Rick McHone issued an intentional pass to Hinson, loading the bases to set up a force at any station. But McHone’s strategy was foiled when Jacklyn Almond worked the count full before watching Wilson’s delivery pass high, plating Poulos with the winning run.

Asked about his team’s struggles in the field, Bulls coach David Poplin said, “After an error we just keep playing…we forget it and just keep trying to make plays.”

Poplin added that Glover “struggled with her control early. It wasn’t that big of a deal. She’s figured out how to stay in games when she doesn’t have her best stuff before. She’s a pitcher not a
thrower or a slinger. She just has to get comfortable and find a way to finish strong, which she did.”

Unable to practice Monday because of severe weather in the area hampered the Bulls’ preparations for Tuesday’s game.

“Madison is tough and we knew she threw hard,” said Poplin. “We couldn’t prepare for her because the county office called for no after school activities due to the possibility of tornadoes and thunderstorms. So we couldn’t get our work in and it almost cost us.

“Hopefully we will be a little better prepared going up there and we will just keep doing what we’ve done all season.”