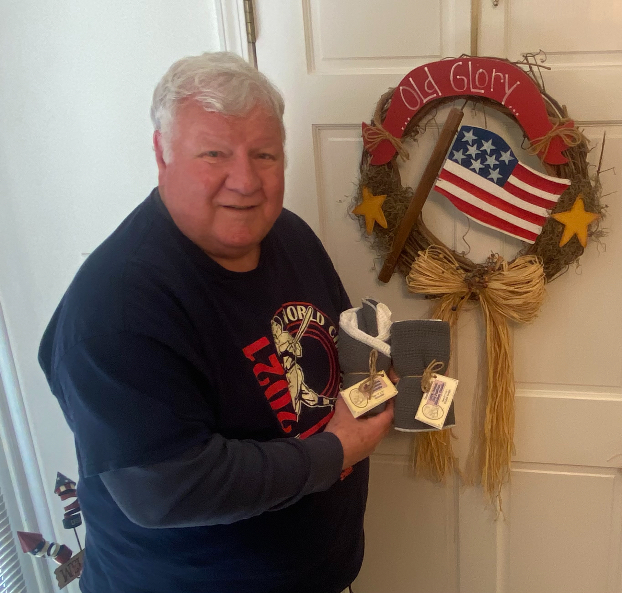 Pete Hogan with some of his Country Cottons products.

To many people, Pete Hogan is a successful businessman, known for manufacturing American-made cotton dishcloths through his Country Cottons company.

Having been in the business for more than 30 years, Hogan makes 5,000 dishcloths a week and ships them to 400 vendors nationwide, including local businesses such as Vac & Dash, Ace Hardware in Locust and Glory Beans.

While the cotton is cut, sewn and bundled together in separate locations, Hogan handles the logistics, including shipping, from his property in the western end of the county.

But there’s more to Hogan than just his dishcloth business.

An Air Force veteran, he served in Thailand during the height of the Vietnam War in the late 1960s before working as an air traffic controller at Charlotte Douglas International Airport for three decades.

“I’m 76 years old, so I’ve got an interesting life behind me with everything,” he said.

Joining the Air Force and meeting the love of his life

Originally from Concord, Hogan quit high school halfway through the 11th grade to enter the workforce and start making money.

“I was tired of having nothing,” he said, noting he grew up in a poor household.

Hogan was working in a cotton mill when “Uncle Sam knocked on my door,” in 1965. He could have joined any branch of the military but decided on the Air Force, to avoid heading to Vietnam.

His rationale was simple when his friend, who also enlisted, asked why they should join the Air Force.

Hogan began basic training at Lackland Air Force Base in San Antonio, Texas, where he was given a choice of four professions to pursue. He could become a military policeman, chef, photographer or an air traffic controller. The first three options were unappealing, so he chose air traffic controller, though he knew little about the profession.

Following his graduation from technical school at Keesler Air Force Base in Mississippi, where he learned the ins and outs of his new profession, he spent about a year and half at a base near Selma, Alabama, before volunteering to serve in Southeast Asia. 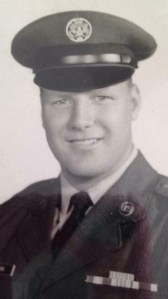 About a month before he was set to deploy, he met Toni at a skating rink in Concord. They spent every day together and vowed to continue their relationship, should each still be single, once he finished his duty overseas.

“I kissed her goodbye on her side porch and I told her, ‘I’m not going to ask you to wait on me,’ ” he recalled. “I said, ‘I don’t want you to ask me to wait on you. You do your thing and I’ll do mine….if we’re still single, we’ll get back together.’ ”

Shortly after, in October 1967, Hogan arrived in Nakhon Phanom, a small town in northeastern Thailand, near Laos.

Stationed at the town’s airport, Hogan’s job was to control the war planes coming in and out of the country. Though he was never directly involved in combat, he nonetheless saw his fair share of action.

Hogan recalls working late one night on the midnight shift. Situated in a van at the far end of the runaway, he was communicating with the pilot of an A-26 bomber plane coming back from dropping bombs in Vietnam.

“I got him down almost to the runway and said, ‘Take over visually,’ ” he recalled, before taking off his headset, assuming everything was normal.

But when he looked back at the runway, he noticed the plane had veered off course. When he opened the door of his van, he saw the plane’s propellers heading straight at him, before hitting a ravine and crashing about 150 feet from Hogan’s location. The nose of the aircraft was torn apart, but the pilots survived.

“That’s when I came to my senses and said, ‘You better get the hell out of here Hogan and you better get your buddies (who were asleep),’ ” he recalled, “because if he’s got a big bomb on there and that thing catches on fire … we’re in trouble.”

Hogan remembers another incident when about 16 planes, which were all low on fuel, were coming back to the airport during a thunderstorm when the commander of the first group crashed about two miles from the runway. A helicopter was sent  to look for the crash site — creating an interference in the airspace that the airplanes had to carefully avoid. With Hogan’s help, each plane flew above and past the helicopter, and arrived safely onto the tarmac without running out of fuel.

“We had to bring the airplanes over the top of the helicopter lower than we were supposed to to make sure they had time to get down and land safely,” Hogan said.

For his quick thinking in a tough situation, Hogan received an extra stripe and was promoted to the rank of staff sergeant.

He spent one year in Thailand before coming back to North Carolina in October 1968.

Once back in the United States and discharged from the military, one of the first things Hogan did was marry Toni in September 1969.

He had thought of her every day during his time in Thailand, which he said was the “longest year of his life.” Not knowing if she had moved on, he relied on his faith that things would work out as they should.

“I never feared because I trusted in the Lord that if he wanted me and Toni to get back together we would,” Hogan said.

The couple have been married for more than 50 years and have a daughter, Jennifer, who works for Stanly County Schools. He also has two granddaughters, Brooklyn and Jessalyn.

Following his exploits in Thailand, Hogan had no intention to continue a career in the aviation field.

“I swore when I came back from Southeast Asia I’d never control airplanes again,” he said.

But after a few months working in what he called the “civilized world,” he realized he missed being around airplanes.

So in October 1969, Hogan began his career as an air traffic controller for the Federal Aviation Administration at Charlotte Douglas International Airport.

As an air traffic controller, Hogan’s main responsibility was monitoring and controlling air traffic within the skies and making sure airplanes were properly sequenced as they took off and landed.

“We tell pilots where to go,” he said about the job.

Five years into his position at the airport, on the morning of Sept. 11, 1974, the worst moment in Hogan’s professional career occurred.

Eastern Air Lines Flight 212 had taken off from Charleston Municipal Airport and was headed to Chicago O’Hare with an intermediate stop in Charlotte. Hogan was working in the control tower, supervising a beginning controller, when two miles from the runway, Eastern 212 disappeared from the radar. They called the plane, but there was no response.

Seeing smoke billowing from outside, Hogan picked up his red crash phone and contacted the fire department. But it was already too late. The aircraft had crashed, killing 72 of the 82 passengers on board.

The pilot “flew that DC-9 into the trees,” Hogan said.

The National Transportation Safety Board released its final report in May 1975, concluding that the accident was caused by the flight crew’s lack of altitude awareness and poor cockpit discipline.

The insurance companies, which provided coverage to Eastern Airlines, sued several air traffic controllers, including Hogan, for millions of dollars. The lawsuit lasted almost decade before the U.S. Supreme Court, in 1983, let stand a ruling clearing the controllers and their employer, the federal government, from liability for the air crash.

Hogan and the other controllers were absolved of any wrongdoing. There was nothing they could have done to have prevented the crash.

William Stockton, an investigative reporter with the Associated Press, wrote a book about the incident titled “Final approach: The crash of Eastern 212.” He interviewed Hogan and included a short chapter about him.

Whenever asked how he started his dishcloth business, Hogan tells people that he never really planned for it.

“I literally stepped and fell in it,” he said.

Hogan and his wife loved going to flea markets and during one trip to a cotton mill in Monroe, they bought some dishcloths and “we loved them to death.” They went back several times.

Eventually Hogan, utilizing the business degree he received from Biscayne Southern College in Concord, decided to resell the products and opened his own shop in Locust. Whereas the mill in Monroe sold five for a $1, he turned around and resold three for a $1.

Once the cotton mill in Monroe closed, Hogan began looking into creating his own product. He was able to connect with a specialty mill in Newton, which utilizes cotton homegrown in the United States. Country Cottons officially opened in 1988.

Hogan and Toni initially took the rolls of cloth home and cut up to 1,200 dishcloths per roll themselves, though now someone else does it for them. The cloth is then sewn in Albemarle and inspected and bundled in Norwood before the finished product is sent back to Hogan to be distributed. 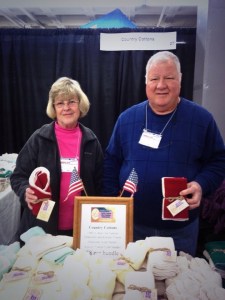 Pete and Toni Hogan at a Michigan Craft Show in 2015. Photo courtesy of Pete Hogan.

What helps separate Hogan’s products from others on the market is that once used, his dishcloths do not smell, he said. Also, because his products are old-fashioned and appear as if they are hand-stitched (it’s a secret how the cloth is processed), “99 percent of the food particles are going to wash out of this dishcloth,” he said.

Each product — from the dishcloths to kitchen towels to table napkins — comes with a tag affixed with a Bible verse of John 3:16, underscoring Hogan’s deep Christian faith.

He sells his products to vendors over the country, including to Lehman’s in Ohio and Made In The U.S.A. General Store in Missouri. Mast General Store locations throughout North Carolina has been selling Hogan’s products for more than 25 years.

“At one time they (Mast General) sold more of my dishcloths and towels in their stores than they did anything else except candy,” Hogan said.

Hogan briefly closed Country Cottons in 2010 because of the recession, but due to increased demand he opened back in 2013 and has not looked back.

“We’ve been overwhelmed ever since,” he said.

While many businesses struggled over the past three years during the COVID-19 pandemic, Country Cottons saw its sales skyrocket, largely because so many people were staying home.

“We’ve sold a lot more during COVID than we’ve ever sold,” he said.

When looking back on his career, Hogan is proud that he has succeeded despite growing up in poverty.

“My theory in life is this: I started with nothing and if I end up with nothing, I’m even,” he said.