STANLY THE MAGAZINE: Albemarle detailer has pride in taking cars to the ‘next level’ 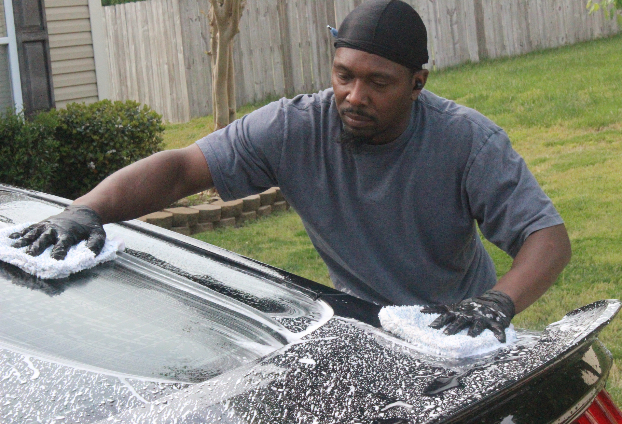 For the past 13 years, Mark Harrison has worked at Michelin in Norwood, where he’s held several roles. He built tires the majority of the time, but he recently switched positions and is a material handler for the retread warehouse.

He enjoys the work, but tries to save as much energy as possible. While other people might relax and enjoy their time off, for Harrison he simply switches gears to focus on his auto detailing business, Next Level Detailing, which he started last summer.

Harrison typically works on about five cars a week, usually on the weekends. He provides services associated with a detailing shop such as wax and wash, ceramic coating and paint enhancement and correction.

He said many people often mistakenly confuse a basic car wash with the much more in-depth detailing. While a wash is a surface clean meant to keep environmental debris from harming a car, an auto detailing is a maintenance service that extends the life of most external and some internal components of your car.

And it’s that maintenance aspect of “bringing a car back to life,” which Harrison, 43, enjoys so much.

“That before and after — that’s what drives me,” he said. “Because when I get a car and then when the customer comes back and picks it up and they’re like, ‘Oh, wow, is that my new car?’ It’s that right there” that keeps Harrison going.

How he got started

Harrison, who’s originally from Norwood and graduated from South Stanly High, never planned to get into the detailing business  though he always had a love for cars.

“Every guy, when you’re 16 or 17 years old, you think you’re doing something when you’re out here cleaning your car,” he said.

But it wasn’t until last year when his wife Chandra came home with some scratches on her black Jeep Compass that he began learning about detailing.

As someone who enjoys working with his hands, Harrison wanted to fix his wife’s car himself rather than pay somebody else. So he began teaching himself the same way so many people do nowadays — he started watching videos online.

Using his wife’s car as his first test subject, he successfully polished her car — and was impressed with his efforts.

“It shined better after I polished it than it did when we first bought it,” he said.

He posted a picture of his wife’s car on Facebook and many of his friends were impressed with the results.

Harrison then enrolled in a four-day detailing training course with Majestic Solutions in Raleigh to receive his certifications. 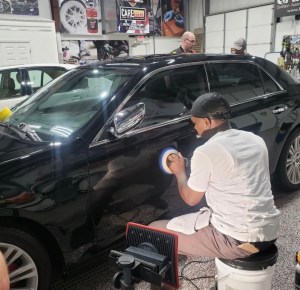 Mark Harrison works on a car during his training at Majestic Solutions in Raleigh. Photo courtesy of Mark Harrison.

Once he finished his training, he opened Next Level Detailing, which has the motto, “Keep it Tight! Keep it Right!” Harrison initially worked on his neighbors’ cars ,but gradually he became busier as his reputation began spreading through word-of-mouth. Harrison completes all of his work at his home in Albemarle.

“I take my time and put all my energy into every customer,” he said.

The goal of his business is to “restore and protect the longevity of the vehicle.”

Harrison’s had customers from all across the county, including Sunbelt Automotive, where he has spent the past few weeks working on several of its cars.

He also receives regular assistance from his 3-year-old son Kyrie, who loves utilizing the water hose whenever his father is outside working. Harrison would love if his son inherited the same passion for working on cars that he has.

“If it’s something that he may love doing later on in life, he can learn from his dad and he can take it on,” said Harrison, who has four children and two stepchildren.

His hours often fluctuate depending on what shift he’s working at Michelin.

For more information about the business, visit nextleveldetailing21.com.