Asian restaurant about to open in downtown Norwood 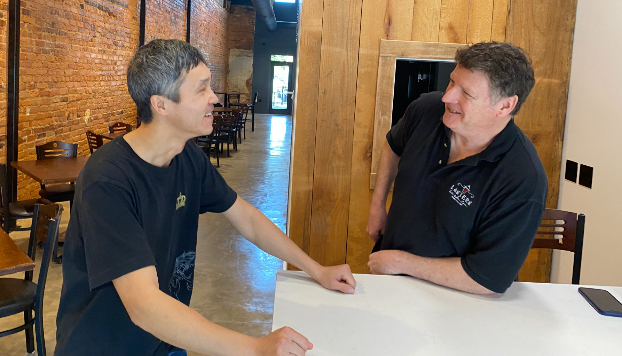 Co-owners Jimmy Li and father-in-law Rick DeRhodes are about to open their first restaurant in downtown Norwood.

Wanting to provide more opportunities to the community and keep people from having to travel to larger city’s like Charlotte for a higher-end meal, a Norwood resident and his son-in-law are on the cusp of opening their first upscale Asian restaurant.

“We hope to give people good food, good service and something that’s not offered here in Stanly County,” said Rick DeRhodes, who will be overseeing the restaurant with son-in-law Jimmy Li, who has 17 years of culinary experience in restaurants around the country, most recently at Sushi Bay 17, in Denver, Colorado. He wants Lantern Sushi to have as much of its food as possible come from local farmers and markets in the area. 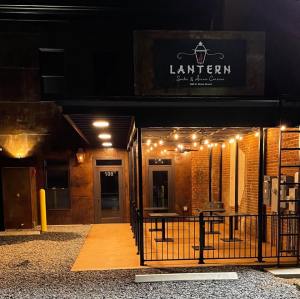 In addition to creating a space where people can enjoy their food, DeRhodes also wants to prove a point: Even though Norwood may be a small town, it is growing and it has the capabilities to support a variety of businesses, including more upscale restaurants.

“I’m hoping we show that you can be successful here in Norwood and encourage other people to come into this town and invest,”  DeRhodes said. “There’s some great people in this community that are committed to seeing and supporting growth here, especially in the downtown.”

Originally from Statesville, and having spent much of his career living in Charleston and Charlotte, where he owned his own distribution business, DeRhodes wanted to get away. So about three years ago, he and his wife moved to Norwood and built a house along the lake.

Able to relax and catch his breath, DeRhodes became enamored with Norwood’s quaintness and small-town charm.

Wanting to be closer to his daughter Kathryn and her family, including Jimmy and their three children, who were living more than 1,500 miles away in Denver, DeRhodes convinced them to come home to North Carolina, specifically Norwood. DeRhodes also thought Norwood would make a safer place for his grandkids to grow up.

With Jimmy having already carved out a successful name for himself in the Denver food scene as the majority owner and head sushi chef of Sushi Bay 17, DeRhodes thought his son-in-law could help open a similar restaurant in North Carolina.

Wanting to establish a footprint in a larger population center, DeRhodes said they looked at locations such as Concord, Harrisburg and Locust.

DeRhodes eventually got in touch with Robin Davis, owner of 110 Main Mercantile and head of the Norwood’s Central Business Development Group, who showed him the vacant building she owned next door. He bought the building in 2018 and that’s when he began to seriously eye Norwood as a possible spot for his restaurant. 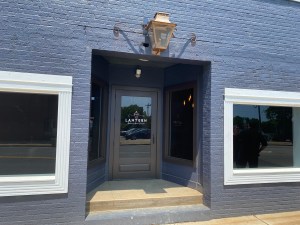 Lantern Sushi is located in downtown Norwood next to 110 Main Mercantile.

Though Norwood is not as big as some of the other cities and towns DeRhodes scouted, it did have something many of them lacked. If he opened an Asian restaurant in the town, there would be little competition and it would draw people from across the county who wanted an upscale experience but did not want to commute out of Stanly to get it.

Having already decided to open a restaurant, DeRhodes was at the town museum one day trying to find old pictures of his building when he came upon some 1940s yearbooks from Norwood High School, each with the same title: “The Lantern.” That’s when he had an idea.

“What better name could fit our desire to brighten our town and match the light of God’s blessings on all that are fortunate enough to live here?” he wrote on Lantern Sushi’s Facebook page, after having been asked many times how he came up with the name.

If you build it, they will come

It was a huge leap of faith for Jimmy to leave his prosperous business in such a major metropolitan city and start over in Norwood.

When he came to the town last September, he was skeptical that he could replicate in Norwood the kind of success he had in Denver with Sushi Bay 17.

“To tell you the truth, I was really worried about putting a sushi restaurant here (in Norwood),” Jimmy said. “I was worried about people not being used to eating raw fish.”

Wanting to get a broader picture of the food scene in the county, Jimmy went to several sushi restaurants in the area to scope out what types of fish are on the menu and how receptive the community is to what’s being offered.

“It was I think a little bit eye opening for him,” DeRhodes said.

Though still leery about the prospects of opening the restaurant in Norwood, DeRhodes was able to convince Jimmy of the upsides to investing in the town.

“I said look, the population base is much less (especially compared with Denver), but the thing is, we’re gong to be providing something no one else has and if we do it right, everybody will come here in the county,” DeRhodes said. “Everybody is going to come here once, we got to make sure they want to come back.”

DeRhodes plans to be open Monday through Saturday from 11 a.m. to around 9 or 10 p.m.

“We want to give people a good experience in dining out and we want to have a good atmosphere and good food and good service,” DeRhodes said.