Stanly Community College (SCC) recently released information on its spring graduates. The Class of 2022 graduated with personalized ceremonies May 12-13. 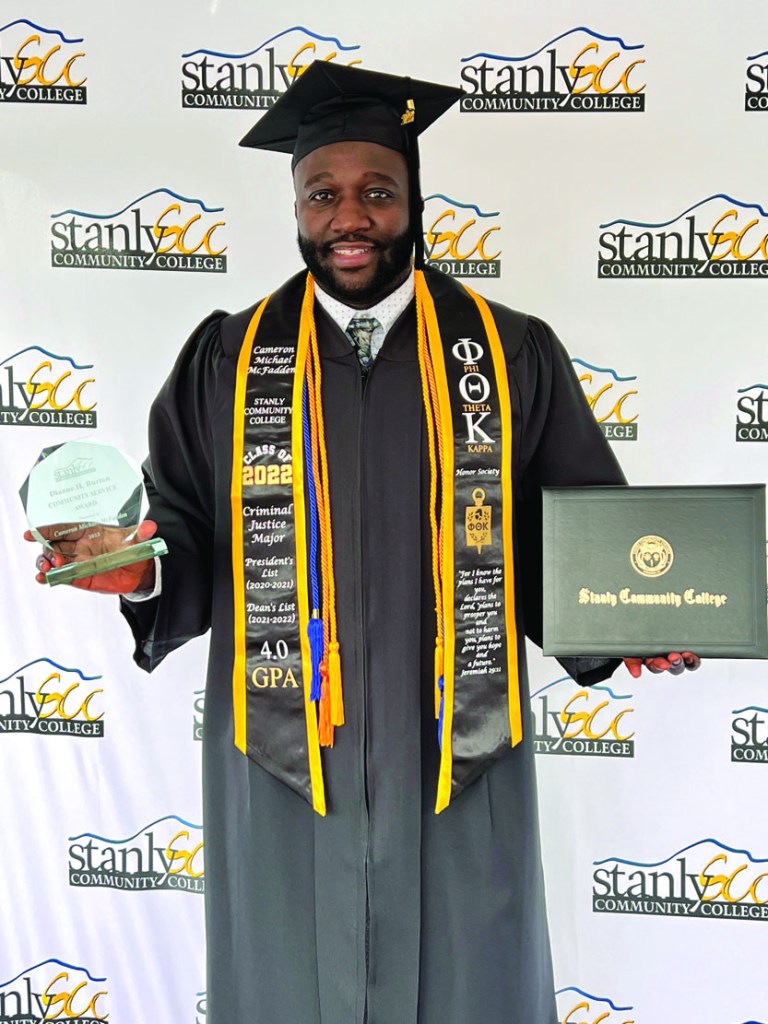 Cameron Michael McFadden, Criminal Justice Technology graduate, received the Dianne H. Burton Community Service Award that was created in 2006 to honor the service of the past college registrar. This award is presented to the graduating student that has contributed to the community through service learning. (Contributed)

Out of 471 total graduates, 179 individuals walked across the stage and received their credentials as faculty, staff, family and friends cheered them on. The decision to hold the drive-thru style ceremonies on the Albemarle campus was made in January in an effort to maintain social distancing standards due to the COVID-19 pandemic. 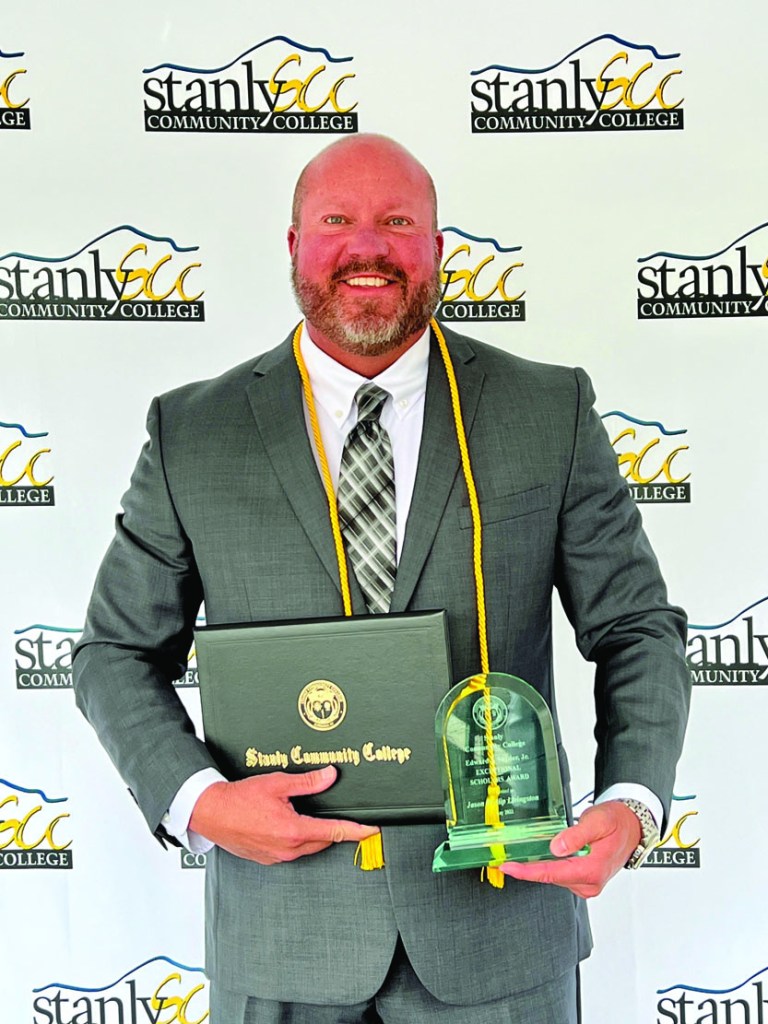 Three graduates received the Edward J. Snyder, Jr., Exceptional Scholars Award: Jordan Rose Moseley (Associate in Science), Kong Xoua Michael Moua (Associate in Arts) and Jason Phillip Livingston (Criminal Justice Technology). This award was named in honor of the second vhair of the College’s Board of Trustees. Snyder was a member of the State Board of Community Colleges and the first Chairperson of the College Foundation, a position he held for over three decades. His support of the college provided scholarships and other resources for SCC for nearly four decades. An award was established in 2002 in honor of his services. To qualify, a student must be nominated by a faculty or staff member, have at least a 3.0 grade point average, submit an essay, and complete an interview with a selection committee. All three recipients recorded graduation speeches to their classmates. (Moua and Moseley not pictured) (Contributed) 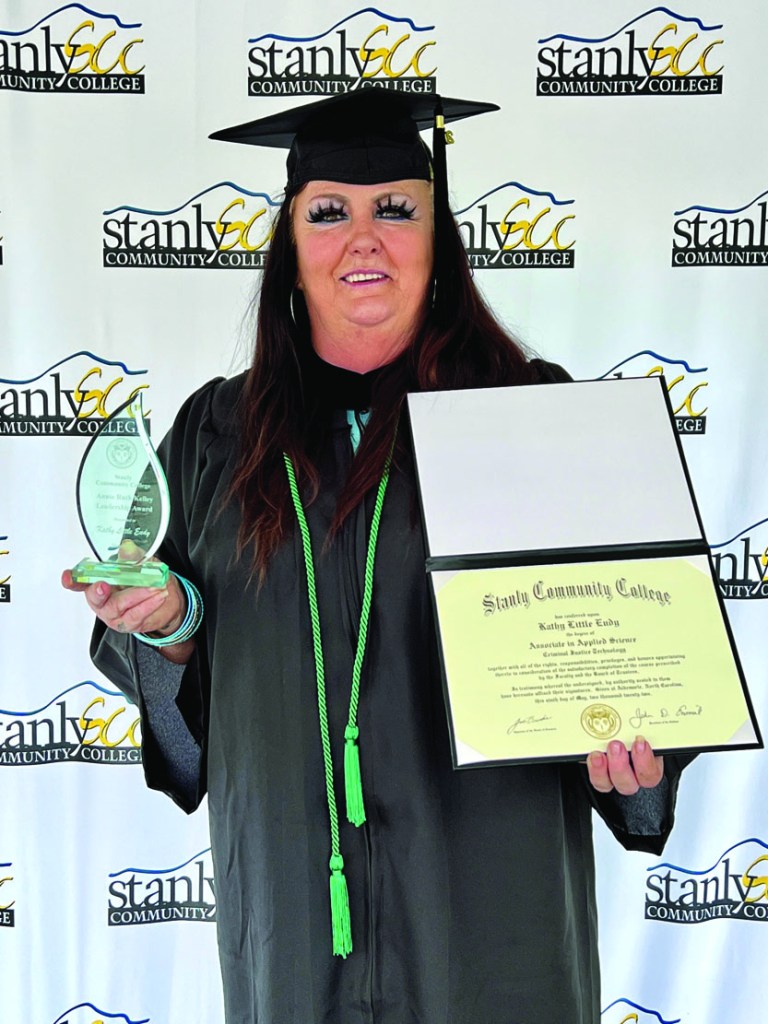 Kathy Little Eudy, Criminal Justice Technology/Emergency Medical Technician graduate, received the Annie Ruth Kelley Leadership Award. The Annie Ruth Kelley Leadership Award was created in 2001 to honor the service and leadership of the first chairperson of the College Board of Trustees and the first woman to chair a community college board in this state. Kelley served with distinction for 28 years as a College Trustee. In keeping with the tenets of Kelley’s record of service, this award is presented to the graduating student who has excelled in providing leadership to fellow students, the College and the community. (Contributed)

“As a former community college graduate myself, I applaud you in your efforts to persevere through completion of your credential,” said Enamait. 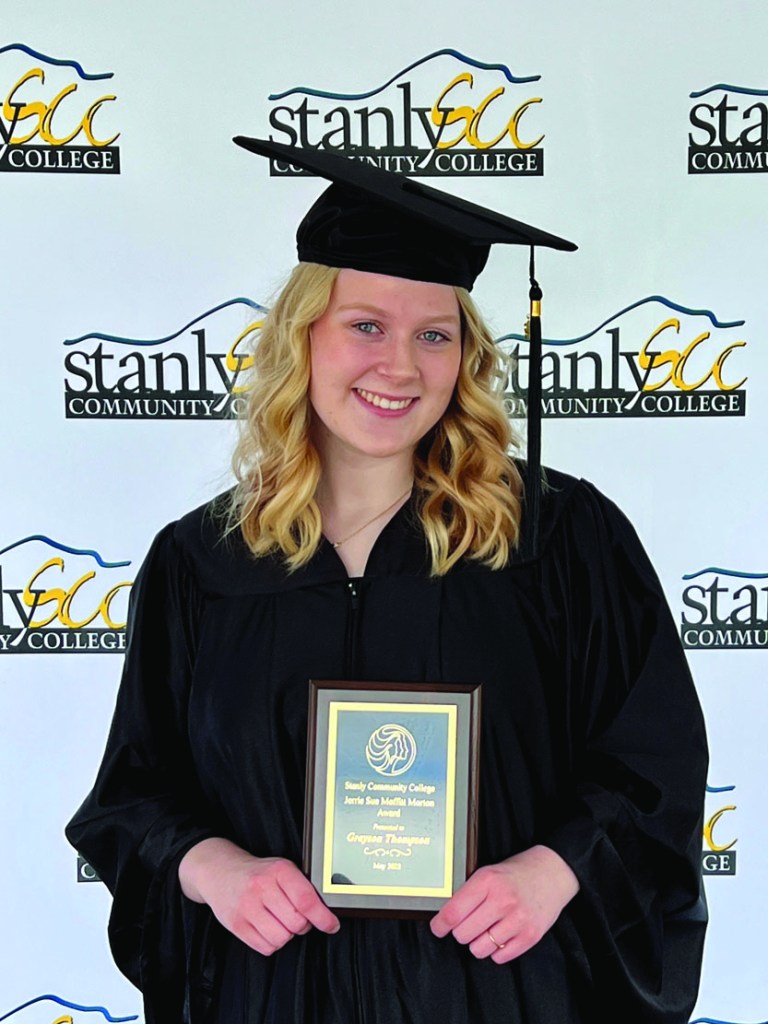 Grayson Thompson, Cosmetology graduate, received the Jerrie Sue Moffitt-Morton Award. The recipient for this award demonstrates the ability to overcome adversity, maintain integrity, and keep clients’ needs as their priority. The recipient will be known for putting others before herself while also possessing a fighting spirit when faced with life’s negative circumstances. (Contributed)

“On behalf of our Board of Trustees, faculty and staff, I salute you and look forward to hearing from you as you enter the next chapter of your life,” Enamait added. “Whether that is entering the workforce or pursuing a higher education degree at a partner university, know that we consider you family and welcome you back to campus at any time.” 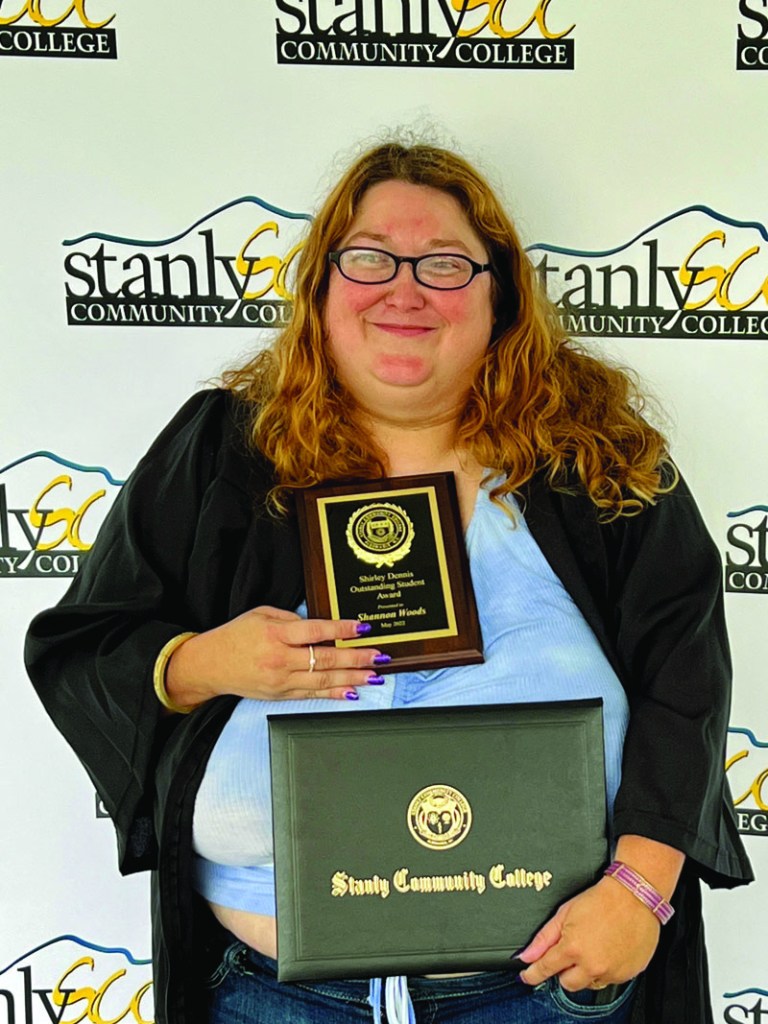 Parsons added: “We are proud of your accomplishments and would also like to congratulate and thank your families and those who have supported you through your endeavors.” 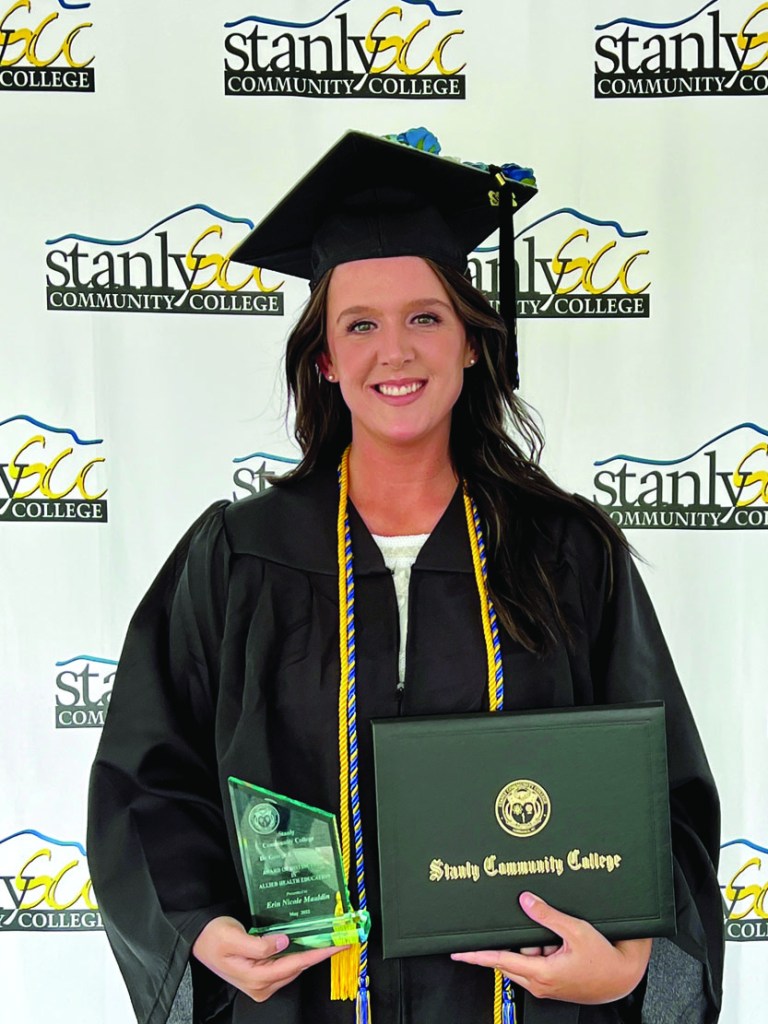 Erin Nicole Mauldin, Associate in Nursing graduate, received the Dr. George E. Eddins, Jr. Award of Distinction in Allied Health Education. This award is named in honor of an Albemarle physician whose support of the SCC Foundation has allowed hundreds of students to attend college. This recognition was established in 2003 and is awarded to an Allied Health student who must have at least a 3.5 GPA, demonstrated leadership ability, and a record of service to the community. (Contributed) 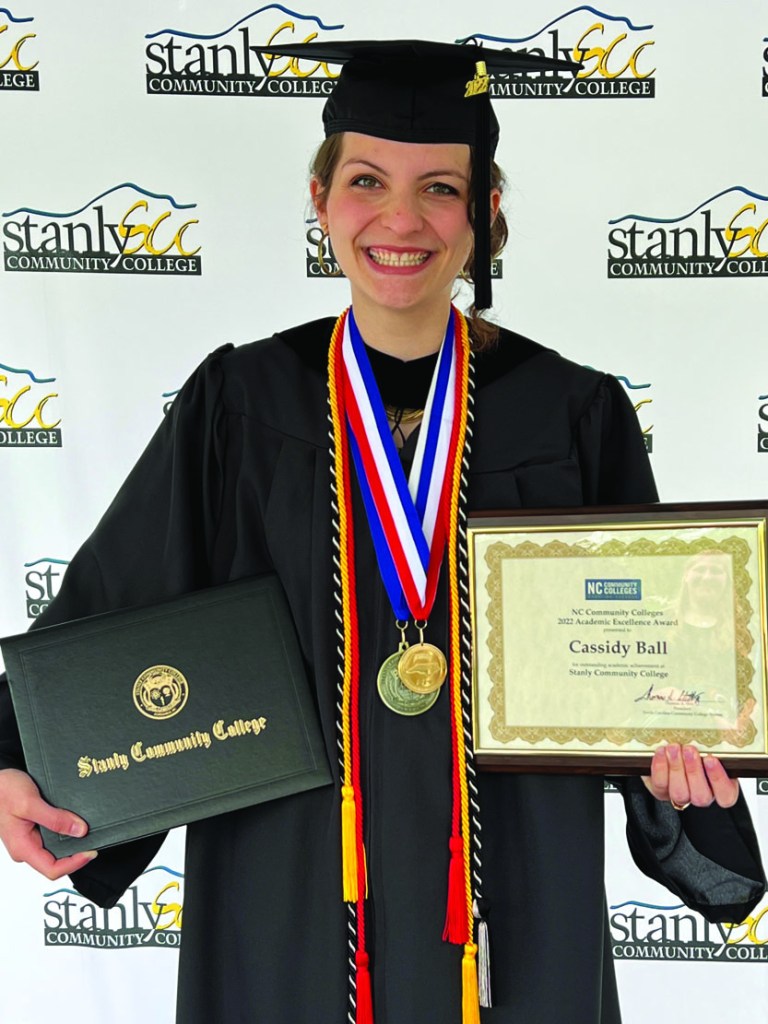 Cassidy Ball, Associate in Arts graduate, received the SCC nomination for the NCCCS (North Carolina Community College System) Academic Excellence Award. One student from each of the 58 North Carolina Community Colleges receive this prestigious award for academic excellence. In order to be eligible for this award, students must be currently enrolled, must have completed at least 12 semester hours in an associate degree program, and must have a cumulative grade point average of no less than 3.25. (Contributed)

David William Plyler, Class of 2014, received the Outstanding Alumni Award. Each year one or more Stanly Community College alumni are recognized for their contributions to the College, the community, and their profession. Eligibility for this award requires that the student must have participated at the college as either a curriculum, continuing education, or basic skills/literacy student. The SCC Executive Leadership Team then selects the award recipient out of the eligible nominations. (No photo available)

Asian restaurant about to open in downtown Norwood