On May 22, members of the Charlotte Writers Club came together with writers from across the state to celebrate the 100th anniversary of the club’s founding.

The gathering – “A Gala Like No Other” – took place at the Mint Museum on Randolph.

The Charlotte Writers Club traces its roots to 1922 when Adelia Kimball brought together a handful of aspiring writers for a tutorial on writing short stories.

In recognition of that meeting, the CWC created the A. L. Kimball Founders Award.

Joseph Bathanti, Poet Laureate of North Carolina from 2012-2014 and the author of a host of award-winning publications for which he was rewarded in 2016 with the North Carolina Award in Literature, delivered the keynote address.

As a prelude to his address Bathanti read a statement from the North Carolina Chapter of Writers for Democratic Action.
“The best tool for change,” the statement argued, “is to ‘book your vote.’ ”

In his keynote speech, Bathanti reminded those present of what was happening in 1922 when the CWC was founded: “Coal miners and workers were fighting for better wages and better working conditions, James Joyce was publishing ‘Ulysses,’ Mussolini was rising to power in Italy and books were being banned and burned.

He reminded the writers present that they have a responsibility to the word: “Our words and our stories — all stories — matter.”

When he moved away from history, Bathanti praised the ongoing work of the Charlotte Writers Club in encouraging fledgling writers, in particular the Student Engagement Initiative which began in the last year which includes virtual office hours during which students in Charlotte schools can seek help with writing assignments of all kinds.

The keynote address was followed by an award ceremony. Dede Wilson and Irene Honeycutt, previous winners of the Adelia Kimball Founders Award, presented the same to Meriam Ruth Morris Moose of Albemarle for “extraordinary service to the Charlotte Writers Club and to the greater writing community.” 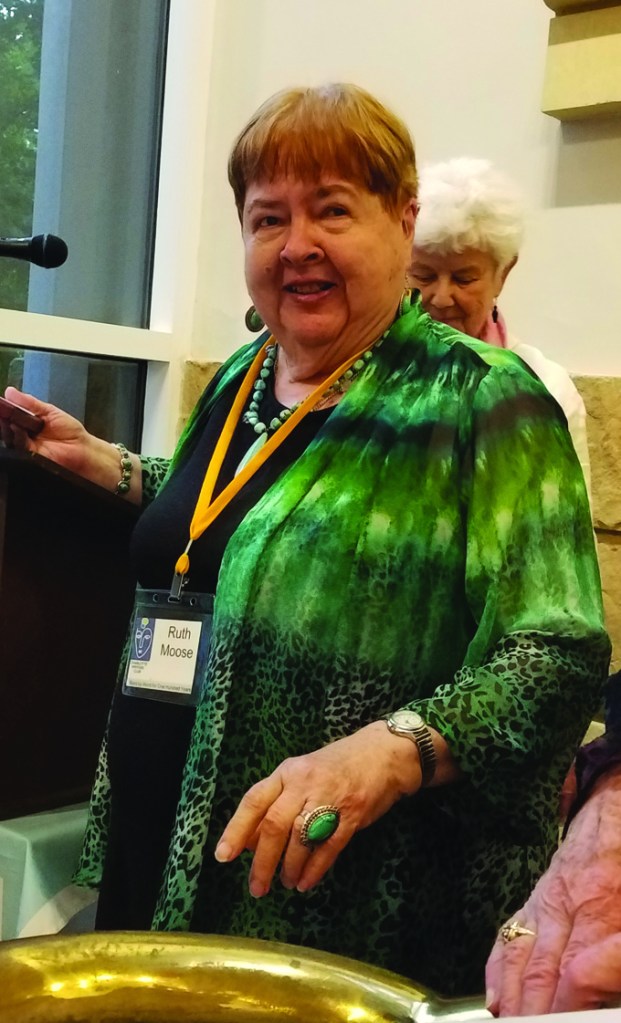 Ruth Moose accepts her award at the Charlotte Writers Club meeting May 22. (Contributed)

Citing Doris Betts, author of “The Ugliest Pilgrim” and “Souls Raised from the Dead,” Honeycutt asserted that “no other writer has produced a body of short stories that so deftly captures the Southern mindset, history and language.”

As a member of the Charlotte Writers Club, Moose served as secretary and program chair, and later helped to organize the North Carolina Writers Network.

Grateful to the club for encouragement in her early years, Moose endowed the Ruth Moose Flash Fiction Contest.

In a moment of reflection at the end of the evening, Caroline Kane Kenna, president of the CWC, imagined Adelia Kimball looking down at the writers who had come together, proud that her long-ago class in writing short stories had evolved a hundred years later into a community of writers involved in every imaginable genre.

David Collins, the president-elect of the club, closed out the evening by looking to the future.

He announced that the CWC has received a grant for $8,691 from the City of Charlotte’s Infusion Fund and the Foundation for the Carolinas and will use the funds to improve the club’s website – and that the celebration of the CWC’s centennial will continue on Oct. 2 when the club hosts Therese Anne Fowler, a North Carolina writer with a string of New York Times best sellers, to talk about her newest book, “It All Comes Down to This,” and of her life in writing.