Former Stanly County resident Jonathan A. Underwood is marking his first year as the second highest-ranking elected Masonic officer in North Carolina with visits to some of the 360 lodges around the state. 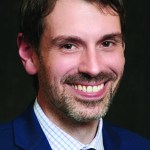 Underwood was installed last May as Grand Secretary of the Grand Lodge of North Carolina A.F. & A.M., based in Raleigh. In his position — the equivalent of a chief operating executive — he works with the Grand Master of Masons and the Grand Line officers to oversee a Masonic jurisdiction that covers all of North Carolina and its 33,000 member Freemasons.

He served out the unexpired term of T. Walton Clapp III, who retired after serving the Grand Lodge for 42 years (25 as Grand Secretary), and was elected to his first term in September.

Before joining the Grand Lodge office, he served as the public services specialist for NC State University’s Special Collections and Archives Department, and then as director of historic preservation for Stanly County.

His wife of 14 years, Jennifer, is a director of oncology strategy research in RTP. They have two daughters, Ali, 11, and Anna, 8.