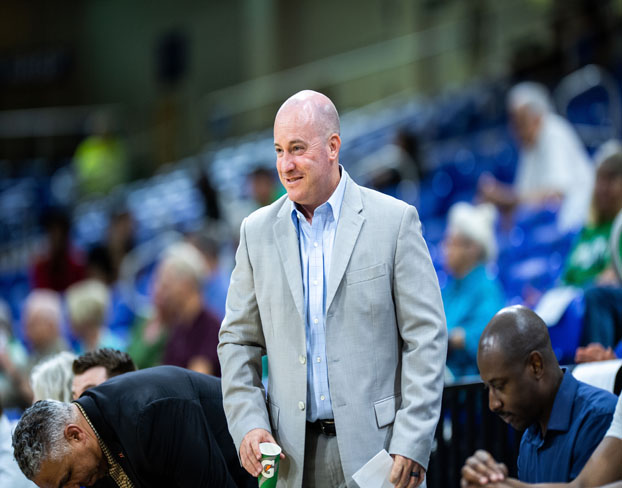 “I am really excited to add Justin to our coaching staff, as he’s someone I’ve known for over 20 years and have worked with previously. He’s relentless and an absolute bulldog on the recruiting trail, with a proven track record of signing high character, impactful players throughout his career,” Schertz said. “Just as important are his elite interpersonal skills, which allow him to connect with a broad spectrum of people and will be something I know our players will appreciate and enjoy. I could not be more pleased to add Justin, Jennifer and Ezra to our family and look forward to working alongside him.”

Furr brings more than two decades of coaching experience to the Sycamores. The veteran led the recruiting and development efforts at FGCU where he recruited the ASUN Player of the Year in 2018-19 in Schadrac Casimir as well as the 2020-21 Atlantic Sun Preseason All-Conference and ASUN All-Tournament Team guard Jalen Warren. He and the staff at FGCU signed the highest-rated high school recruiting class in program history in 2020-21, with three top prospects from the state of Florida including Tavian Dunn-Martin who was named the 2021-22 ASUN Newcomer of the Year and First Team All-Conference.

Furr also oversaw academics in which his team earned a 3.0 GPA or higher for seven consecutive semesters, setting a program record for team GPA in five-straight semesters.

“My family and I are very grateful for the opportunity to be a part of Indiana State University and the Terre Haute community. Indiana State has a rich history of success in one of the true hot beds of college basketball,” Furr said. “Coach Schertz and I have a relationship that has spanned over 20 years. He is one of the most well-respected coaches in the country at all levels of basketball. I am excited to learn from him and do whatever is needed to help achieve success. We look forward to planting our roots in Terre Haute and getting to work.”

Before joining the Eagles, Furr spent five seasons at Barry University including three years as the lead assistant.

In his last season with Barry, Furr helped guide the Buccaneers to a 23-9 record in 2017-18, advancing to the Elite Eight of the D-II NCAA Tournament for the second time in three years. In addition, Barry defeated Auburn – which won the SEC Regular Season Championship – in an exhibition contest to open the year. Barry made a school-record 391 3-pointers; in fact, Barry’s top four three-point total seasons came between 2014-18 with Furr on the sidelines.

In Furr’s five seasons at Barry, the Buccaneers made the NCAA Tournament each year, winning at least one game four times and advancing to the Elite Eight twice. Furr assisted Barry to an impressive 116-38 record (.753), including three-straight Sunshine State Conference championships. He also recruited the 2016, 2017 and 2018 SSC Players of the Year, in addition to three-time All-American Elvar Fridriksson. Furr was named one of the top-15 assistant coaches in the country by CoachStat.net.

In 2012-13, Furr served as an assistant coach at D-II Lynn University (Boca Raton, Fla.), where he served as a recruiting coordinator, worked with the team’s guards, scouted opponents, handled fundraising, coordinated academic mentoring and served all other facets of the program.

Prior to landing at Lynn, Furr was an assistant at D-II Newberry College from 2010-12 where he coached a conference first-team member in 2011 and the league’s freshman of the year in 2012.

Before Newberry, Furr served as an assistant coach at UNC Wilmington for four seasons from 2006-10. As the program’s recruiting coordinator, Furr assembled the No. 2-ranked class in the Colonial Athletic Association in 2007-08, according to Street and Smith’s College Basketball magazine. That class helped produce the largest turnaround among all D-I teams in 2007-08, going from 7-22 the previous year to 20-13.

He coached John Fields, who set the UNCW record for blocked shots in a season with 59. Furr also instructed Keith Rendleman, who finished his career among the top 10 in scoring, blocks and rebounds. Another one of his players, Chad Tomko, finished among UNCW’s career scoring, assists, steals and 3-point leaders.

Furr was the associate head coach at Saint Andrews Presbyterian College in 2003-04. There he coached Chad Eichelberger, who played professionally in Romania, in addition to logging stints in the American Basketball Association.

From 2001-03, Furr worked as an assistant at his alma mater, Wingate University. In 2001-02, his team advanced to the D-II NCAA Tournament, finishing 26-7. He coached Lorinza Harrington, who went on to play for the Denver Nuggets, New Orleans Hornets and Memphis Grizzlies. His two Wingate teams had a combined record of 44-18.

Furr’s coaching start began at Pfeiffer University in 1999. He was there for two years and made the D-II Sweet Sixteen after becoming the first team in conference history to run the table with an 18-0 record in 1999-00. Pfeiffer led the country in scoring that year. Furr recruited 1,000-point scorer Rico Grier and a trio of All-American performers.

Furr played at Wingate, receiving his Bachelor’s of Science in Sports Management in 1999. He and his wife, Jennifer, have one son, Ezra.