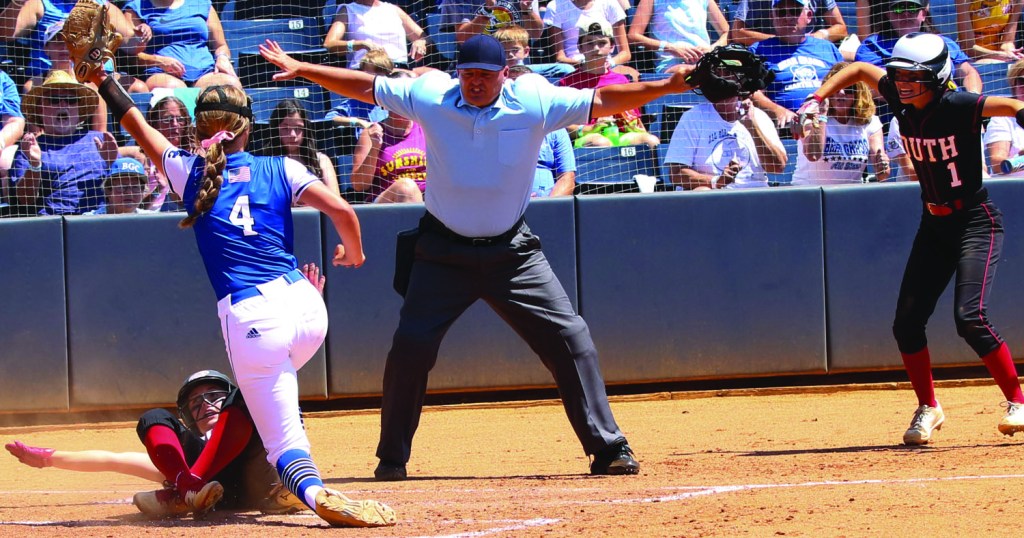 Mary-Ryan Hinson slides into home for a run. (Photo by SHANNON BYRD)

After a heart-stopping win in the opening game of the NCHSAA 1A Championship Series, the South Stanly coaching staff had a decision to make as to how they should approach game two.

“We always have a coaches’ meeting following each game,” said Bulls Head Coach David Poplin, “and as we discussed it, Matt (Little, assistant coach) mentioned that Ali (Glover) often has better spin on the ball the second day when she pitches two days in a row.”

“She has been our ‘go-to’ player all year,” said Poplin, “and she had struck out 16 in the first game, so we decided that she had earned the right to pitch again in the second game.”

And a wise decision it proved to be.

Coming off a 134-pitch outing on Friday, Glover exhibited impeccable control in Saturday’s matchup, effectively mixing speeds and location while scattering four hits, striking out nine and walking only one.

The senior pitcher’s masterful performance was backed up with consistent run support from a young Bulls lineup, resulting in a 4-0 shutout win over Bear Grass Charter to clinch the 2022 NCHSAA 1A title.

And, in the process, Glover was selected by media representatives covering the game as the series MVP. 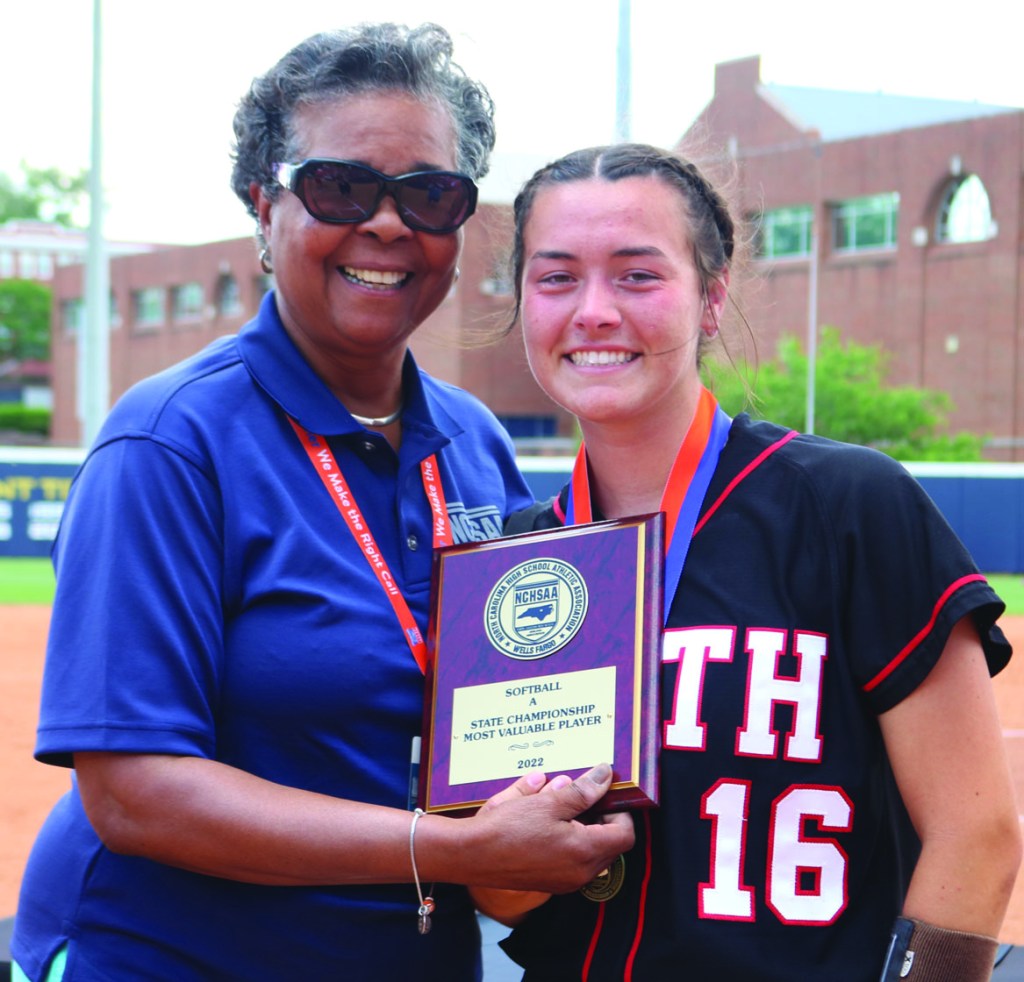 Ali Glover receives the Most Valuable Player award from Que Tucker, commissioner of the NCHSAA. (Photo by SHANNON BYRD)

South Stanly, the visiting team in the second game, struck quickly as Kassie Swink led off the game with a single, moved to second on an infield hit by Alexis Harward, and scored on a Mattie Poulos double, and added to the lead in the fourth when Mary-Ryan Hinson reached on a walk, moved to second on a sacrifice bunt by Jacklyn Almond, to third on a groundout, and scrambled home on a wild pitch.

Glover made quick work of the Bear Grass batters in the second and third innings, striking out the side in both frames.

The Bears threatened in the fourth inning as Emilee Perry led off with a double. A popup and strikeout followed, before Shelby Craddock lifted a two-out blooper to left field. The ball appeared destined to fall in, but for the second night in a row, freshman left fielder Kinsley Tyson made a diving grab to end the inning.

Harward tallied South’s third run in the top of the fifth, leading off with a double and advancing to third on an Emma Campbell groundout, before scoring on Poulos’s roller to second.

Hinson scored her second run, and her team’s fourth of the game in the sixth inning after reaching on a one-out double, moving to third on a groundout, and crossing the plate on a Tyson single.

In the final frame, Craddock led off with a single to left, but Friday’s hero, Cassady Smith, retired Addison Dotson with a grab of a foul ball in which she reached well into the stands in front of the Bear Grass dugout. Glover then proceeded to fan Kalie Smith and induce a come-backer from Kendall Furlough to end the game and set off a raucous celebration among the South Stanly faithful.

Poplin once again noted contributions from the entire team.

“Kassie (Swink) made a great play to end the first inning (a grab of a soft liner that appeared headed into center field), and Kinsley (Tyson) came up big in left field again,” he said.

“Hard work pays off,” added Poplin. “I’m so happy for our school, our players, and our coaches,” he said. “I’ve loved coaching this bunch.”

South Stanly loses only two seniors (Glover and Campbell) from this year’s team. 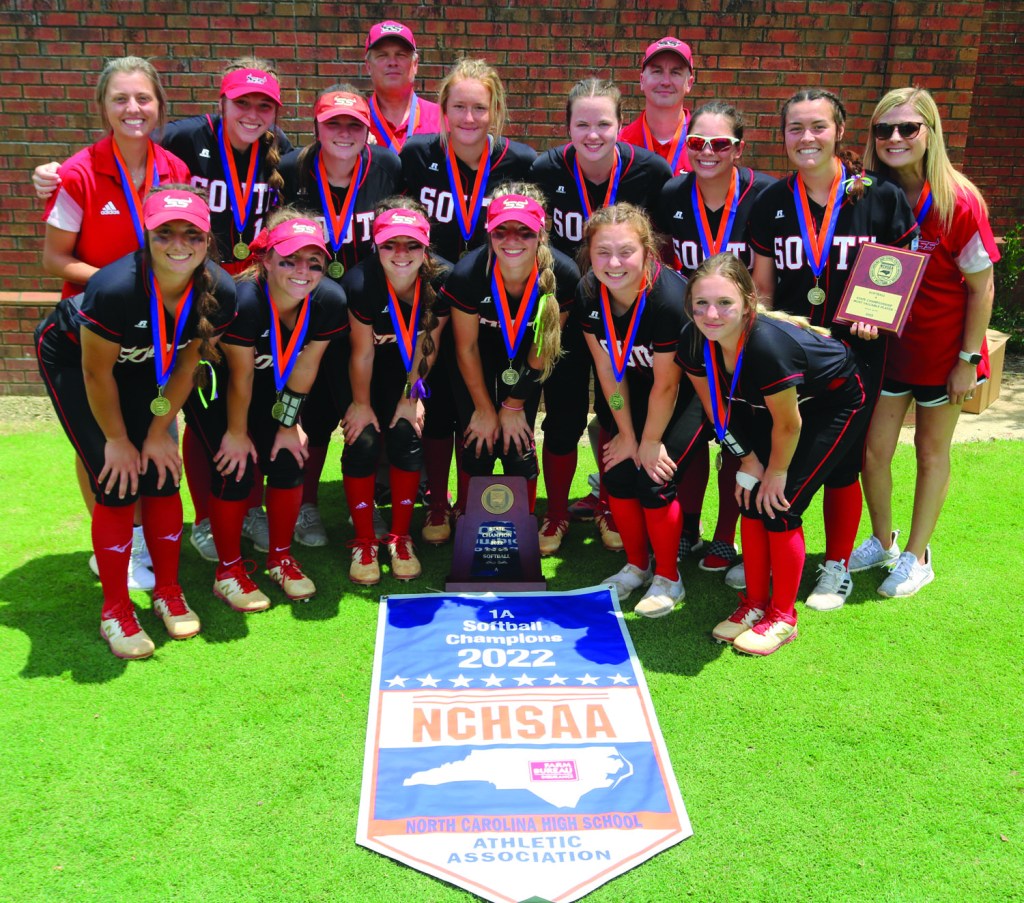