Shortly before 7 p.m. Friday, Albemarle Police officers responded to a report of a gunshot wound in the 200 block of South Morrow Avenue. 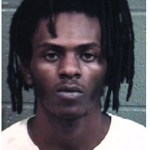 Emrich was transported to the hospital for treatment of non-life-threatening injuries. Preliminary investigation indicates Emrich was involved in a dispute with 21-year-old Albert Gregory Benjamin prior to the shooting.

Benjamin was arrested and charged with assault with a deadly weapon with intent to kill or inflict serious injury.