When you step into Jeff’s Barber Shop on North First Street in Albemarle, don’t expect to find a reception desk, appointment calendar or multiple hair stylists awaiting in neatly-spaced cubicles.

That’s not the type of shop Jeff runs.

What you will find is a traditional barber establishment with friendly service, which has operated much the same way since 1962 … a shop where a person can “get a haircut and do some horse trading, too,” according to Jeff Moore, who on May 14 marked 60 consecutive years as a full-time barber in his hometown.

Moore, who will turn 80 in October, adds that he has no plans to hang up the scissors any time soon.

“I’ll go until I can’t go,” he says, adding that the nature of the job requires those in the profession to often work past normal retirement age.

“If I had gone to work at Alcoa, or at one of the textile mills, retirement would have been taken out of my paycheck,” he said. “But, when you work for yourself, it’s up to you to put money back, and that’s not always easy to do.”

Moore, whose first shop was located in East Albemarle beside what was then the Dogwood Lanes Bowling Center, said that haircuts back then were $1. 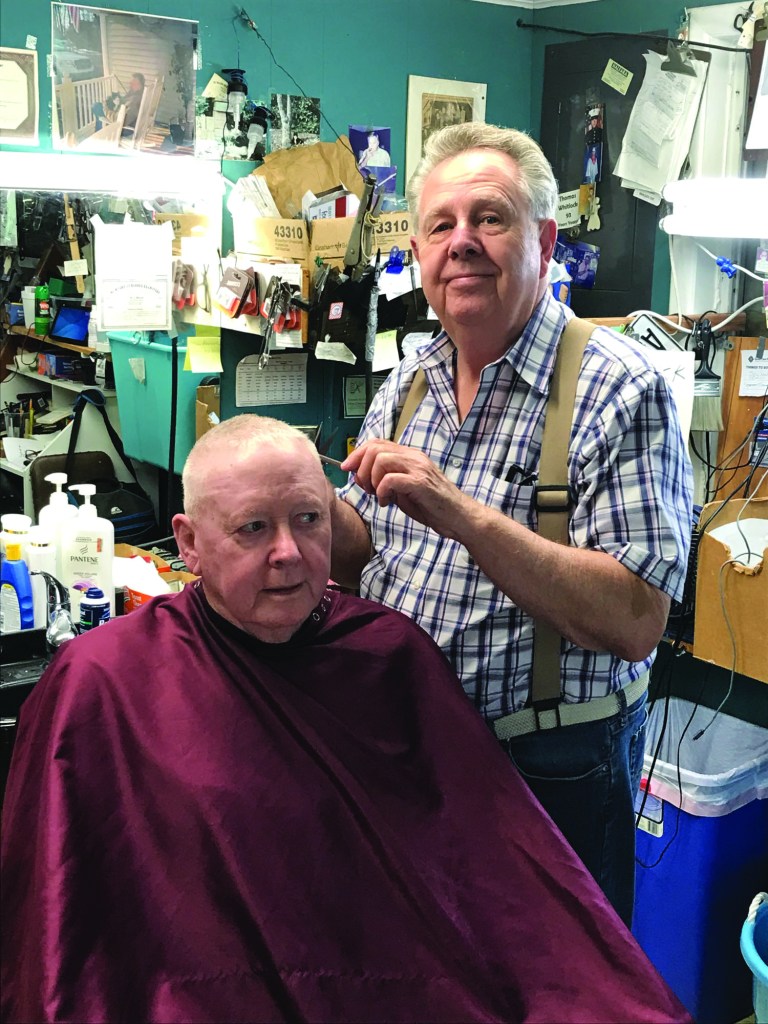 Ken Caudle gets a trim from Jeff Moore, who has operated Jeff’s Barber Shop for 60 years in Albemarle. (Photo by TOBY THORPE)

After 20 years beside the bowling center, Moore moved to another location — almost directly across the street, where he remained for the next 15 years before moving to his present location at 949 N. First St.

Unfortunately, according to Moore, traditional shops like his are no longer attracting the volume of business they once did.

“The ‘chain salons’ are pulling away some of our business,” he said, “and some of my long-time customers have passed on.”

Moore’s business model is much different from those of the more modern hairstyling salons. No appointments are required (or taken), and payment is accepted in cash only. His shop, lined with photos and memorabilia, has an almost museum-like feel.

“My wife says I need to clean the place up, but lots of people come in for the pictures,” he said, pointing out one large, professionally-done photo of Moore sitting with “The Rat Pack,” (Dean Martin, Sammy Davis Jr. and Frank Sinatra).

Upon being asked when it was taken, however, he confessed to foolery.

Moore has stuck with what has worked for him over the years. For example, some of his shop equipment has been with him since day one.

Dependability has been a Moore trademark throughout the years. When he says he is going to be open, he’s open.

“I’ve only taken two full weeks off in 60 years,” he said, citing a vacation to Las Vegas as one of those times.

Asked if he had cut hair for any celebrities, Moore singled out a well-known local one … former Albemarle Mayor “Whit” Whitley.

“You know, he never would let me trim those bushy eyebrows of his,” Moore laughed.

As he continues to provide haircuts to loyal customers — many of whom are veterans and receive a discount on Wednesdays — the longtime barber still loves his work.

“I’ve had a good life doing this, and I’ve enjoyed it,” he said, adding that he hopes he can continue for another 10 years.

“Maybe if I can keep it up that long, they’ll put up a monument to me,” he quipped.