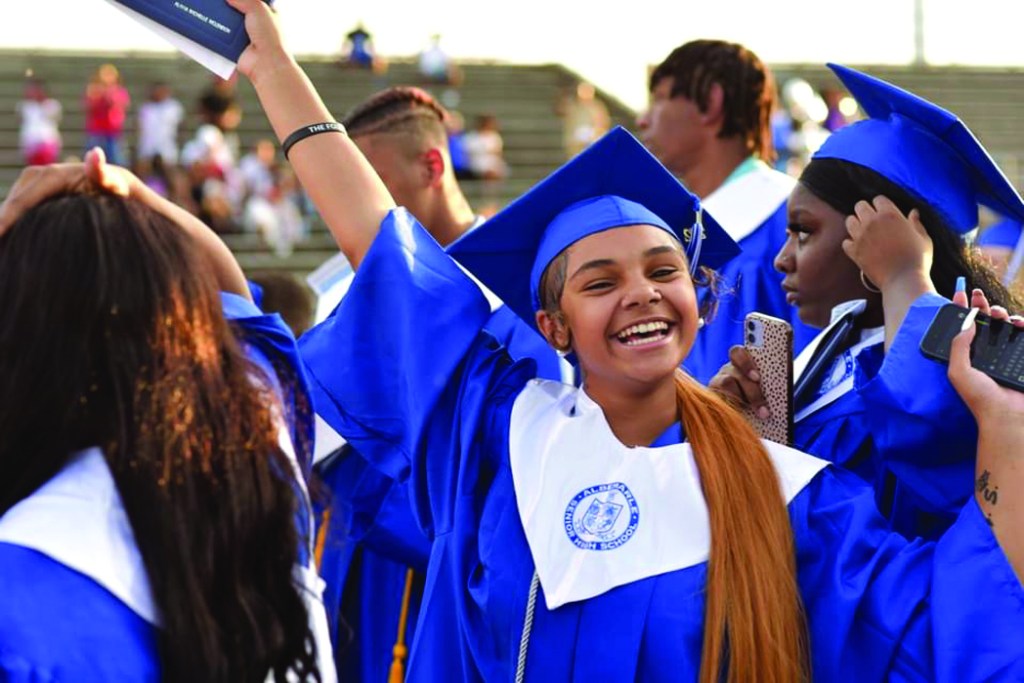 By Lucy Bennett, for the SNAP

Albemarle High School held its commencement for the class of 2022 outside at its football stadium.
School staff welcomed families into the home team bleachers for the long anticipated event at 7 p.m. Friday.

Twin sisters Serenity and Trinity Blackwelder, who were among the graduates, sang the National Anthem at the opening of the ceremony.

Seventy-nine students received diplomas as family and friends watched and cheered them on, with 28 of the students considered early graduates who completed the requirements in three and a half semesters or less.

The class of 2022 received $571,145 in college scholarship money, with many other students prepared to join the workforce or military next.

He urged them to continue to be fighters and game changers.

“You’re not the product of your environment but the consequences of your actions,” Pinkney said.
AHS English and theatre teacher Charles Carte was the keynote speaker for the commencement after being voted as the most influential teacher by students.

“It is often the people that have the least that are willing to give the most,” Carte said.

He expressed his awe at the kindness that these students have shown to others. He urged them to be genuine rather than cool. He quoted a favorite author James Baldwin at this occasion to advise that “not everything that is faced can be changed, but nothing can be changed until it is faced.”

He said although they may be told not to burn bridges, it is prudent to do so in some instances in order to keep them from returning to places they didn’t need to be to begin with.

Albemarle Principal Tanya Crisco reminded the class that she loves them one last time just as she often told them over the school announcements.

The principal shared that one of the graduates, Bryce Woodard, scored a perfect score on the Work Key’s test and was one of only two students in the county to do so on this assessment.

Numerous students expressed their joy for the occasion by striking a pose or performing a brief dance as they walked the stage to receive their diploma.

They excitedly tossed their mortarboards when they were officially pronounced graduates of Albemarle High.