North Stanly speaker, former coach, tells graduates: ‘To get in the game, don’t be afraid to get dirty.’

Mary Beth Bowers welcomed the overflow crowd, which exceeded the stadium’s home side seating capacity, closing with a quote from Walt Disney: “All our dreams can come true; if we have the courage to pursue them.” 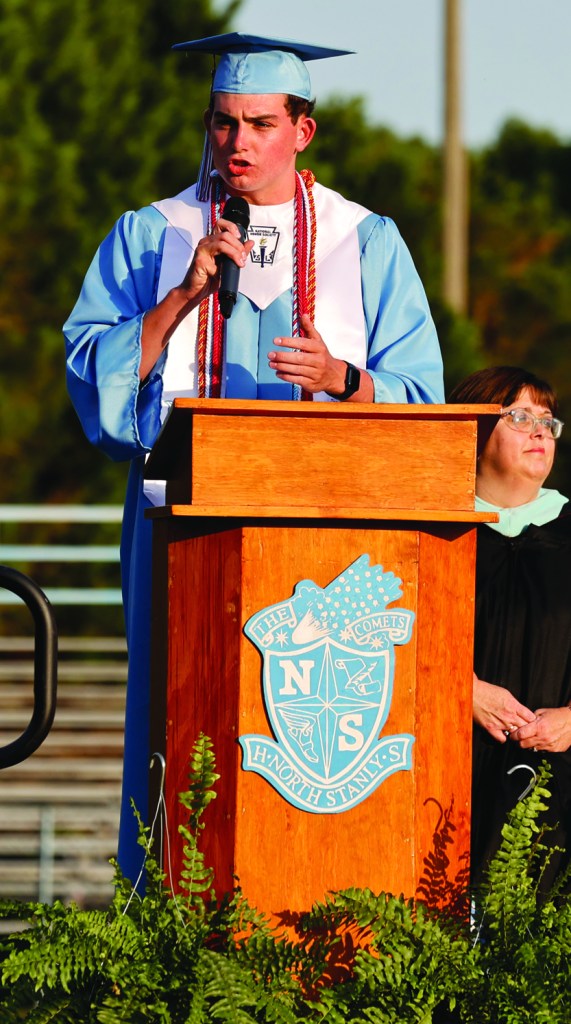 McGowan Barfield spoke of some of the challenges the Class of 2022 faced. (Photo by EARL BRADSHAW)

The first honor address of the evening was delivered by McGowan Barfield, who recounted the challenges met by the class of 2022.

“Remember that our class has succeeded against all odds,” Barfield stated, “and that will prepare us for what lies ahead.”

“We are leaving North Stanly better than we found it,” he added, pointing to the numerous academic, athletic and citizenship accolades earned by his fellow graduates.

“We have the potential to change our communities,” said Barfield before exhorting his fellow graduates with a quote from former New York City Mayor Ed Koch: “The fireworks begin today. Each diploma is a lighted match. Each one of you is a fuse.” 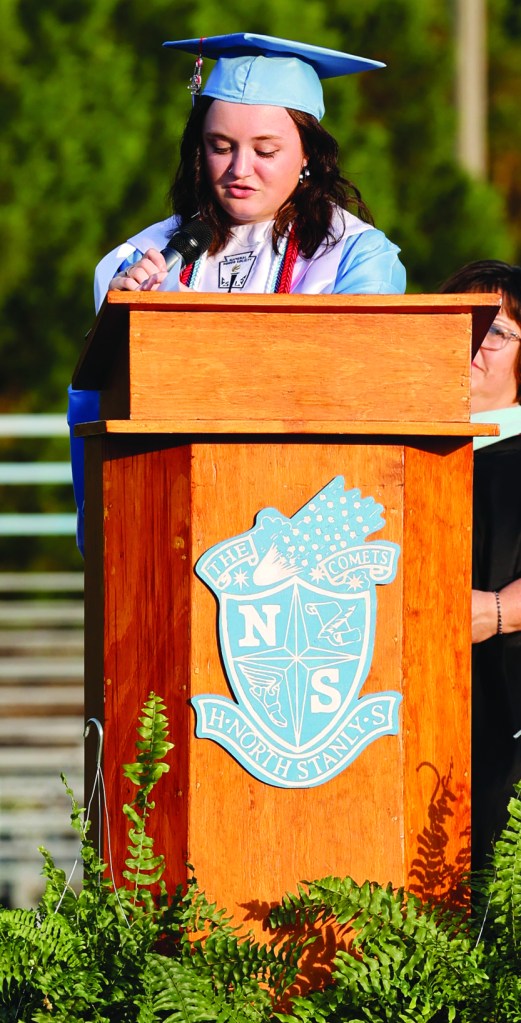 Tayler Franklin used words from her late grandfather to inspire the graduates. (Photo by EARL BRADSHAW)

Tayler Franklin imparted words of wisdom from her late grandfather in the evening’s second honor address.

“He would always tell us, ‘You can’t leave at 7 and get there by 7,’ ” Franklin said. “Life’s not going to last forever, so the time to begin is now.”

Another of her grandfather’s sayings related to pursuing one’s dreams.
“He said, ‘A man’s gotta do what a man’s gotta do,’ ” she recounted, encouraging her classmates to “pursue happiness…don’t stay stuck in one spot.”

Franklin closed by remembering another of her grandfather’s admonitions, “Remember who you are, and where you came from.”

“So, wherever you go and whatever you do, always remember that you come from North Stanly High School,” she said.

“We asked seniors, ‘Who is a staff member here who has been a positive influence for you?’ ” said Russell, “and Mrs. Carter was the choice of the class.”

Carter opened by asking the senior class to stand, turn around and face their families gathered in the bleachers, encouraging them and parents to take a photo.

“You are the pride of your parents,” she told the seniors.

Carter encouraged the class of 2022 to make a difference in the lives of others as they started to make their own way.

“Nothing is more eternal than the impact you have on others,” she added.

She also encouraged the seniors to persevere through rough times, and to believe in themselves.

“Don’t let adversity define you,” said Carter. “This is the USA…you can achieve anything if you are willing to give the effort.”

But Carter, a former athlete, youth baseball coach and umpire, cautioned the graduates that achieving such goals can be difficult and not-so-glamorous.

“I’m going back to my baseball days,” she said, “and I always told my players that if you didn’t get your uniform dirty, you probably weren’t playing hard.

“So to get in the game, don’t be afraid to get dirty,” said Carter.

Her remarks also included a number of tips for success in life, some gleaned from fellow teachers and others from her own experience.

“Stay true to yourself,” Carter encouraged, noting that, “confidence and humility go hand in hand.”

In closing, Carter reminded the students of the importance of hard work, a positive attitude, and making good choices in life.

“Your work ethic will define you,” she said. “So be the best you can be every day.

“I count my blessings every day,” she said, and “the choices you make will make a difference,” noting that one of her personal best choices was to marry her husband, Wayne.

As for bad choices?

“You are going to make some bad choices along the way, too,” Carter said. “So learn from them!”

Following the commencement address, diplomas were distributed to the members of the class by North Stanly administrators, after which parents were invited to come to the field to congratulate their graduates.