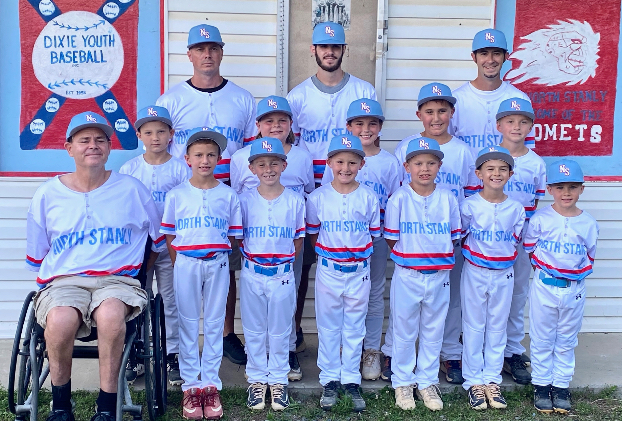 A group of 11 7- and 8-year-old Dixie Youth baseball players from four teams across North Stanly recently formed an all-star squad and is set to play in the 2022 NC Dixie Youth Division 2 AA state tournament next month in Leland.

“They were drafted from each team,” said Allison Wensil, who’s son Luke is the team’s catcher. “They had to earn it to make it to All-Stars and now they are going to the state tournament. This is big because none of us on this team have ever been this far. That’s really cool.”

The North Stanly Comets were given the opportunity to play in the state tournament after defeating the West Stanly Americans in the district championship.

But in order to have the opportunity to compete against other teams on Dixie Youth Baseball’s biggest stage, the North Stanly players need some help from the community. In order to pay for travel, food and lodging expenses, the team is wanting to raise $12,000, according to Wensil. They have already accounted for $6,000.

In order to raise the other half of the money, players and their families will begin selling tickets on Tuesday for a raffle. An individual tickets costs $10 or people can purchase six for $50. Some of the notable prizes include a $500 boat rental (all-day pass for a pontoon boat), a photography session and a yeti cooler.

The deadline for donating is July 1. The team will head to Leland on July 8 and pool play begins the next day. The winning teams from each state tournament will travel to Dothan, Alabama to represent North Carolina in the Dixie Youth Baseball Division 2 World Series beginning July 29.

The players began the season in March and it concluded at the end of May.

Anyone wanting to purchase tickets or provide any monetary donation can contact Wensil at 704-961-8799.