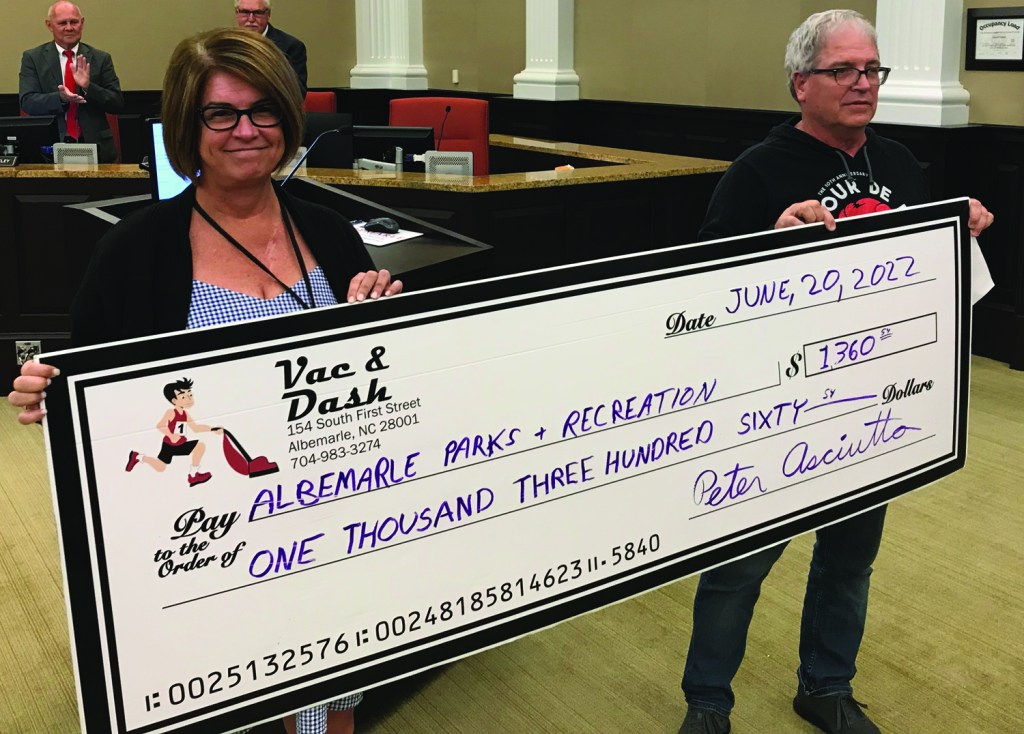 At Monday night’s Albemarle City Council meeting, former Vac & Dash owner Peter Asciutto expressed his thanks for the support and “business friendly environment” fostered by the city during his 18 years as a downtown business owner. He also presented a donation of $1,360 to the Albemarle Parks and Recreation Department. Pictured are Lisa Kiser, director of parks and rec, and Asciutto. (Photo by TOBY THORPE)

Albemarle City Council, by a 6-1 vote, approved the creation of a downtown social district at Monday night’s regular meeting.

Albemarle Downtown Development Director Joy Almond reviewed key points in a powerpoint presentation centering on the advantages of establishing such a sector.

“As part of House Bill 781: ‘Bring Business Back to Downtown,’ ‘Social Districts’ were added with the intent to increase foot traffic for businesses that have struggled since the beginning of the COVID pandemic,” Almond explained, “and this bill empowers municipalities to allow people to buy and consume alcoholic beverages within a defined area.”

Almond went on to note that the bill prohibits visitors from bringing their own alcoholic beverages into the district. Visitors are also prohibited from taking a beverage from one establishment into another one that also serves alcohol.

“Social Districts are a hot topic in many North Carolina communities,” added Almond, noting Kannapolis and Norwood as two nearby municipalities who have adopted these in recent months.

In response to a question from Councilman Dexter Townsend, Almond noted that hours for alcohol consumption in the district would be from 10 a.m. to 10 p.m. seven days a week, with morning hours having been considered in relation to the “Brunch Bill,” which permits alcohol sales at restaurants prior to noon on Sundays. 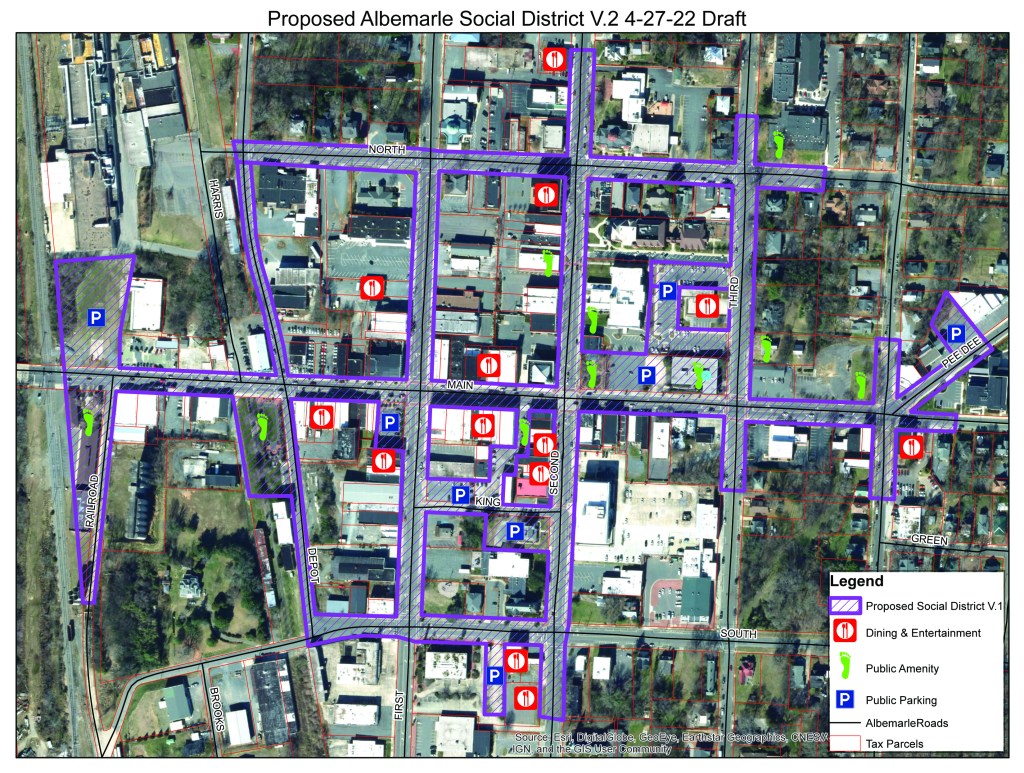 Councilwoman Shirley Lowder asked Almond if alcohol would be allowed only on sidewalks within the district.

“People with alcohol can cross the street within the district,” Almond replied, noting that such districts are customarily enforced via signage for boundaries, adoption of a plastic cup of a designated color, with logo or sticker that signifies a beverage was purchased at a business within the district, and establishment of receptacles for discarded cups.

Josh Wiggs of Badin Brews spoke in support of the social district, offering observations he had noted from other cities who had adopted them.

“Currently, businesses here in downtown Albemarle are closing at 5 p.m.,” said Wiggs. “If the social district is adopted, the resulting increase in foot traffic will encourage them to stay open later. In addition, it will encourage more festivals and downtown activities to take place.”

Almond added that she had found no negative feedback from towns and cities that have recently adopted social districts.

Upon a motion by Councilwoman Martha Hughes and a second by Councilman Benton Dry, the motion passed with Lowder dissenting.

Before the downtown social district can be implemented, the state ABC Commission will need to approve the city’s social district registration. Pending approval, the city expects the district to begin in August.

In other business, council members:

● Delayed action on a rezoning request for a six parcel, 4-acre section on Johnson Street and U.S. Highway 52;

● Approved participation by the Public Utilities Department in a group purchase (through ElectriCities) of pad-mount electrical transformers;

● Set the week of July 25 for work sessions to review the Stormwater Master Project Plan;