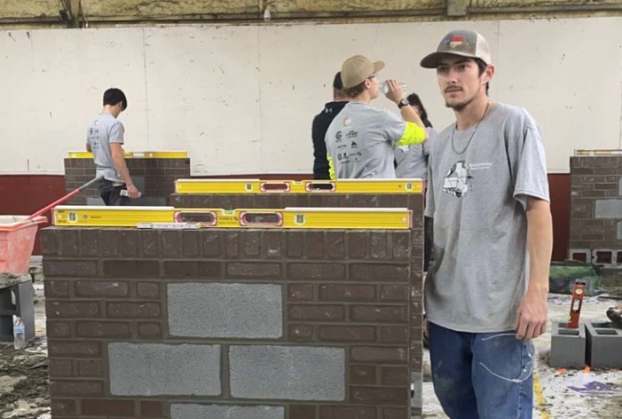 From an early age, Nathaniel Myers had a dream of some day pursuing a career in brick masonry. One of his friend’s fathers was in the profession, and it was always something Myers wanted to get involved with.

He got his chance once he came to North Stanly High School. Beginning his freshman year, Myers enrolled in Matt Almond’s masonry classes and quickly found he had a knack for craft.

While masonry is often thought of as technical with brick masons adhering to a set of plans, Myers said it can also at times be viewed as an art form, where talented masons create sculptures that will stand the test of time. Myers said one of the most gratifying aspects of masonry for him is the actual process of creating something tangible that was not previously around.

“It’s amazing to see what you can create from absolutely nothing,” he said. “You can take some brick and mortar and put it together and have something that’s absolutely beautiful.”

Throughout the summers and on the weekends, Myers worked various masonry jobs alongside Almond.

“He worked extremely hard on the job site and he has a willingness to learn and he’s already ready to jump in there and help with anything I need to have done,” Almond said.

As he’s honed his skills, Myers has entered several competitions, testing his brick-laying prowess against other talented young people in the area. In 2021, he took second place in the North Carolina Junior Spec Mix Bricklayer 500 regional competition with a brick count of 255.

He found even more success this year, placing second out of more than 30 students during the first North Carolina Career and Technical Education Southwest Regional masonry event at the Rowan County Fairgrounds in February. He also secured second place in the SkillsUSA statewide competition in Greensboro in late April. During each competition, Myers and the other competitors had three hours to lay an eight-inch wall out of brick and block which involved meeting specific criteria.

In his eight years teaching masonry at North, Almond has mentored many talented brick masons, but what separates Myers, whom he refers to as his “standout,” has been his dedication and willingness to put in the extra work and continually improve. He also became a leader to many of the younger students, especially once remote learning ended.

When the school transitioned back to in-person learning, Almond said Myers — then an experienced brick mason — was pivotal in helping to drum up support and interest among students for masonry classes.

“Coming back out of the pandemic…I was having a real hard time getting students motivated and interested, but once they saw him being successful in the competitions…that got some of their attention” and helped attract more people to the classes, Almond said.

Now that he has graduated, Myers plans to become a full-time bricklayer. He has one specific goal he’d like to accomplish.