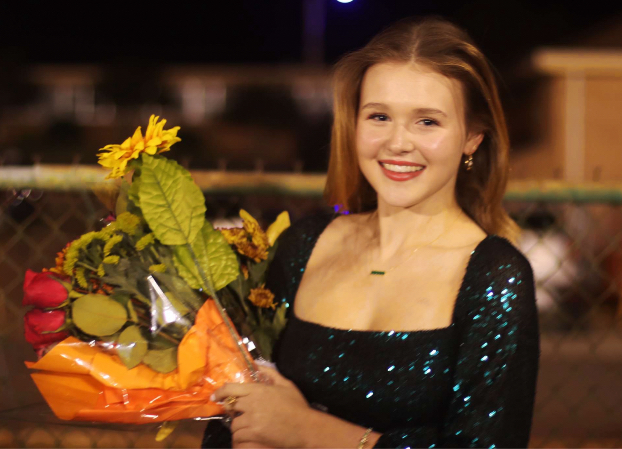 Stella Griffin has a steady, mature perspective and outlook on life that belies her years.

Though only 18, the West Stanly High School graduate has learned the skill of not necessarily sweating the small stuff — especially in light of the hurdles she’s overcome in her life, most notably a major cancer battle.

“I’ve definitely become a lot less stressed out even from freshman year to senior year,” she said. “As I’ve gotten older, I tell myself, ‘You’ve done so much and you just got to breath for a little bit and let things happen as they’re going to happen.’ ”

In 2011, at the age of 6, when most children first begin to read or ride a bike, Griffin was introduced to something entirely different when she was diagnosed with acute lymphoblastic leukemia, a type of cancer of the blood and bone marrow that affects a person’s white blood cells.

“I had no understanding of cancer or really how serious it was,” she said.

While her parents were crying and struggling with the news, Griffin was excited about the prospect of missing school.

But as she spent most of her time at Levine Children’s Hospital in Charlotte, she missed being around her classmates and teachers. Even when she was home from the hospital, she couldn’t be around others due to her weakened immune system.

It was only as Griffin got older and progressed through her chemotherapy treatment that she was able to realize just how sick she had been.

To give her something to look forward to, Griffin’s family created a countdown board and each day she received chemo, she was one step closer to completing her treatment.

She was on her way home from the hospital in 2013 when doctors called her mother to let her know the cancer was in remission. Not knowing what that word meant, her mother translated and told Griffin her cancer was gone.

“She rolled down the windows and started playing music and everybody was just really happy,” Griffin remembers.

About a decade since receiving the good news, Griffin still goes back to the hospital once a year for a check-up.

“The odds lower with every year it doesn’t come back,” she said.

While her cancer battle has certainly not defined her life, it has played a key role in shaping the person she’s become.

“I think that having cancer has definitely defined my perspective on life because when you go through something so difficult at such a young age, then the things that come after just don’t really feel like a big deal,” she said.

Many people she meets who don’t know her backstory are often curious about why when situations arise that would worry or fluster most people, she often remains calm and focused.

“They really just don’t know that I’ve seen a lot worse,” she said, “because a test or a game or somebody being mad at you or a break-up, isn’t going to feel as big when you’ve been in a life or death-type situation.”

Embracing her time as a high school student

After missing so much time away from school when she was younger, Griffin has come to appreciate being a full-time student and everything that comes with it including challenging herself academically with difficult classes, becoming involved in multiple sports and forming relationships with her teachers and classmates.

“Stella began her career as a high schooler the same year that I began at West. So, we have shared the years together,” principal Anne McLendon said. “While many of the moments have been tagged with a COVID label, Stella has not missed a beat. She is a go-getter ready to accept any challenge. I have never seen her without a genuine smile on her face and you know what they say about smiles….they are contagious!”

One of her most rewarding high school experiences was making the soccer team last year. Though it was sport she knew little about — she previously played volleyball and ran track — she knew the team needed an extra player and wanted to give it a shot, especially after being isolated for so long due to the pandemic.

“Coming out of COVID I was just aching for some kind of social interaction,” she said, noting how difficult it was getting through her junior year working from home and taking almost all AP courses.

In addition to making new friends, her experience on the soccer team showed her the importance of trying new things, even if it can be a little uncomfortable at first.

“To get to play and to make new friends, it was just a lot of fun and I feel like it taught me that spontaneity is good sometimes,” she said.

“It has always been so important for me to do well in my classes because I knew that success at the high school level would lead to greater opportunities after graduation,” she said.

Griffin has also enjoyed taking a variety of art classes during her four years, where she can interact with similarly like-minded creative individuals.

“As an art student she is creative and hard working … she is a perfectionist in every sense of the word … she is very humble in her critiques though her work is outstanding,” said art teacher Randy Fike.

With her time at West Stanly now complete, Griffin, who enjoys writing, will attend the University of Carolina at Chapel Hill in the fall and major in journalism, with plans to eventually go to law school.

“I’m not going to know everything that I’m about to do yet, but I think that I am looking forward to the freedom that comes with being able to make my own decisions,” she said.