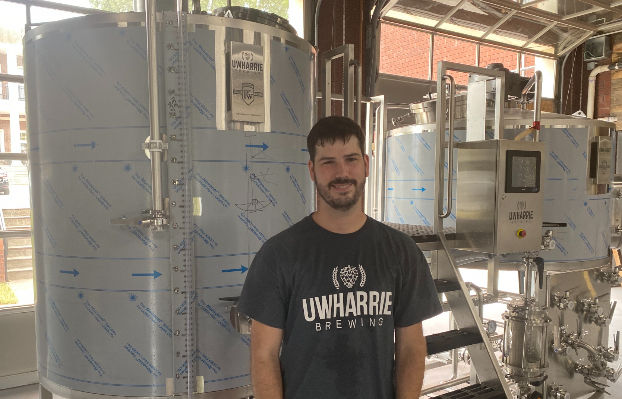 Colton Baker is set to open Uwharrie Brewing, located behind Albemarle City Hall, by the end of the summer.

Colton Baker has always had a passion for making and consuming beer. After working and learning all the ins and outs of the brewery business over the past decade, the 30-year-old will be opening his own business, Uwharrie Brewing, in downtown Albemarle by the end of summer.

It will be the county’s second brewery, after The Brew Room in Locust, which opened last month. Uwharrie will be in the old fire station behind City Hall.

Baker decided to open his business in downtown as a way to help further revitalize the area and provide something for people to get excited about.

“I just kind of saw a void in the county for craft brewing,” he said, noting as a fan of craft beers, “there weren’t a whole of places serving it” in the area.

Wanting to help revitalize the area

Originally from Mississippi, Baker and his family moved to Charlotte in 2005. For much of the past decade, he’s been working at a few breweries in the western part of the state.

He most recently spent five years at Boojum Brewery in Waynesville, where he started as a second shift brewer but gradually gained enough experience to become production manager.

“I’m really familiar with the Asheville market,” he said. “I just kind of honed my craft in the western North Carolina area. It seemed like it’s a pretty good area to do it in.”

For the last 10 years, his family has owned a house on Lake Tillery. He enjoys the area but noted that too often there simply was “not a lot to do when we were out there.”

Wanting to capitalize on his vast brewing experience and create a space that would attract people to the area, Baker decided to bet on himself and start his own business. He left Boojum in February of last year.

“I’ve always been wanting to open my own brewery,” he said. “I really wanted to hone my craft a little bit and I think running a larger brewery kind of helped me to do that.”

After looking at several buildings downtown, he decided on the two-story building behind City Hall on North Third Street, which used to be the old Fire Station 3, largely because of its spaciousness (9,500 square feet), close proximity to Pfeiffer’s Center for Health Sciences facility and the fact that it had high ceilings, an aesthetic he had been looking for.

He decided upon the name as a nod to the area’s natural resources.

“It kind of goes with the vibe of the city, with the whole outdoorsy direction they wanted to go in,” he said. 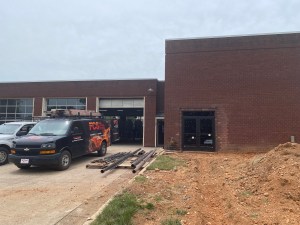 Uwharrie Brewing will be housed in the 9,500-square-foot space that used to be a former Albemarle fire station.

Albemarle City Council last summer approved a performance incentive agreement where it agreed to transfer over the property deed of the firehouse to Uwharrie Brewing in exchange for the business planning to invest $1.1 million over 10 years and create more than a dozen full-time positions.

At the time of the agreement, annual sales were projected at $575,000 in the first year, with an increase to $1.6 million by the fifth year. The economic impact of Uwharrie Brewing over 10 years was projected to be more than $7.2 million.

“I really felt the need (for a brewery) in the county and the city especially and it would be nice to draw more people to the downtown area,” he said.

What people can expect

Although Uwharrie Brewing is still a few months from opening, Baker plans to have 12 beers on tap at any time, including IPAs, lagers and a variety of light and dark beers and ciders. He also plans to have root beer and wines from local vineyards.

“You have to judge your market and brew what the people want and I think the people are definitely going to want all kinds of different stuff,” he said.

Having the creativity to come up with his own concepts is something that has always interested Baker and is a big reason why he left Boojum, where he managed the day-to-day operations of the business and often got away from the brewery side of things.

“I like to engineer recipes and I like to develop different styles of beer and see how other people have done it and try to build upon that,” he said. “It’s really rewarding to me to do something and have it come out the way you anticipated.”

While he will initially focus solely on brewing, he wants to eventually open a kitchen and event space on the second floor. He also wants to bring food trucks to the location once it opens.

The interest in the new business has clearly been palpable. People in the community regularly visit the space, inquiring about how it’s going and when it will open. He’s also began to cultivate a following on both the brewery’s Instagram and Facebook accounts.

“Most people I mention to that I’m starting a brewery, they say Albemarle really needs a brewery,” he said. “Everybody has been super excited and I’m really excited as well.”

Several Albemarle firefighters have come to the facility, including Chief Pierre Brewton, to see what Baker has done with the space.

“They always love coming in and are pretty happy to see the facility being used now,” he said.

He’s also talked about partnership opportunities with places like The Brew Room and Badin Brews, also in downtown Albemarle, and Baker would like to sell his products wholesale to local restaurants and grocery stores.

Baker envisions Uwharrie Brewing as a casual hangout spot people can visit after work to relax with friends.

“It will hopefully be a place where everyone wants to come and feel welcome,” he said. “We just want to have a sense of community here.”