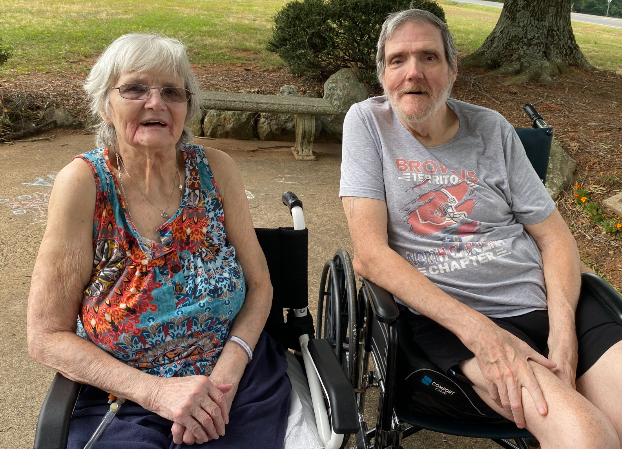 Nancy Peyton and Robert Collins tied the knot last weekend after months of spending time together.

After months of getting to know each other, Robert Collins, 73, and Nancy Peyton, 82, had a wedding ceremony in front of their friends and family at Bethany Woods Nursing and Rehabilitation Center last Saturday afternoon.

“A lot of people go into nursing homes and…they don’t want to have anything to do with anybody because they’re wondering how did I end up here,” said Lorrie Hatley, the wedding officiant and friend of Nancy’s daughter Theresa. “They just quit living.”

But Robert and Nancy “are the exception to the rule,” she said.

“They came in here and they’ve sort of busted it wide open,” she said. “They’re thriving and both of them are in much better shape now that they’re here. … And they’re not ready to quit living yet.”

Originally from Cleveland, Ohio, Robert moved to Stanly County about 25 years ago to be closer to his sister Sandy. After suffering from a few falls, he moved to Bethany Woods about eight months ago.

As fate would have it, Robert was placed in Room 410, which was directly across the hall from Room 411, where Nancy, an Albemarle native who had come to the facility a few months earlier, was residing.

An outgoing individual, Robert liked to interact with as many residents at Bethany Woods as possible, often stopping by their rooms to give them fruit as a pretense to talk and get to know them.

“I’m always somebody that’s easygoing and no matter how many people are around me, I usually tried to gag with them or make them giggle or talk with them,” he said.

He recalls getting apples and oranges from his sister and regularly rolling them across the hall into Nancy’s room to get her attention.

“I thought it was really sweet,” she said about the gesture.

Sandy Collins remembers that her brother was going through the fruit “pretty quickly” during this period, a sign that he was clearly interested in Nancy.

Coming Together As A Couple

While interactions were still somewhat limited due to the COVID-19 pandemic, Robert and Nancy still found time to hang out, whether outside on the patio area or in communal spaces. They even snuck into each other’s rooms at times to watch nature shows and the television series “Bar Rescue.”

“It seemed like when we got together, I had always known him,” Nancy said. “It just fit.”

Nancy, who was more shy and reserved, said she was drawn to Robert’s friendly and sociable personality, noting that he has never met a stranger.

In addition to watching television together, the two bonded over shared experiences, including the fact they were both previously married and had multiple back operations.

“The more I got to know him, the more I loved him,” she said.

One of the key moments in their relationship came on Valentine’s Day, when Robert and Nancy were nominated to serve as King and Queen of their respective hallway. During a get-together at the dining hall, when the residents were all dressed up, Sandy was introduced to Nancy for the first time. She recalled how close the two were at the time.

“Bob was in his wheelchair and Nancy was in hers and so every time Bob moved away, Nancy would grab his chair and pull it over towards her,” Sandy said.

It was during that moment, Nancy said, that the two really began to “mesh together.” 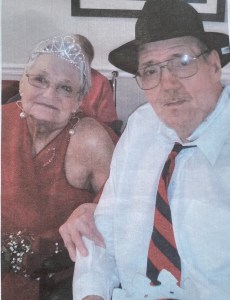 Nancy and Robert were voted as Valentine’s Day Queen and King of their respective hallway. Photo courtesy of Lorrie Hatley.

Sandy recalls Nancy telling her at one point that both she and Robert and gotten to know each other to such a degree that they actually can complete each other thoughts.

“I thought that was really sweet when she told that to me,” Sandy said.

Looking back, Robert believes it was meant to happen that he went to live at Bethany Woods, in order to meet Nancy.

“If it wasn’t for me falling over my walker, I would probably never have been here,” he said.

Nancy, who has multiple sclerosis, felt the same way.

About a month ago, Robert and Nancy made the decision to take their relationship to the next level and get married. They initially wanted to have the ceremony in May, but it got pushed back to June.

There was some historical precedent for Nancy in terms of getting married in such an unusual fashion. Her father, John Eagle, was a resident at Spring Arbor assisted living center when, at the age of 93, he married another resident.

Nancy’s daughter Theresa had always been opposed to her mother getting married again, but she was quickly on board when told about their plans.

“I called her up and I said, ‘What would you say if I told you I was gonna get married again?’ She said, ‘Are you going to marry Robert? I like him!’ ”

Looking for someone to officiate the wedding, Theresa reached out to her good friend Hatley, who agreed and quickly received her certification online. In addition to officiating, Hatley also played a key role in organizing the wedding and the get-together afterwards. 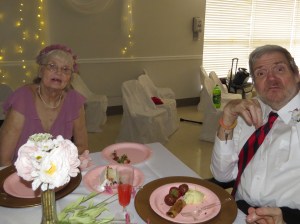 Several staff members at the facility also played key roles during the wedding, which took place Saturday afternoon inside the dining hall. Activities director Juanita Murchison, for example, provided decorations and performed Christina Perri’s “A Thousand Years,” while Harry Brown, Bethany Wood’s resident cook, prepared a cake for the dress rehearsal along with several dishes, including meatballs, chicken wings and potato salad for the main event.

Robert, who spent Friday night with his sister, almost missed the start of his own wedding after arriving to the facility late and then struggling in the parking lot to put on the proper attire.

“I had said to the guests who were already there, ‘He must have gotten cold feet’ and someone said, ‘No, it’s too hot outside for that, he’ll be here,’ ” Hatley said.

While she was initially worried that some people might make light of the wedding and not treat it with proper respect, Sandy came away impressed, saying it was a “beautiful ceremony.” The actual wedding involved only family and friends though the after party was open to all the residents and staff.

Upon Robert’s request, the first song played after the ceremony was Queen’s “Another One Bites the Dust.”

“The wedding was really beautiful and it was very meaningful for those residents,” Murchison said, noting it was “just so good to see two happy people joined in marriage.” Having worked at Bethany Woods for about 30 years, she said it’s rare for two residents to get married; she estimates the last time it happened was about 15 years ago.

Murchison said the residents enjoyed it, noting it “was a really great activity for them.”

Though they were already sharing a room, once married, Robert and Nancy moved their beds together. To christen their first night as husband and wife, Hatley put twinkle lights in the room and rose petals on the bed. A sign was also placed on their door which read: “Just married. Privacy please.”

Over the past year since they’ve been together, both Robert and Nancy have a new lease on life and are excited about the future. They said the relationship has also re-energized them and made them feel younger.

“You don’t quit living just because you’ve gone to a nursing home or reached a certain age,” Nancy said.

Hatley at the wedding read a short poem expressing the love the two share, punctuated by the final stanza.

“We hope we’ve inspired you to follow your dreams/Just like we have today./Don’t forget we’re not dead yet/We can still ‘Have it our way!’ ”