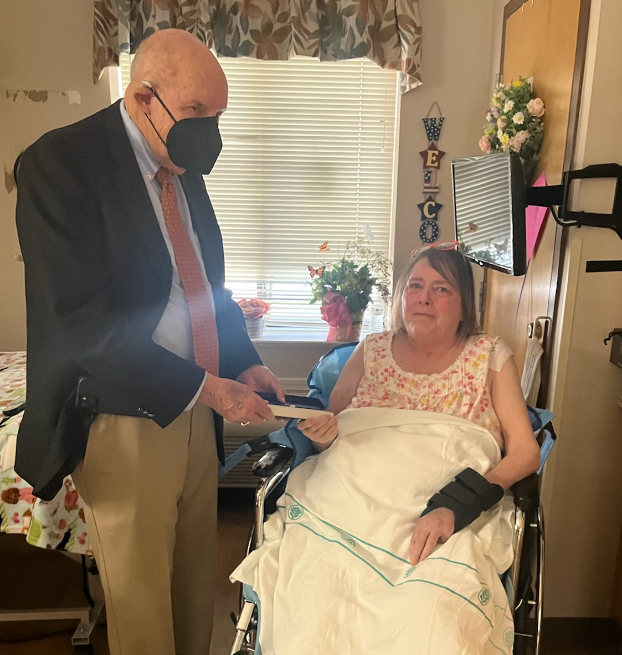 Chris Bramlett, owner of Starnes Bramlett in downtown Albemarle, and store manager Dolores Talbert helped to brighten the day for one woman residing in Stanly Manor this week, when they presented her with a sterling silver charm bracelet as part of a giveaway contest organized by Rembrandt Charms.

Unaware she was going to be receiving the bracelet, Bramlett said Anita Lee was especially touched and teared up after she found out about the gift.

“It is a clear indication of what jewelry can mean to people in good times and bad times,” he said. “It can celebrate the good times and help work through the bad times.”

The special moment would never have occurred if Lee’s older sister, Dianne Floyd of Seven Lakes, had not written to Rembrandt in May about the many hurdles her sister, who lived in Mount Gilead, had gone through and why she deserved some happiness in the form of jewelry, which she loves.

First diagnosed with Covid in September, Lee, 58, spent three months on life support and also lost her husband to the virus, Floyd said. She eventually moved to Stanly Manor at the end of last year and is struggling with symptoms associated with Long Covid.

Though doctors told her Lee would likely not make it, Floyd never gave up hope.

In her letter to Rembrandt regarding the contest, which was shared with the SNAP, Floyd talks about her sister’s many health struggles and how she has been by her side the whole time, trying to cheer her up.

“I call her at least once a day to remind her she is not forgotten and to offer encouragement and praise with even the slightest improvement,” Floyd wrote. “I remind her that she is strong and determined and to have patience.” 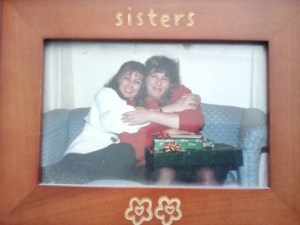 Dianne with her sister Anita. Photo courtesy of Dianne Floyd.

Once Rembrandt selected Floyd as one of its contest winners and understood the bracelet would be sent to Lee, who is her only sibling, the company contacted Starnes Bramlett, which sells Rembrandt jewelry, to see if the bracelet could be delivered to the store.

“This is a fabulous opportunity for your store to make a new customer and create charm buzz,” Audre Johnston, account manager with Rembrandt, wrote to the company in early June.

As a cancer survivor, Floyd, who is also a retired critical care nurse, has not been able to visit her sister, and so once she learned that Starnes Bramlett would be receiving the bracelet, she called them and asked if they would deliver it to Lee.

On Tuesday, Bramlett and Talbert surprised Lee with the bracelet, which is adorned with two charms, one that was engraved with: “I am Anita. I am strong,” and the other that reads: “A piece of my heart lives in heaven.”

“She knew her sister had written a letter, but she had no idea she’d won,” Talbert said.

Upon receiving the bracelet, Bramlett noted Lee “cried like a baby,” which he said was a very touching moment.

Floyd said her sister appreciated the gift and the interaction with Bramlett and Talbert.

“She’s very proud and she loves the bracelet,” Floyd said. 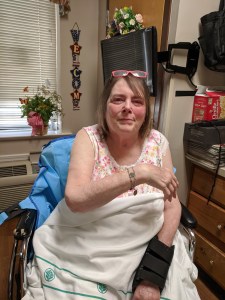 While her sister still has a long road ahead, she’s mainly bedridden and is slowly learning to walk again, Floyd hopes the bracelet — and the fact she recently had a new grandchild — will help keep her spirits up.

“I don’t want her to think she’s been forgotten,” Floyd said.