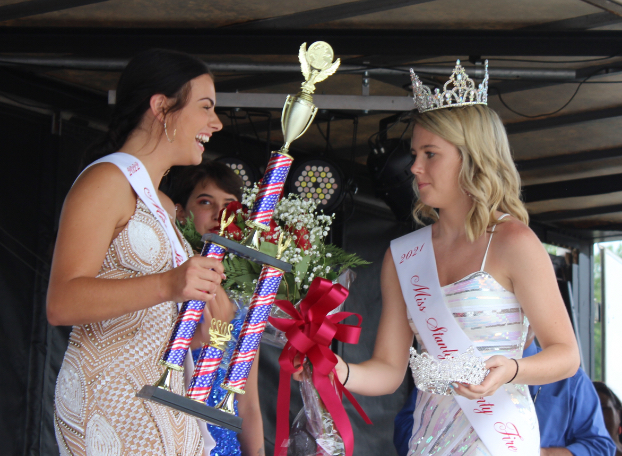 Not used to being on stage, Helms said she was not expecting to win, which made the moment all the more special.

“I really didn’t believe it,” she said when emcee Wes Tucker called her name. “I heard the (name of the) fire department and I wasn’t sure that I was hearing it right.”

Helms, who graduated from West Stanly High School, will attend UNC Charlotte this fall, where she will major in civil engineering.

She took over from 2021 Miss Stanly County Fire Queen Addison Eury, who said the past year helping to represent the county has been “amazing.”

While she admitted it was sad to give up the crown, Eury is looking forward to competing as a Miss Stanly County contestant in October. 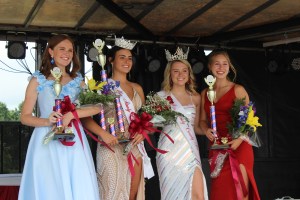 The pageant — and the Oakboro parade — began as a fundraiser by the Oakboro Fire Department as a way of purchasing new equipment, Tucker told the crowd.

There were eight contestants this year and each one was chosen by their local fire department to represent it in the pageant, which consisted of three parts: a fitness wear portion, an evening wear portion and each contestant being asked one random question.

Helms was asked how she defined the word success.

“My definition of success is not always winning or being the best of something, but overcoming the obstacles in front of you and doing better,” she said.

“It was such a special honor,” Simpson said about her peers selecting her for the award. “I’ve gotten to know all of these sweet, amazing girls … and it’s been a pleasure to now call them friends.”

Simpson will graduate next year from Wingate University with a degree in public relations before applying to be part of the Disney College Program to fulfill her dream of working for Disney. She would eventually like to become a wedding and events planner.