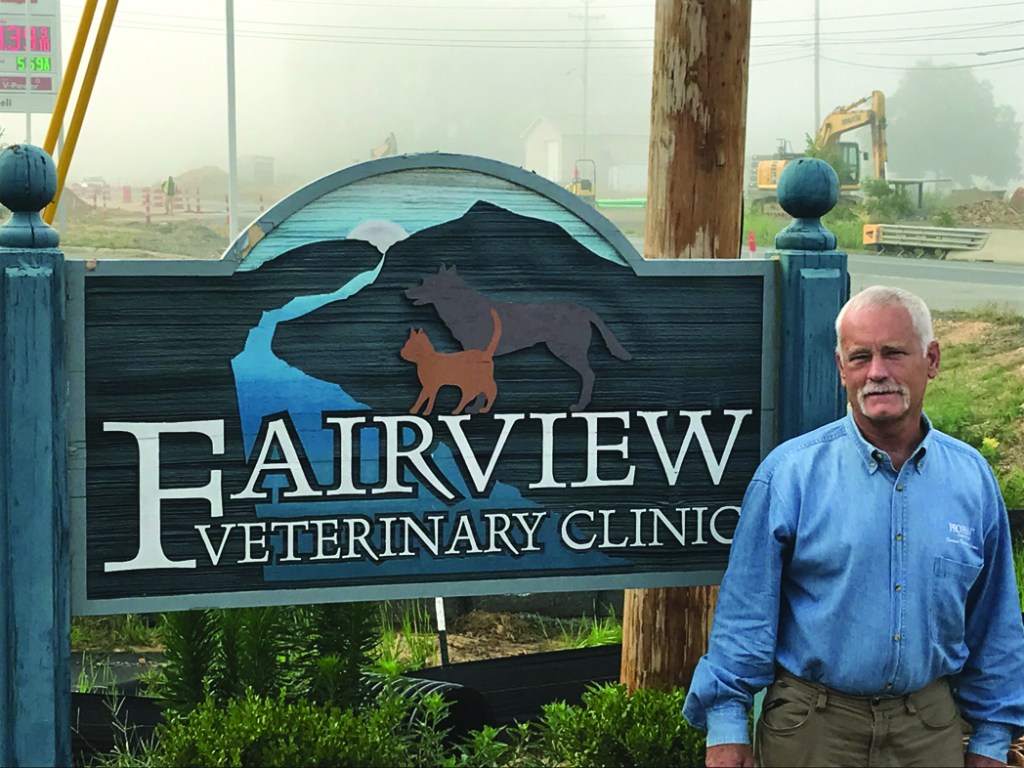 Dr. Alan Howard retired last week after 42 years of caring for pets in Stanly County and the surrounding area. (Photo by TOBY THORPE)

After nearly 42 years of service to pet owners in and around Stanly County, Dr. Alan Howard retired on July 1.

“Lots of reflection, and lots of changes,” is how the long-time veterinarian summed up his feelings on his next-to-last day at Fairview Veterinary Clinic, which he founded in 1984.

Howard first came to Albemarle in 1981, following undergraduate work at the University of Georgia and veterinary school at Auburn.

“I started working at Albemarle Animal Clinic with Dr. (Eugene) Morton, after spending nine months at an emergency veterinary clinic in Charlotte,” said Howard, who spent three years at that location before opening the current clinic on Troy Road.

Although not a Stanly native, Howard had close ties to the county. His grandparents, Clifford and Bertie Howard, lived in the Finger community, and his father, Doyle, moved back to the county in 1972.

A 1973 graduate of Garinger High in Charlotte, Howard recalled that it was while growing up in Charlotte that he made the choice of his life’s work.

“I decided I wanted to become a vet after bottle-raising a litter of puppies when I was in the fourth grade,” he said. “They (school administrators) actually let me walk home from school at lunch, feed the puppies, and walk back,” he said. “Could you see that being allowed now?”

As in most areas of life, technology has led to vast changes in the veterinary field, Howard said.

“The changes that technology has brought about are wonderful,” he said, citing lab work and radiology as two prime examples.

“We can draw blood from a pet here at 5 p.m. and have the test results back — from a lab in Memphis, Tennessee no less — by 6 a.m. the next day,” Howard said. “And digital radiology makes it possible for us to send images to board-certified technicians for analysis.”

But, he noted, some changes in the field are not as beneficial.

“The business end of veterinary medicine has changed, and in some ways it’s not for the best,” observed Howard, noting that big corporations have begun creating veterinary “chains.”

“In the past, the veterinarian was both a doctor and a business owner, but now privately-owned clinics are going the way of the dinosaur,” he said.

As for the future business model at Fairview, it will be somewhat of a hybrid arrangement, according to Howard.

“Dr. Tim Jordan will be the new owner,” he said. “It will be part of a small collective group of veterinary clinics, about six total.”

Through such collaboration within a small group, the clinic will have the capability of offering more specialized services than a solo practice, but will have the same personal relationships with clients and their pets.

“Dr. Anika Farina, who is presently relocating from Colorado, will be here full-time, with other vets rotating in.”

Reflecting on his years in practice, Howard noted that his patients have consisted almost exclusively of domestic pets.

“I worked with cattle and farm animals early in my career,” he said, “and I never worked with exotic pets.”

“But once, I did spay a domestic rabbit,” he added.

“You would not believe some of the foreign objects that pets ingest at times,” he said, recounting that “earbuds, cellphone charging cords and such” occasionally find their way into their digestive tracts.

How about the number of pets he has seen?

“I couldn’t even give you an estimate,” he said.

And, as he prepares to pass the baton to his successor, Howard is quick to say that he’s a believer in Stanly County.

“This is an absolutely wonderful place to live,” he said. “The opportunities here are endless, and I’d encourage anyone, regardless of their career or field, to make Stanly County home.”