Stanly’s Evolution of Work exhibit, in partnership with Smithsonian Institution, set to open in early August 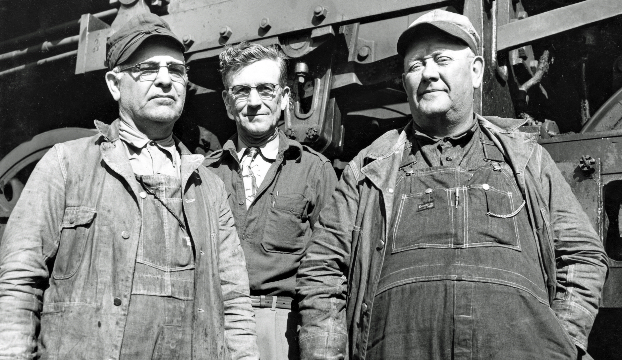 Unidentified rail workers in the county circa 1960. Photo courtesy of Megan Sullivan.

Did you know that fried chicken played a key role in the founding of Stanfield in the beginning of the 20th century?

Or that when Badin was first formed in the early 1900s, it was a large construction site in an undeveloped community and so whenever Mr. Cox, the local doctor, made house calls, he was known to carry his “just in case” gun?

How about that Winifred “Wink” Jonas, a graduate of the Pfeiffer Class of 1944, was part of the team who programmed ENIAC (Electronic Numerical Integrator and Computer), considered the world’s first general-use electric computer?

Those are just a few of the tidbits of information people will learn about when Stanly County Museum’s exhibit, centered around the evolution of work in the county over the past 150 years, opens next month.

The exhibit, which the museum has been creating in partnership with the Smithsonian Institution, the world’s largest museum, as part of its Museum on Main Street program, will have its grand opening Aug. 6. Half of Second Street will be shut down for much of the day, with a ribbon cutting taking place. The museum will also host a “big truck day,” Museum Director Megan Sullivan said, featuring a variety of vehicles such as a fire truck and one from the National Guard for the public to enjoy.

Although the museum is utilizing a detailed Smithsonian-created outline for the exhibit, which includes graphic-designed panels and a selection of optional images and quotes, the bulk of the content will be localized. Sullivan estimates the exhibit will be about 80 percent Stanly-specific, with the other 20 percent from a national perspective.

The exhibit, which will date back to the county’s formation in the 1840s, will be organized around four key themes: Where we work, how we work, who works and why we work. Sullivan said there will be 150 small-focus panels on display highlighting everything from early 20th century mill life, working in the mines, large employers like Alcoa and historic businesses still in operation like Albemarle Sweet Shop and Starnes Jewelers (now Starnes Bramlett).

Some smaller businesses across the county that will be featured include Crosppies Hair Salon in Oakboro, Busy Bee Barber Shop in South Albemarle, HD Crayton Store in Stanfield and Tucker’s Barber Shop in Locust.

Sullivan estimates she has collected at least 200 photographs that will be included in the exhibit.

“Work is so much more than just physical labor, it’s also the emotional connections you make with people and how you interact with your community,” Sullivan said. 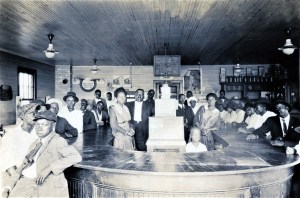 A popular cafe in West Badin circa 1920. Photo courtesy of Megan Sullivan.

Sullivan, who first applied to be part of the Main Street program last year, has been working on the exhibit over the past several months, including meeting with members of the exhibit development committee and events committee, which includes volunteers with the Badin, Locust and Oakboro museums, collecting pictures and images from relevant businesses and individuals, creating the exhibit’s script and coordinating with Selwyn Ramp, MOM’s assistant project director, who serves as Sullivan’s liaison on the project.

“I learned a lot and I definitely have established a lot more community partnerships through this program as well, working with other people,” she said. 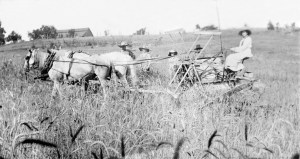 It’s quite a distinction for Stanly County Museum to have been selected to partner with the Smithsonian, as it’s one of only five museums across the country that was been accepted into the MOM program last year and the only one in the state.

Once the exhibit is finished, Sullivan hopes the community can feel a sense of pride about its rich history.

The plan is for the exhibit to be open for at least a year and have events scheduled each Saturday to capitalize on the interest.