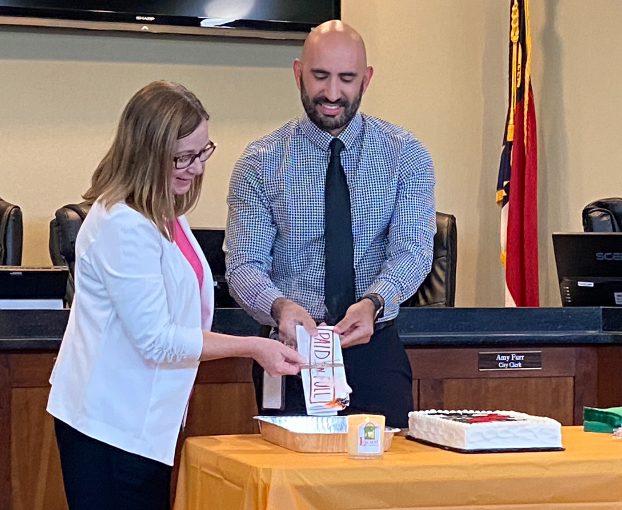 Locust finance director Stephania Morton and town administrator Cesar Correa burn a mock "Paid In Full" document, as a way to celebrate the the city paying off its USDA loan it took out in 2011 for the construction of City Hall.

Locust began its Thursday council meeting with a celebration highlighting a momentous achievement for the city. Locust recently paid off a 40-year USDA loan it took out in 2011 for the construction of the city hall and adjoining library, about three decades earlier than scheduled.

Originally the loan totaled $2.1 million, but the city was able to pay an additional $375,000 towards principal over the last three years, which saved it about $586,000 in interest, Town Administrator Cesar Correa said.

The city paid a total of $1.5 million, the last payment of which was made June 21.

With cake passed out to council members and individuals in attendance, Correa and finance director Stephania Morton ceremoniously burned a mock “Paid In Full” document, symbolizing the completion of the milestone.

“When you see a 40-year loan, for this building and the library, get paid off in 11 years, it’s striking,” Mayor Steve Huber said. “That kind of thing just doesn’t happen. And it is a true testament to all of our city staff.”

“This is proof of our financial responsibility to the citizens of Locust,” Correa said in a later interview. “We are working hard to provide quality services and keep up with new growth, all while keeping a flat tax rate. This puts us in a strong financial position as we get ready to invest in new infrastructure, programs and personnel.”

Introducing a new police officer and promoting another

The good news kept coming throughout the meeting, beginning with Police Chief Jeff Shew introducing the city’s newest patrol officer, Adam Hartsell. As the son of former police chief Frank Hartsell, who retired at the end of 2019, Shew said this likely makes Adam the first second generation officer to serve on the force.

A June 2022 graduate of Stanly Community College’s BLET program, where he received the Damon Smith Memorial Award, given to the top overall candidate of each class, Hartsell has been with LPD for about a month.

“He has shown and demonstrated a tremendous amount of skill in the short time he’s been with us, so we are very excited about having him and we look forward to seeing what his future holds,” Shew said. 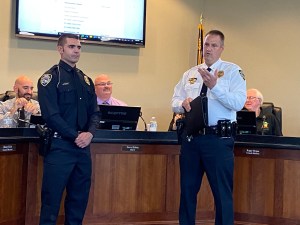 Shew also promoted detective Brittany Tucker, who has been with the department since around 2009, to detective sergeant. She had previously served as a school resource officer at Locust Elementary, was a co-founder of Locust’s annual Shop with a Cop program and has completed more than 1,400 hours of training in her career — the most of any current officer.

“What she’s done in her career here is stellar,” Huber said. “She is in the upper echelon of all officers that have ever worn the uniform and the badge.”

Pivoting to official business, with more young people taking part in athletics within the city, Locust is looking to expand the services it can provide. It issued a Request for Qualifications on Friday, in the search for a consulting firm with experience crafting comprehensive Parks and Recreation master plans.

“This really stems from increased participation in our athletic programs and increased attendance in the programs and activities Emily Jones (parks and recreation director) has to put together,” Correa said, noting there’s been requests for things like pickleball and community gardens.

Once a consultant is recommended and presented before council for approval, which should take place in the fall, the individual will help put together “an objective roadmap” to make sure the city continues to provide the necessary activities for its residents, Correa said. The process, which should take about six months, will include research into what services would be most feasible along with several public forums to gather feedback from residents.

The consultant will eventually present the master plan before council for approval.

In a 4-2 vote, the council approved a conditional rezoning request for Tuscano Homes, which is looking to build a multi-family project consisting of three units on the corner of Meadow Creek Church Road and North Central Avenue. Each unit would be around 1,200 to 1,300 square feet.

Council also unanimously approved a conditional rezoning request for a Dunkin’ Donuts, which will be located next to Taco Bell along N.C. Highway 24-27.

During public comments, Council heard from Johnathan Yeh, owner of Charlotte Saw and Knife, who said the business, which has been around for 92 years and specializes in sharpening and selling industrial cutting tools, is relocating from the Queen City to Locust in the coming weeks.

“I just wanted to say we’re excited to move down here and join your city,” he said.