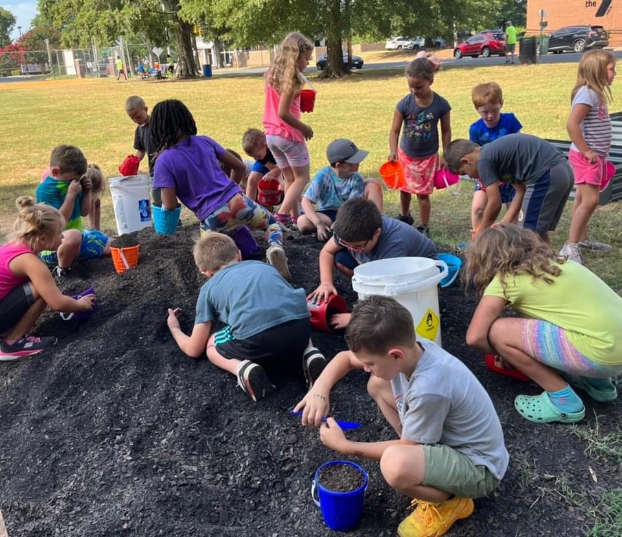 The culmination of months of work was on display Wednesday during a ribbon cutting for the new YMCA Outdoor Adventure Garden, next to the playground at the YMCA Pavilion in Albemarle. It has been a partnership between the organization and the United Way of Stanly County.

Children and volunteers with the YMCA’s summer camp program have spent time each week constructing the 12 raised garden beds and planting crops such as tomatoes, cucumbers, squash, peppers and herbs. Since there are still several more weeks of camp left, not all of the beds have been fully planted. 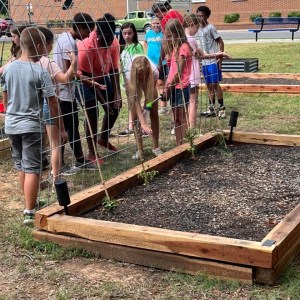 Kids work on the new garden across the street from the YMCA. (Contributed)

“The kids really deserve the credit for creating this space for the community,” said United Way Executive Director Kelly Misiak, who helped come up with the project, noting part of her organization’s mission is to support education by supporting the public school system.

There had been a small garden in the area though the beds were deteriorating. As an avid gardener, Misiak saw an opportunity to partner with the YMCA to help transform the space.

“We just wanted to rebuild the space to provide a really fun public outdoors space that encourages STEM learning and outdoor exploration in collaboration with the YMCA,” Misiak said.

Stanly County Family YMCA CEO George Crooker has been excited about the partnership with United Way, noting how “lucky” the organization was to be able to work with Misiak.

“Children need to learn this kind of (outdoor) stuff and they’re not going to learn it in school,” Crooker said.

The YMCA summer camps average about 90-95 children each week, he said.

“It’s great for the summer when you have time to invest and learn other traits behind just school work,” he said.

Ever since schools let out in early June, Misiak has been working with students, ranging from kindergarten to sixth grade, to construct the new garden.

Though Misiak and other adults have cut the wood and handled the power tools, the children built the majority of the beds and filled them with soil.

“They were fantastic volunteers and so enthusiastic and ready to serve,” Misiak said.

Though the first few weeks were difficult for some of the kids, especially the younger ones, once they got into the rhythm of constructing the garden, “they really started enjoying themselves and getting into it,” Misiak said. 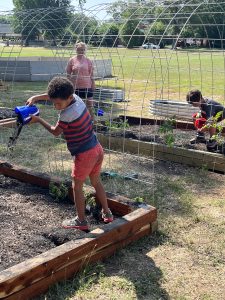 Kids work on the new garden across the street from the YMCA. (Contributed)

As a reward for their work, the children will be able to bring the fruits and vegetables home with them, Misiak said, adding that any extras will likely be donated to the local food pantry.

The project was primarily funded through the United Way Impact grant, which Misiak estimated was about $2,500, though donors also contributed.

Once completed, Misiak hopes the garden will be a space everyone in the area can enjoy. United Way has also assembled STEM learning kits, which students will soon be able to pick up at the YMCA, which will include nature scavenger hunts, learning tools — such as magnifying glasses and plant and animal identification books — along with other activities.

Misiak said contact has been made with school administrators about the possibility of organizing field trips or service learning projects.

“We’re hoping that the garden becomes a resource for teachers to have the opportunity to engage their students in a volunteer project while prodding activities that reinforce what they’re learning in the classroom in an outdoor space,” she said.

Crooker’s main takeaway with the new garden has been the importance of local groups partnering with each other for the greater good.

“You can accomplish so much more when you partner and work together,” he said, noting he would like to see greater collaboration among groups and organizations in the future.

“You don’t have to be the Lone Ranger on stuff like this,” he added.

If anyone is interest in donating supplies, they can visit United Way’s donation page at www.UnitedWayStanly.org/Donate. United Way is also looking for more native plants to fill the beds with. If people have any ideas or would like to share their own plants, they can contact Misiak at kmisiak@unitedwaystanly.org.