Following the Albemarle City Council’s decision in May to remove the stormwater utility fee from the 2022-2023 fiscal year budget, members met Monday night with officials from WK Dickson, a Charlotte-based community infrastructure consulting firm, and Raftelis, another Charlotte-based management consulting firm, to talk about the next steps regarding implementation of a stormwater program.

Taking into account community members’ concerns about the city’s proposed monthly stormwater fee of $11.50, which many believed was too expensive, the consultants presented Council with a revised plan.

The scaled-back cost of service plan presented to Council totaled $1.16 million, considerably less than the more than $2 million original plan, according to a presentation from Tom Murray, stormwater program manager with WK Dickson. Each of the five components, including operation and maintenance of the program and capital improvements, were slashed considerably. The initial program proposed three administration staff and six operations and maintenance staff. The revised proposal would instead include two administration staff and three operations and maintenance staff. 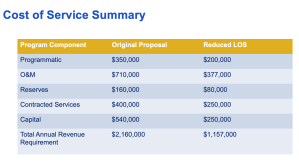 The city would save about a million dollars under the new stormwater plan presented to council Monday night.

Reducing the stormwater plan would also reduce the monthly rate. It would be cut in half, from $11.50 to a five-year average rate of $5.80. Loose leaf collection, which was included as part of the original proposal for the stormwater program, has been taken out and remains part of the solid waste fee.

Even with the reduced monthly rate, Councilman Dexter Townsend had concerns about the financial toll it would have on small businesses and churches with large properties.

“It’s still going to have a huge impact on them,” he said.

But Murray explained that with a reduced stormwater plan, it would take longer for city staff to respond to flooding events and repair aging infrastructure. Under the original $2.16 million plan, it would take an estimated 4-5 years to fully map out each of the city’s water basins and identify what infrastructure (catch basins, pipes, etc.) needs to be improved; with the new plan, the time would be extended to about 7-9 years.

With flooding a recurring problem for residents throughout the city, several council members were concerned 7-9 years would be far too long a time to fully map out the system.

“That’s an extremely long time when you see what issues occur in our city when we have these heavy rain storms,” Councilwoman Martha Hughes said.

There was also disagreement among council members about when to implement the stormwater system. Mayor Pro-Tem Martha Sue Hall wanted to stick to the council’s plan it made during a May budget workshop to create and implement a system by January, while Mayor Ronnie Michael was more comfortable rolling out a new system by next July.

A suggestion that seemed to garner support among much of the council was to appropriate some of the city’s American Rescue Plan funds, as much as $2.5 million, towards planning and implementation of stormwater projects.

The decision to spend money on stormwater would first require the council’s approval of any recommendation made by an ARPA workgroup.

“When people look back 50 years from now and they say, ‘Well what did that city council do with that money?’ — this would be something that I think we would be proud to say: ‘We looked forward, we were proactive, we’re trying to address stormwater in our community and we used some of those funds to address this issue,’ ” Hughes said.

Council did approve a motion allowing city staff to apply for additional funding on the state level. The North Carolina Department of Environmental Quality’s Division of Water Infrastructure is administering about $100 million in federal funds for stormwater projects and municipalities have until Sept. 30 to apply.

More information regarding American Rescue Plan spending and how the funds could best be used would be discussed during the council’s Sept. 6 meeting. Council agreed that another public hearing would also be conducted to garner more feedback from the community.