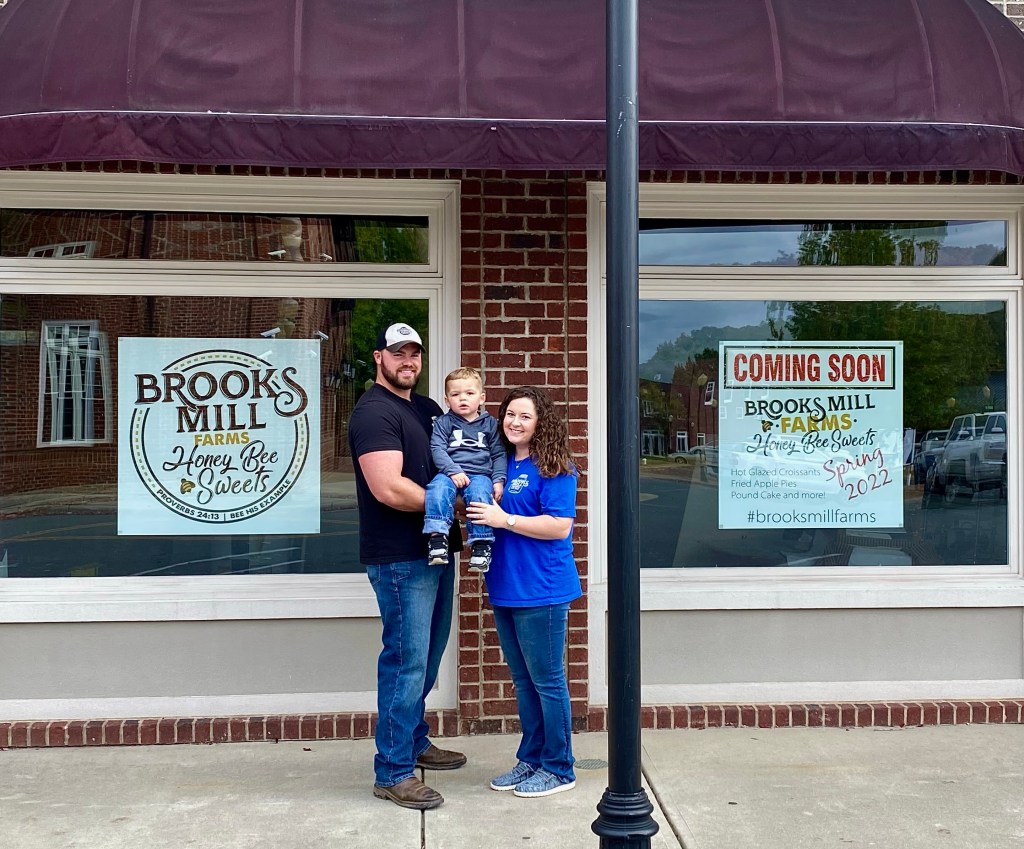 Clint and Kasey, with their son Wyatt, are about to open their new store in Locust. Photo courtesy of Kasey Brooks.

After about two years in operation, Kasey and Clint Brooks, owners of Brooks Mill Farms, closed their Midland store a few months ago. They now are ready to open a new location in Locust Town Center. The grand opening is 8 a.m. July 30.

While many farms in the area produce crops such as cotton or grain, the Brooks’ main focus centers around beekeeping. As such, their new store will feature raw honey, beeswax hand cream, hand soaps and lotions. The couple will also feature staples from their Honey Bee Sweets bakery such as croissants and cinnamon rolls and items such as sunglasses and leather products from Charlotte-based retail store Johnny Fly. Several of their products are also sold at Nona Louise in Locust and Rocky River Vineyards in Midland.

The couple, who live in the Ridgecrest area, decided to make the move to Locust to capitalize on a growing market.

“We knew that the location (in Midland), despite there being a lot of traffic in the area, it’s not really in a retail setting,” Clint said. “We started looking for places that would have the opportunity for more of a town center feel. Although we lose the ambiance of the old general store building, we feel like we can carry that old school feel into our new location.”

The Locust store, inside Suite 114 at 150 Ray Kennedy Dr. next to Sogo Express, will have the same “rustic feel” that customers came to associate with the previous location, Clint said.

As a way of honoring the past, Clint and Kasey have refurbished wood from the original family farm and used it as new counter space.

“We’re excited to be bringing actual farm pieces to what our new business is going to be,” Kasey said. 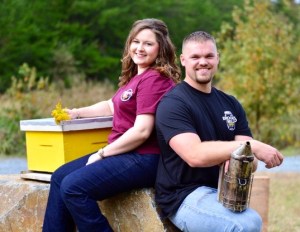 Kasey and Clint Brooks are excited to open their new store in Locust. Photo courtesy of Kasey Brooks.

Clint grew up on a traditional livestock farm off N.C. Highway 24-27 in the easternmost part of Charlotte before his family moved to Stanly County in 2007. While attending Stanly Community College more than a decade ago, he met Kasey and first learned about beekeeping. He took a course with the Stanly County Beekeepers Association and began talking to local beekeepers.

“Ninety-eight percent of my knowledge and experience with beekeeping came from the school of hard knocks and trial and error,” Clint said.

Clint manages around 200 colonies during the summer months. A single full-size colony can contain 80,000 to 100,000 bees, he said. While Clint sells both nucs (also known as nucleus colonies) and packages of honeybees, much of his focus is around queen bees, which he breeds and sells across the country. He recently sold several to the University of Maryland.

“As much complexity as there is to beekeeping, just the simplicity of being out in the field and enjoying creation really puts your mind at ease and it makes life fun,” he said.

The opening of the Locust store is far from the only thing Clint and Kasey are looking forward to in the coming months. The couple, who have a 2-year-old son Wyatt, are also expecting their second child in August.