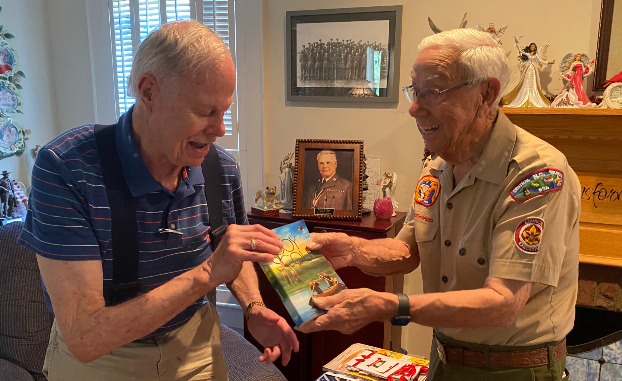 Tom Wainwright was talking with Adrian “Sandy” Van Sinderen recently during a luncheon for congregants of Bethany United Methodist Church when the conversation went in an unexpected direction.

Talking about the Boy Scouts of America, where Wainwright was a former Eagle Scout and had served about 50 years in the organization, including as former scout executive of the Central North Carolina Council, Van Sinderen asked if he knew about James E. West.

For someone as steeped in Boy Scouts history and lore, that was the equivalent of asking a presidential scholar if he knew about George Washington. Wainwright held West in high esteem, as he was the BSA’s first chief Scout executive who, along with William D. Boyce, helped found the youth organization. He even has a picture of the man in his office.

It was at that point when Van Sinderen, who is from New York but lives in New London, told Wainright he was West’s grandson.

“I was shocked and blown away,” Wainright recalls, noting he told everybody he knew about it. He even called his former Scouts in Savannah, Georgia.

Van Sinderen, 79, notes that while he does not have vivid memories of his grandfather, who died when Van Sinderen was 5, he spent at least four years in the Boy Scouts, which he said impacted him greatly and helped influence the man he’s become.

Though he believes he would have joined the Boy Scouts even if he wasn’t related to West, he said his mother Helen, West’s daughter, and his grandmother Marion encouraged him to become part of the youth organization his grandfather helped create more than 100 years ago.

Van Sinderen said his experience with the Boy Scouts taught him the importance of helping others, especially those less fortunate, which is something that has stayed with him.

“We did that religiously, helping people who couldn’t help themselves,” he said. “That to me was very important.”

His dedication to public service extended to his professional career as an educator, where for 50 years he taught everything from kindergarten to college. From 1995 until 2019, he was an instructor at Montgomery Community College, where he taught English literature, writing and speech.

“He was great and his presence is felt all the time, even today now,” Van Sinderen said about his grandfather.

He has a framed picture of West in the main room of his home, with two small plaques denoting his role as both co-founder and first scout executive. 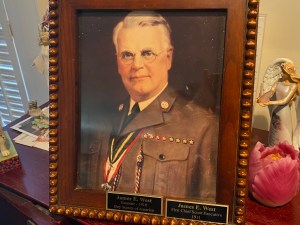 Van Sinderen said his grandfather, who is still the longest-serving chief executive, was also friends with notable early 20th century luminaries including President Franklin Roosevelt and Robert Baden-Powell, a British Army officer who was the founder of the global Scout Movement.

“I think it’s fantastic and very marvelous that he actually helped to bring Scouting to America,” Van Sinderen said.

Much of West’s influence with the organization, which he led from 1911 to 1943, is still felt today.

Shortly after becoming the director of the organization, West helped create the first edition of the Boy Scouts Handbook. He was integral in expanding the third part of the oath: “To help other people at all times; to keep myself physically strong, mentally awake and morally straight.”

He also pushed to add the final three parts to the Scout Law: brave, clean and reverent.

The James E. West Fellowship Award was established in 1993 as a national recognition for gifts of $1,000 and up to a council endowment fund.

In recognition of Van Sinderen’s connection to Boy Scouts, Wainwright came to his house last month to present him with the current edition of the Boy Scouts Handbook.