YMCA seeks to feed a great need in Stanly County 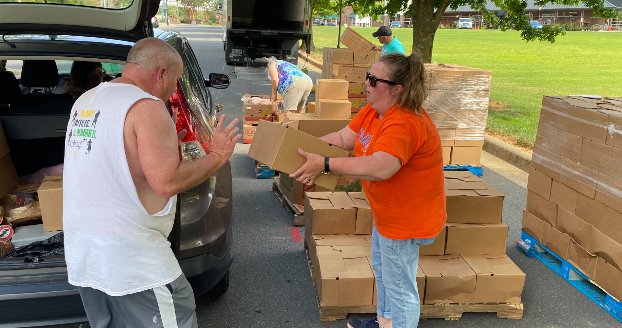 A woman was in tears as she drove to the monthly mobile food pantry site in Locust Town Center, set up by the Stanly County Family YMCA in April. She had recently lost her job and her rent had increased by $200.

Trying to just figure out out to survive, “she was so grateful to have just two simple boxes of food,” recalled YMCA Membership and Marketing Director Kelley Bigger, who, with the help of several volunteers, organizes the service, in partnership with Second Harvest Food Bank of Metrolina, which provides the food.

“They just pull in, pop their trunk open, we load them, close the trunk and they leave,” Bigger said. 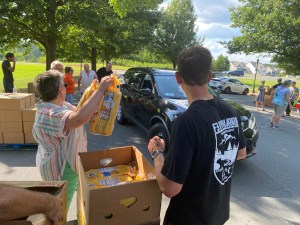 Kelley Bigger grabs bread to deliver to one of the cars in line.

“It means a lot the way things are now,” said Garry Austin, who received his boxes of food July 28.

This was his second time coming to the food pantry.

“It’s just hard knowing it’s costing more and more when you go to the grocery store.”

Austin is among the many who have come to rely on the food offered by YMCA volunteers and staff for sustenance amid rising costs and the ongoing coronavirus pandemic.

While the mobile pantry is still in its infancy, the number of people assisted has been rising. The YMCA served 116 households in April. In June, 262 families took advantage of the opportunity, Bigger said. The numbers dipped in July, when 235 households were served.

“As word of mouth has spread and more people have become aware of what we’re doing out here, we’ve definitely seen an increase in the volume of traffic,” said volunteer Kristie Marks, who has  distributed food since April.

The staff and volunteers, usually ranging from around 10 to 15, work until either they run out of food or have no more cars to load up.

Anyone is eligible to receive the boxes as long as they answer a few basic questions, including how many households they’re picking up for and how many people in each household are over 65 and under 18.

“I raised my kids that you don’t know everybody’s story, so don’t question it,” said volunteer Chris Matson. Even if someone drives up in a nice-looking car, “they may have a need just as much as anyone else.” 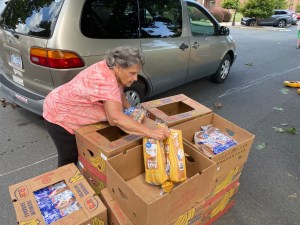 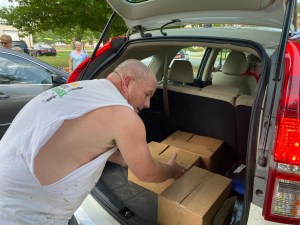 George Crooker places a box of food inside one of the many cars that stopped by the mobile food pantry location Thursday evening.

A second pantry opened in Albemarle in the parking lot of Stanly County Commons last month, where 250 families received assistance. Food is distributed there during the second Thursday of each month, also from 4:30 p.m.-6 p.m.

“What we look to do and what we try to do is we go to fill gaps,” YMCA CEO George Crooker said. “There is a huge gap in this community for people who cannot afford to eat.”

As of 2020, about 13 percent of Stanly County’s population — or close to 8,000 residents — were deemed to be food insecure, according to nonprofit organization Feeding America, which is defined by the United States Department of Agriculture as the “lack of access, at times, to enough food for an active, healthy life.”

About 15 percent of Stanly residents are living in poverty, according to new Census data, slightly higher than the 13 percent of North Carolinians across the state.

As successful as the mobile pantry has been within the community — Crooker estimates as many as 500 families will eventually be helped monthly between the two locations, the YMCA is thinking bigger. The organization is planning to start several other food programs in the coming months to make sure as many individuals as possible have reliable access to food.

“We’re just scratching the surface of this,” he said.

Other food programs that will soon start

In addition to the initiatives that have been in place for years, such as the Backpack Program for pre-K children, which served close to 70 weekly backpacks of food last year, and providing Sunday lunches to people each at the Community Table, the YMCA is looking to provide dinners to children under 18 who attend Title 1 schools and take part in the YMCA’s after-school programs next school year. The YMCA, which would prepare the meals, would then be reimbursed for the dinner meals as part of the federal Child and Adult Care Food Program (CACFP) program.

“There’s a few YMCAs in the state that do this program and it impacts and changes those communities,” said Michael Peeler, senior program director, who will be in charge of the initiative. He and other employees have been learning about similar food programs from other local YMCAs, including ones in Burlington and Goldsboro.

Crooker said the new program should feed at least 120 children, but as someone who wants to maximize his organization’s reach, he’s hoping for a much larger count.

They would like to start the program right as school begins in late August/early September.

The YMCA does not want to stop with just feeding young people. Another program it hopes to roll out at the beginning of next year is providing free boxes of shelf-stable food to senior citizens each month who meet certain eligibility requirements, in another partnership with Second Harvest.

Looking to initially pilot the program for older adults at the West Stanly Senior Center before later broadening it out across the county, Bigger said it will help fill a void in the community.

“They have the Meals On Wheels and the Nutrition Sites, which are fabulous, but there’s nobody else in the county that’s offering this program to our seniors,” she said. “And we just want to help with that.”

Crooker said all of these initiatives have been the brainchild of Bigger, who has worked at the YMCA since 1994.

“It’s just the most basic human things Jesus asked us to do,” she said. “It’s in the Bible — feed the hungry. So I feel like we have that responsibility to do that.”

While the YMCA hopes to regularly provide meals to thousands of people who otherwise might not consistently get fed, Crooker said he also wants more people to recognize that the organization is “so much more than pools and a gymnasium.”

“We can’t end hunger in Stanly County, but we’re going to do our darnedest to put a nice little dent in it,” Crooker said. “We’re going to give it a shot.”