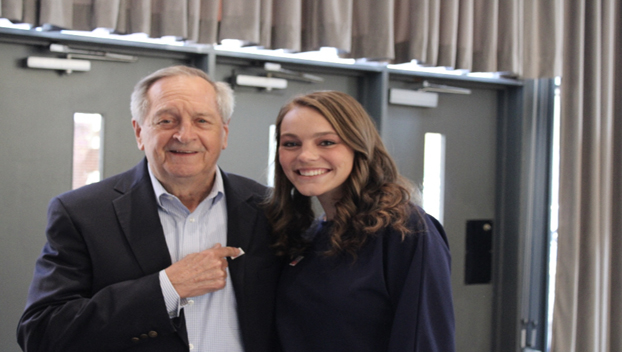 By Larry Penkava, for the SNAP

Merionne Hunt may be a rarity among recent college graduates — she knows what she wants to do for a living.

Merionne, the daughter of David and Julie Hunt, earned her degree from Catawba College in May. By then she had a good feel for what she wanted to do with the rest of her life.

It wasn’t the curriculum she took that persuaded her or her three years as a walk-on with the tennis team. In fact, extracurricular activities made all the difference, not to mention some special mentors who helped her along the way.

“I wouldn’t be where I am without all those contacts,” Hunt said from Chapel Hill, where she is Development Intern Member Services at the UNC Rams Club.

Those contacts go all the way back to her grandmother, Linda Hunt, who taught history at North Stanly. One of her students was Jeff Childress, who eventually became the associate director of athletics for development as well as director of the Catawba Chiefs Club. 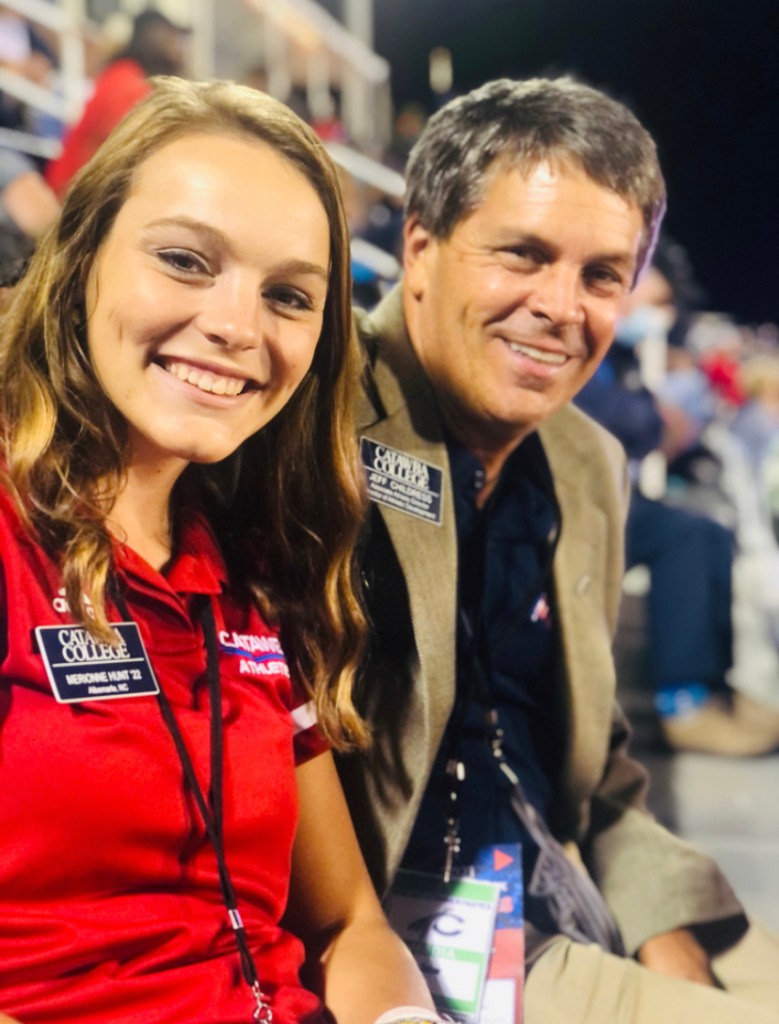 “At Catawba he reached out to ask me if I’d work with athletics,” said Hunt.

That was in her freshman year and she did mailings before eventually working up to special events, gameday operations and home game setups.

Hunt had declared biology as her major, but she eventually changed it to exercise science with a concentration in sports medicine. But her work with athletics management sent her in a different direction.

With her three years experience with Catawba athletics, Hunt was able to secure an internship with the Wake Forest Deacon Club during her senior year. Working at the Division I Power 5 level, she said, “was a stepping stone. I stayed all year and went to the Gator Bowl (with the Wake Forest football team).”

Working with people, Hunt says, has been the highlight of her time at Catawba, Wake Forest and now UNC.

“Working special events at Catawba, I got to meet so many people and make friends,” she said. “It’s not just to raise money. Even now, it’s a lot of fun to get back together with them.”

Hunt even has a network of acquaintances at other schools at events such as the annual Pigskin Preview involving several North Carolina college teams.

“Making friends is fun,” she said.

As fate would have it, Cooke is a Rams Club member who Hunt has met. In fact, when she accepted the internship at UNC, she was looking for a place to live. She learned that Cooke has a home in Chapel Hill that he uses when he’s in town. He agreed to rent her the house while she’s with the Rams Club.

Hunt learned of the Rams Club job opening while visiting with staff members during a basketball game at the Smith Center. She was in Varsity Hall with her mother and some friends from Salisbury. Varsity Hall is one of the hospitality rooms for men’s basketball games.

Those friends introduced Hunt to Emily Stevens, who is a major gifts director for the Rams Club, and Stevens provided the information on the internship. Hunt decided to apply for what she called a “dream job.”

She had to wait several weeks before hearing on April 27 that she had been accepted for the internship. She began work May 23.

Working at the Ernie Williamson Athletic Center near the Smith Center, Hunt is on the front line for donors, taking phone calls and answering questions.

She answered the phone one day and heard a familiar voice. It was Damon Rhodes, her principal at Kendall Valley Elementary School. Rhodes remembered her since one of his sons went to school with her.

Being involved with UNC athletics, Hunt said she’s often asked if she can get people tickets to the Duke game. She teasingly will tell them that there are usually plenty of seats for field hockey.

At the Rams Club she’s met former athletes who are involved with donors. They include Brian Chacos, who played football, and Brian Bersticker, a former basketball player. But the best-known is Eric Montross, the center on the 1993 national championship basketball team. 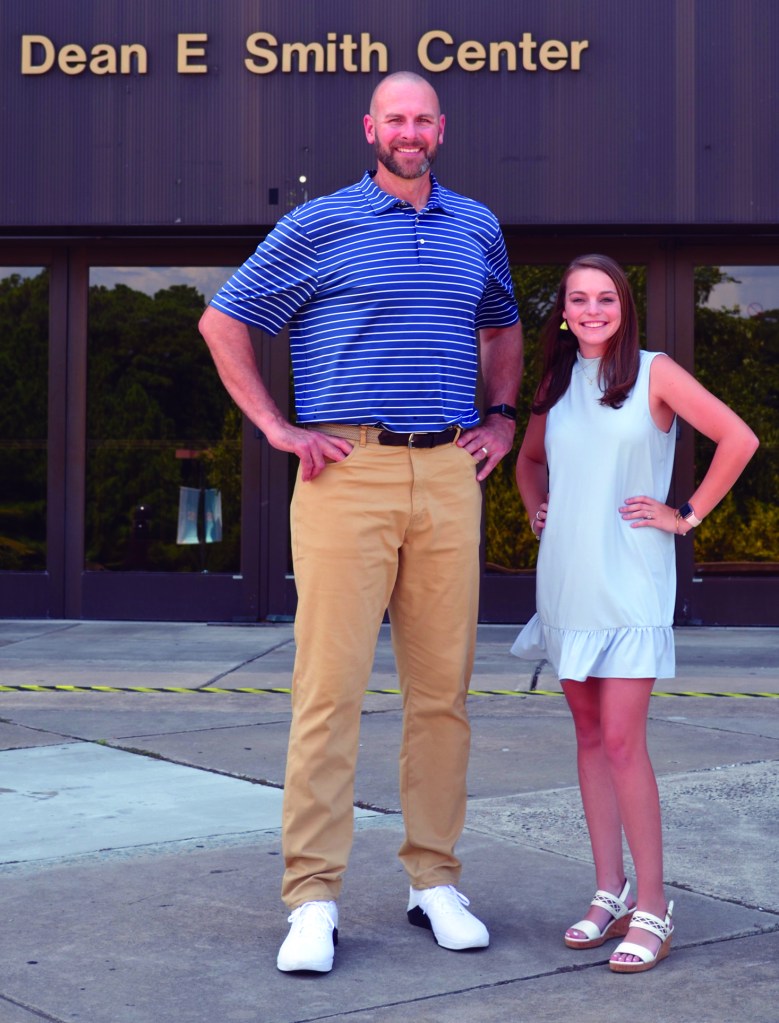 Merionne Hunt poses with Eric Montross in front of the Smith Center. (Contributed)

“They’re not in the office much, but they’re great to work with and easy to talk to,” said Hunt. “Eric Montross is one of the most humbled people you’ll ever meet and he’s very good at what he does.”

The Rams Club is the primary fundraiser for UNC athletics, collecting donations for athletic scholarships and facility upgrades. For the women athletes, the Rams Club has started Forever Tar Heels, in which former players return to raise money but also to mentor current female players.

“Being a former student athlete, it makes me happy to see that,” Hunt said.

With football season only about a month away, the Rams Club will be ramping up special events soon.

“We’ll be getting ready for Rams Club ticket holders,” she said.

That includes the Tar Heel Patio at the Morehead-Patterson Bell Tower, which provides food under a big tent for Rams Club members at home football games. Then there’s the Tar Heel Experience for donors sitting in the stands. 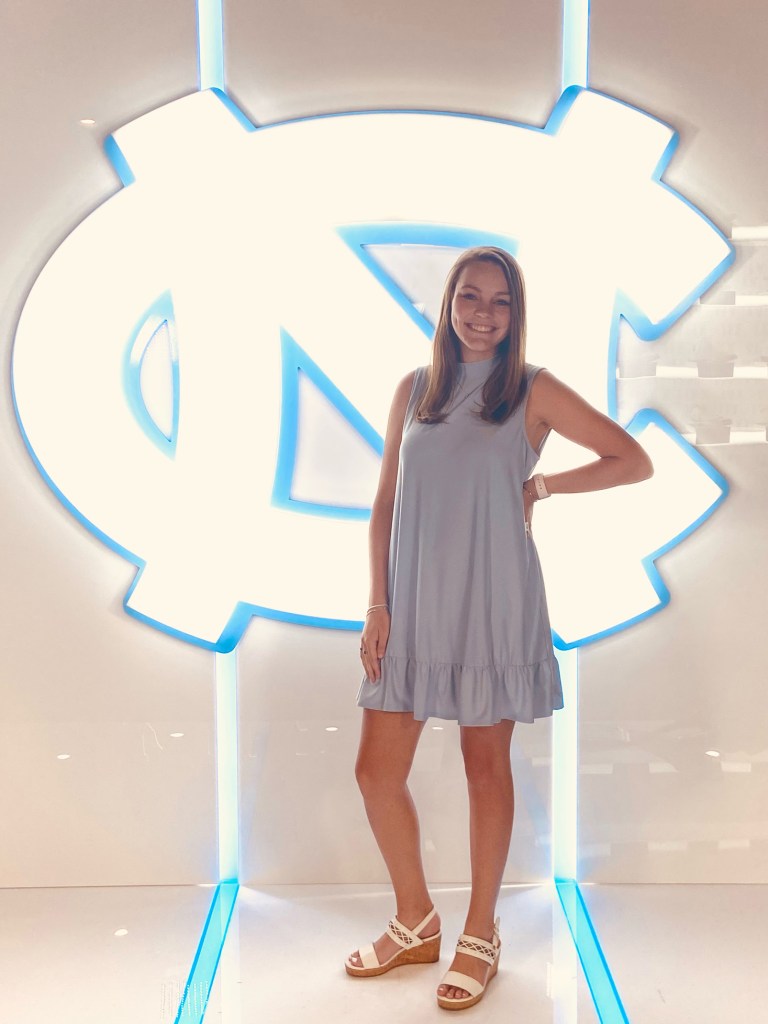 Merionne Hunt in the Jordan Experience Room at the Kenan Football Center. (Contributed)

Hunt’s internship will last through next May, but she’s hoping it will turn into a full-time job.

“These are great people to work with and there are a lot of different things I want to continue, like working with donors,” she said.

“At Carolina, they care about the future of interns,” she added. “They take time to talk about your options. They’re really good mentors.”

Hunt has also had a hand at mentoring. She helped with orientation of new students, mostly non-athletes.

“It was special to meet them and be able to help them out,” she said. “Later, I’d like to go back to Division II as an athletic director.”

She credits Larry Leckonby, who worked at several schools before coming to Catawba, “who did a really good job. I was lucky to work with him.

“I like the small community feel, maybe (ending up) at my alma mater.”

No matter what her future holds, Hunt understands that her field is “all about connections, hard work and projects others wouldn’t take on.”