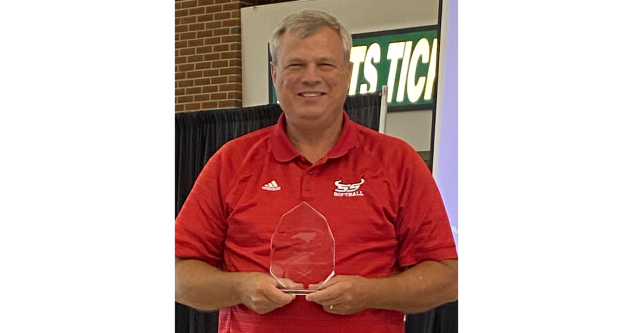 At a recent ceremony, he was named the 2022 North Carolina Softball Coaches Association 1A Coach of the Year and he was inducted into the organization’s Hall of Fame.

Poplin also led the Bulls to the 2012 1A state title. His overall coaching record at South is 329-118, with a 73.8 win percentage. His teams have won at least a share of a conference title in nine seasons, and the Bulls have won three Western Regional titles, including the two state championship seasons and 2021.

Having great players and coaches, Poplin said, is what led to being named the 1A Coach of the Year, along with the team’s success in winning the state title. South also went undefeated in conference play and won the Yadkin Valley Conference regular-season and tournament titles while finishing 30-3 overall, the first 30-win softball season in the school’s history.

Winning a third state championship puts South Stanly among the elite in the state. Only 13 schools have won three or more fast-pitch state titles.

Poplin said the 2022 softball season was special and there “probably will never be another one like it.”

Earning the Hall of Fame honors, however, was unexpected, according to Poplin.

“It’s one of those things you think that may come along when you’re done with the game and retired,” Poplin said. “It was very surreal.”

Emily played on Poplin’s 2012 state title team and was an assistant coach this past season, which Poplin said has allowed her to “share her story from that ride with the girls on this ride.”

The moment came at a meeting of approximately 100 fellow softball coaches, which the South coach said was “a nice moment to be appreciated by your colleagues.”

As far as his future with South softball, Poplin said the recent success drives him to keep coaching. He has taught for 33 years. He said retirement was more of a year-to-year decision.

Poplin said “as long as there’s a purpose” and his assistant coaches, his daughter and Matt Little “are there by my side, and we feel like we’re contributing to South Stanly, we’ll keep doing it.”

The South coach said he and his staff will keep coaching softball “the South Stanly way,” which he said was scouting and outworking other teams while respecting their opposition.

Poplin added the South way was to “respect (other teams in) the way you get off the bus, the way you carry yourself, in the way you practice…we do things the right way with respect, and treat our opponents with respect. The bottom line is respect and accountability.”