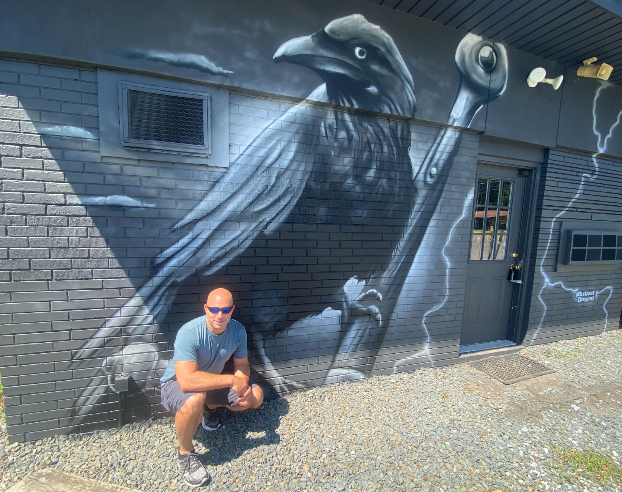 Co-owner Jon Pokorny in from of the mural of the raven.

It takes only a second to realize that the new business moving into the 5,000 square-foot space that used to house Outfitters Steaks and Seafood in Locust is going to be a unique place as a huge spray-painted image of a vicious Viking with a battle-axe greets visitors along the side of the building at 805 W. Main St.

People should not be intimated — though they hopefully will be hungry and thirsty. That’s because the business, Buzzed Viking Brewing Company, will feature food with a variety of beers and mead, an ancient alcoholic beverage made from fermenting honey mixed with water.

Having launched its first location in Concord in the summer of 2020, Buzzed Viking is planning to open the Locust location sometime in late September or early October. This will be the city’s second brewery, after The Brew Room, which opened in May. 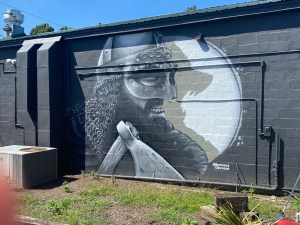 An image of a Viking gearing for battle will greet people once Buzzed Viking opens later this year.

Having searched various communities, including Mooresville and Monroe, to set up its second location, owners Jon Pokorny and Mike Moroe decided upon Locust.

“We wanted to have something a little bit more local in a small town that was still developing,” Pokorny said, adding that once he and Moroe came to Locust and talked with residents, “we realized, you know what, this will be a great spot.”

Buzzed Viking was the first combination of a brewery and meadery ever established in Cabarrus County and one of the few in the country, according to its website.

The name, while interesting, has nothing to do with overindulgence, Pokorny said.

“I want people to bring their kids and their families,” Pokorny said about the environment he would like to cultivate.

Part of the name comes from the fact that with mead being the oldest form of alcohol on the planet, it was something Vikings drank. And mead is made from honey, which is made by buzzing bees. An alternate explanation for the name, Pokorny said, is centered around Moroe’s wife Sheri, who comes from a Norwegian family that traces its ancestry back to the Vikings. Her grandfather was a beekeeper and whenever he got stung, he’d say the bees “buzzed” him.

Compared with the Concord location, which offers basic bar food, Locust will feature an expansive, colorful menu, about 90 percent of which has been finalized. Some of the offerings people can expect include honey chicken and waffles, a wagyu, elk and boar burger served with chili pepper bacon jam, a sandwich named The Lonnie Little (Pokorny gave no additional details), giant Turkey legs and a honey-basted pork schnitzel with sweet potato gnocchi. More traditional bar fare include pretzels, honey-battered chicken skins and Locust hot fries.

“Basically we saw that you have Tailgators Sports Grill and you have fast food and you have the Local Room, well we’re landing right in the middle,” Pokorny said, noting the dishes won’t cost more than around $15.

The Locust location will feature about 20 beers brewed on site along with about four to six mead wines, which are quite different from traditional wine and tend to contain more alcohol. The alcohol content of Buzzed Vikings’ meads is 12 percent.

Buzzed Viking in Concord rotates through about 70 flavors of mead wine, including blackberry, blueberry, apple, piña colada, mango and cheesecake. Pokorny said customers in Locust can expect a similar diversity of offerings.

Aside from the food and drinks, Buzzed Viking in Locust will be an entertainment venue. It will offer activities such as music bingo, face painting, a game called brew bag (a combination of corn hole and beer pong), live music, comedy shows and more.

“We’re gonna test a lot of things and see what’s popular with our customers,” he said.