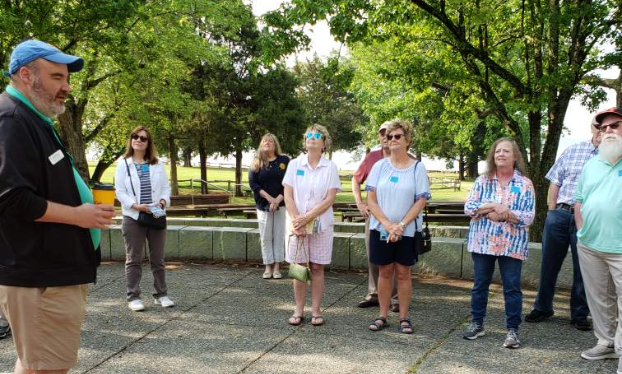 Several individuals with ancestral ties to Historic Jamestown traveled to the cultural site to learn more about the history behind the country's first permanent English settlement. Photo courtesy of Debbie Noah.

Lois Harwood Marlow had been to Historic Jamestowne in Virginia several times over the years and while she always appreciated its historical importance — first formed in 1607, it was the first permanent English settlement in the Americas — it never personally resonated with her.

That eventually changed once Marlow discovered that, like many residents and natives of Stanly County, she had a direct connection to the settlement, thanks to ancestor Cicely Baley, who arrived in Jamestown from England in 1610 at age 10.

Marlow and several others who grew up in Stanly County recently came to learn of their connection to Cicely, thanks to the work of New London resident Debbie Noah, who spent years connecting her lineage to Cicely — who is her 11th great-grandmother. Since discovering her roots, Noah has been helping others with similar ancestry get connected to Cicely. Most of the people from Stanly are connected via the Harwood/Harward line.

As someone who is part of several historical societies, including the Colonial Dames of America and the local chapter of the Daughters of the American Revolution, Marlow, who lives in Concord but grew up in Albemarle, knew her lineage dated back several generations, but did not know it extended more than 150 years before the founding of the country.

Noah, Marlow and several others related to Cicely have all recently become members of the Jamestowne Society, an organization where individuals have to prove they are a direct descendant of a qualifying ancestor who lived or held colonial government positions in Jamestown prior to 1700 in order to get accepted. There are currently 17 local members with at least five more getting ready to send in their applications. The Uwharrie Jamestown Society meets the second Thursday of each month at the Stanly County History Center.

Visiting and learning about Jamestown

To better understand their distant past, nine local members of the Jamestowne Society and several guests embarked on a three-day trip to Richmond and Jamestown to learn more about the original settlement.

The group first went to the Virginia Department of Historic Resources in Richmond, where more than 60,000 artifacts from Jordan’s Journey, a plantation where Cicely spent much of her life, are stored after they’d been excavated between more than 30 years ago. The chief curator allowed the group access to a secure area where artifacts are cataloged and stored, Noah said.

They saw a variety of ancient artifacts including 96 ceramic vessels, tools, pieces of pottery, jewelry, armor breastplates, chainmail and hilts. Among the interesting items was a ceramic roof tile dating back to the 1620s and the skeleton of a 14-year-old young boy who had an arrowhead lodged in the back of one of his knees, indicating he had most likely been the victim of an Indian attack. 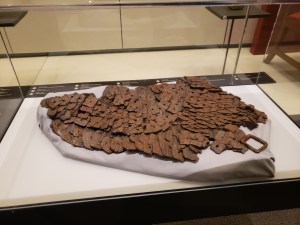 Body armor worn by an early settler who lived at Jordan’s Journey, a plantation on the James River. Photo courtesy of Debbie Noah. 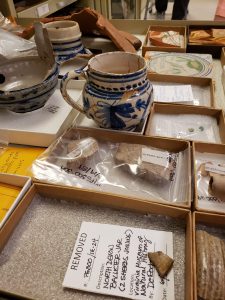 The group then visited Malvern Hill Farm, currently owned by Henrico County, which was named for a house that used to be on the property built by Richard and Temperance Cocke, Cicely’s daughter, for their son Thomas. It is the only documented place in the United States to see troop activity during three major wars: the Revolutionary War, the War of 1812 and the Civil War. All that’s left of the house, which was consumed by a fire in 1905, is the cellar and partial brick chimney.

The farm was one of the “most peaceful, beautiful places I have ever seen,” Noah said.

The group then toured Historic Jamestowne, the original site of the 1607 first permanent English settlement. With the aid of an archaeologist and the executive director of the Jamestowne Society, the group explored the Archaearium and the site’s archaeology museum. At Jamestown Settlement, a museum of 17th-century Virginia adjacent to Historic Jamestowne, they boarded re-creations of three ships that carried the first settlers from England to Virginia in 1607, including Susan Constant and Godspeed.

Smaller in size than he thought they’d be (the original Susan Constant, for example, was about 116 feet from tip to stern), David Almond said he had no idea how people, like Cicely, “had enough nerve” to make the months-long journey to the New World amid very cramped conditions.

“I can only imagine to be willing to take a risk like that, you’re life must have been terribly miserable where you were,” Almond estimated about why people decided to make the trip. 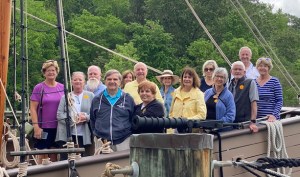 The group tours a re-creation of the ship, the Godspeed, at Jamestown Settlement museum. Photo courtesy of Debbie Noah.

They also were told about the site’s uncertain future due to flooding. Historic Jamestown, located along the cost of Virginia, is one of the 11 most endangered sites in the country as a result of global warming, Noah recalled being told.

The roughly five-hour journey was a powerful experience for many of the individuals, several of whom talked to the SNAP about what the trip and Cicely meant to them.

“For me, it was very, very emotional,” Marlow said about revisiting Jamestown, “because this time I felt connected. To know that Cicely and all of these people were here and I’ve got their DNA.”

Being able to actually walk on the same ground as her ancestors was something Marlow will never forget.

“Here was where they lived and they slept and they ate and they raised children,” she said. “It was really powerful. I’m getting tingles just thinking about it.”

To help make sure her family never forgets where they came from, Marlow recently helped her 4-year-old grandson Miles Marlow become a member of the Jamestowne Society. Miles already knows much of the background behind Cicely — who is his 12th great-grandmother — including the year she arrived in Virginia and the ship she came in on, the Swan.

“I think with this, it will help him with whatever path he takes in life,” she said, noting Miles has also been attending local Jamestowne Society meetings.

David Deese, who lives near Aquadale, was also moved by the experience and his connection with Cicely.

“I cannot believe any of my relatives were here that early,” Deese said. “The thing is, there’s so many more people I share DNA with — Harwood DNA — in Stanly County who have no clue they’re connected to such a historical individual in Cicely.”

Even though the group did not necessarily discover any additional biographical information about Cicely from the trip, it did help to deepen their understanding of what life must have been like for the settlers and how resilient they had to be in order to survive.

“I keep telling people the odds of us even being here are remarkable in itself,” Noah said, noting her ancestor is included in the book “Women of Colonial America: 13 Stories Of Courage And Survival In The New World.” “All the things Cicely went through that others did not survive. She’s a remarkable person.”

Impressed with their common ancestor

Cicely was a woman ahead of her time in many respects, which several of her ancestors have said they’ve taken pride in. Though nothing is known of her life and background before she arrived in America, many people interviewed for this story noted how brave and resilient she was to make the trip to Virginia, amid the backdrop of ongoing battles between settlers and Native Americans and a period of food insecurity known as the Starving Time during the winter of 1609-1610.

“We don’t know what happened on the voyage over, but here she is coming to a New World where there’s a war going on and she might be killed at any time and she’s hearing these horror stories of starvation and possibly cannibalism,” said Deese. “The fact that she persevered over the years and became an icon is amazing.”

After arriving in Jamestown in 1610, Cicely established herself as one of the few female ancient planters about a decade later, according to research from Noah. The term applied to early colonists who migrated to the colony of Virginia when it was managed by the Virginia Company of London. They each received a grant of 100 acres of land as their dividend for investing in the Virginia Company, provided they stayed for at least three years.

She was married many times, beginning with a man named Baley, who fathered her first of many children, a girl named Temperance Baley, who is also a common ancestor to Noah and the others. Once her first husband died, she eventually remarried Samuel Jordan and they lived at Jordan’s Journey, a 450-acre plantation on the James River.

Cecily and her family survived a surprise Native American attack in 1622, which killed about a third of the colonists in Virginia, though everyone at Jordan’s Journey survived.

Following Jordan’s death in 1623, Rev. Greville Pooley became interested in Cicely and even claimed to have proposed marriage to her and claimed she accepted. Cicely preferred William Farrar, a man who moved to Jordan’s Journey following the attack, and wanted to marry him. Pooley then sued Cicely for breach of promise, the first such case in America. After two years of litigation, the case was resolved in Cecily’s favor in 1625. Cecily and Farrar eventually married and had several children together.

During her marriage to Farrar, Cicely was documented as being head of the household at Jordan’s Journey along with her husband in the Jamestown Muster of 1624-25 — a level of success that was extremely rare for women in those days. She died sometime after 1632, though Noah has not found an exact date.

Linwood Harwood, who’s from Stanly but now lives in South Carolina, was especially impressed that Cicely appeared undaunted in pushing the boundaries of what was acceptable of a woman in those days, including deciding who she wanted to marry.

“All the other ladies of the period are really, really demure and retiring-type individuals and here this woman is and she steps up and speaks her piece,” he said.