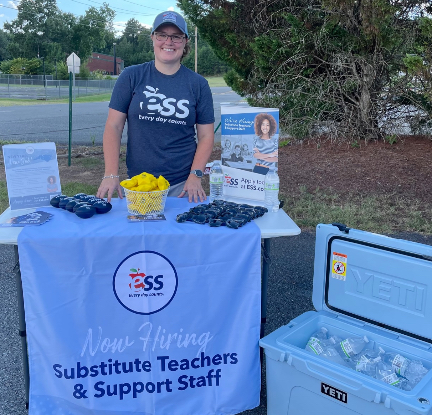 Rachel Turner has been working to hire as many subs as possible since she began her role as account manager with ESS in March. Photo courtesy of Rachel Turner.

Trying to find ways to entice substitute teachers last year to take on certain assignments, Rachel Turner had to get creative.

For certain subs who may have been concerned about a long commute or working in a school that had a reputation for being difficult, Turner provided an extra $25, at no cost to the school system, to give them some extra motivation. For others not sure about working on Fridays, $25 gas gift cards seemed to do the trick.

She also was in regular contact with new subs, answering any questions they might have and worked to alleviate any fears or anxiety.

Her efforts appear to have made a difference, since ESS, a national organization that places qualified staff in daily, long-term and permanent K-12 school district positions, filled 73 long-term vacancies or absences for 18 schools last year, according to data Turner presented to school board members during a work session last week. Anything over 10 days is considered to be a long-term absence.

Since March, when Turner, a former teacher assistant at Central Elementary, began her tenure as ESS’s account manager/recruiter in the area, she has been working to make sure Stanly County Schools has enough subs to fill the gaps that arise throughout the year. Originally from Wisconsin, Turner has lived in Stanly since 2016.

One of the first things she did was organize in tandem with Brittany McIlwaine, ESS regional manager, a substitute appreciation event at Oakboro District Park in late March, complete with door prizes and raffle tickets, to show the subs employed through ESS, who often can go unnoticed, just how much they’re appreciated.

“I’m a firm believer in quality over quantity,” she told the board. “If we do not have people coming in, we need to combat that somehow. And so part of that is appreciation and part of that is the raffles.”

Under her watch, ESS has held three recruiting events each week during the summer and she still looks for ways to encourage and reward her staff, such as providing smoothies to subs working at Albemarle Middle recently. 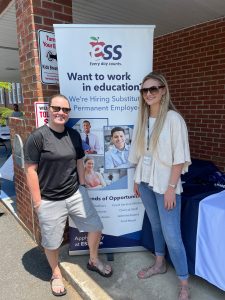 Since the school board first approved of the partnership with ESS in November 2018, the company has managed to fill at least 97 percent of all yearly absences, including vacancies, which often total more than 7,100 each school year. While the fill rate dipped to 78 percent last year — largely a result of the Covid pandemic, with so many people, including subs, having to quarantine — Turner is looking to boost the rate to 85 percent this year.

The school system had 128 subs employed through ESS last year, much lower than in previous years (there were 237 during the 2019-2020 school year). Turner wants to increase the total to at least 180 this year, in line with how many worked during the 2020-2021 year. To encourage more people to apply, subs receive $100 whenever they refer prospective candidates to ESS.

“The best thing about Stanly County is, being a small community, the word-of-mouth is what is the strongest thing,” she said, noting she’s confident ESS can reach its target of 180.

From a financial perspective, Turner presented board members with data showing that it costs less to employ a sub or a teacher assistant through ESS than it would directly through the school system.

Turner said she takes pride in getting to personally know her subs and wants to make sure they feel valued and needed.

“One thing I did with every single new sub, if they went to a school, by the end of the day, they heard from me,” she said.

And if an individual had trepidation about going to a new school, Turner would sometimes contact the principal or some other official beforehand to make sure the sub felt welcome whenever they arrived.

One idea she mentioned that gained traction with board members centered around recognizing a substitute of the month during each school board meeting.

“We want people to know that ESS cares just beyond the business aspect,” she said.

The more subs that enter the classroom and experience what it’s like to teach and connect with students, the easier it is for the school system to use the existing pipeline when looking to hire new teachers or other staff. Over the past year, around 35 subs have been hired by SCS to serve all sorts of roles.

Turner has also volunteered at events at schools throughout the district.

The board members appeared impressed with her presentation.

“We are very lucky,” Board member Anthony Graves told her. “You’re awesome and you can never leave.”