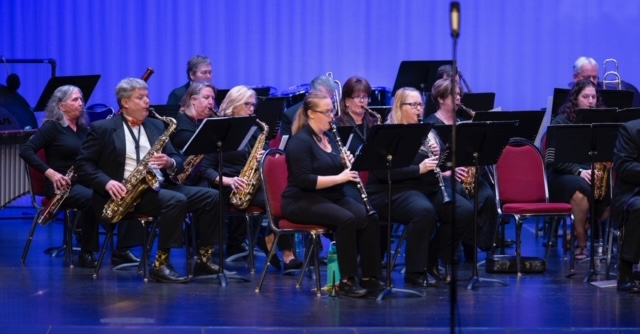 The Stanly County Concert Band is celebrating an important milestone this year.

Founded in 2012, the organization is entering its 10th year of providing musical entertainment to the community.

The organization’s fall concerts will be 7 p.m. Nov. 3 at the Stanly County Agri-Civic Center and 7 p.m. Dec. 8 at Central United Methodist Church. The concerts are free, though financial donations are accepted. The band will perform new pieces along with members’ favorites over the years.

SCCB is under the direction of Tim Hedrick, his wife Carmella and former North Stanly High School band director Frank Poolos, who have each been with the organization since the beginning. They also each play instruments within the group: Tim plays the clarinet, Carmella the flute and Frank the oboe.

While the numbers have dipped somewhat since the onset of Covid, there were 43 members at the last concert compared with more than 50 pre-pandemic, Tim is excited about attracting additional members for a season that will be extra special.

“We’re getting ready to get started and we’ve got some exciting things planned and so we want to get the word out there,” he said, noting that there will be giveaways at the concerts.

Anyone 18 and older who has musical experience in a band, even if they live outside of Stanly, can join the group and there is never any pressure to perform a particular way.

“We’re fortunate that we have good musicians, but we also have those who just love to play and have never got training past high school,” Carmella said. “We ask them to just play what they can and we have enough people that can play the rest. So when the whole thing comes together, it’s great.”

Over the years, the band has grown stronger as its members, many of whom have been involved since the beginning, have helped make each other better. The organization has members of all ages, ranging from seniors in high school to individuals in their 80s.

“Any musical group, the longer you can play together or perform together, the more you start thinking alike,” Carmella said.

Aside from improving musically, members has also enjoyed forming close-knit bonds with each other.

“In all bands, they become a family and our people really do care for and look out for each other,” Tim said, noting many members look forward to practicing together on Thursday nights.