Childress, a man who gets things done 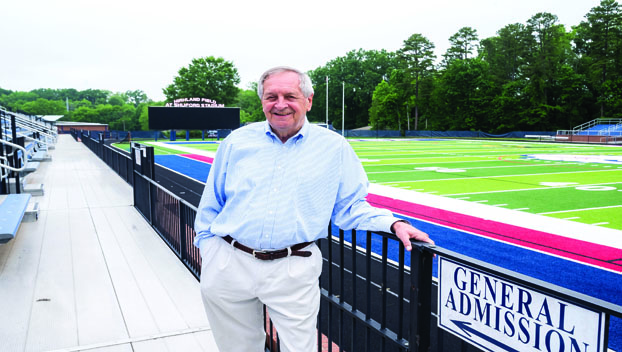 Namely — get Dave Robbins elected to the North Carolina Sports Hall of Fame.

Robbins played for Moir at Catawba and was Childress’ teammate in the 1960s.

Robbins’ college coaching career was nothing short of incredible (three national championships, 713 wins), but he’d accomplished his feats in Division II, away from the bright lights and ESPN cameras. Plus, he’d accumulated all of those victories out of state at Virginia Union University, and he’d hung up his whistle in 2008. Those national titles had happened at the HBCU school back in 1980, 1992 and 2005.

Out of sight, out of mind

N.C. Hall of Fame committee voters had forgotten Robbins, a native of Gaston County, or they had chosen to ignore him. But Moir wouldn’t let Robbins be overlooked. Neither would Childress.

In January 2022 the long overdue call to the Hall of Fame came for the 79-year-old Robbins. Childress won a long, quiet, behind-the-scenes fight to get it done. He also made certain Catawba had a full table for Robbins’ induction ceremonies in April.

Childress is the person that people turned to for a long time when something needed to get done for Catawba. Robbins was just the latest example.

While he was a stellar college basketball coach in his own right, Childress, who celebrated his 80th birthday in June, is neither tall nor intimidating nor threatening.

He’s not a bully. What he does is project an overwhelming vibe of decency and integrity. If Childress asked you to write a check to Catawba (or Pfeiffer) it not only meant that you had the means to write it, it also meant that it must be the right thing to do.

“Just a class act,” Catawba supporter Bob Setzer said. “Tom’s demeanor, the way he always treats people the way they should be treated, he’s an extra-good man. He never high-pressured anyone, but it was really hard to say no to him.”

Basketball was important to boys growing up in Mount Airy, where Moir coached a powerhouse program at the local high school.

In 1960, Childress’ senior year, Mount Airy High’s Granite Bears went 25-0 and won the 3A state championship. That undefeated season led to Moir being hired to bring some of that Mount Airy magic down to Catawba.

Mount Airy was so good in 1960 that Childress and state championship Mike Cooke became the first high school teammates to play together in the East-West All-Star Game in Greensboro.
Moir wasn’t able to recruit Cooke. Cooke picked North Carolina and had the distinction of playing on Dean Smith’s first bunch of Tar Heels in 1961-62.

But Moir was able to recruit Childress, who made a natural progression at Catawba. He paid some dues as a freshman and sophomore guard for the Indians before shining for Moir as a junior and senior.

As important as anything that happened on the court, Childress met Catawba student Judy Hollar, who was a year younger, She would become Judy Childress and the mother of his four children.

After graduating from Catawba, Childress coached three seasons at East Surry High, not far from his roots.

While he was teaching and coaching high school ball, his dream was getting his foot in the door as a college coach. Opportunity knocked one night when Appalachian State head coach Bob Light came to speak at the East Surry athletic banquet.

Light and Childress hit it off

Childress took a leap of faith, moving to Boone to work for the ASU Mountaineers as an underpaid graduate assistant. He already had one child, and he’s still not sure how they made it. There was a lot of sweat and a lot of prayer, and his foot was in the door.

It worked out. Childress earned a masters degree and was elevated to full-time assistant by Light after that first year.

Childress was 27 in 1969 when he got his chance to be a college head coach. The offer came from a legend — Pfeiffer AD Joe Ferebee. Ferebee had spoken to Moir and Light, and both offered glowing recommendations of Childress.

“Pfeiffer offered me the job, but it wasn’t a routine decision because there was almost nothing there,” Childress said. “Old gym, one bank and one restaurant.”

He took the job. He remembers losing his Pfeiffer debut to Erskine, but he also remembers winning the next two against Carolinas Conference opponents High Point and Presbyterian. He was on his way.

Much of it is a blur now, but there were a lot of wins. Part of Childress’ journey was mentoring a promising assistant coach named John Lentz.

They could and should make a movie about his final game — coaching against Moir in Catawba’s Goodman Gym.

In 1977, Childress’ duties at Pfeiffer expanded to AD. He had coaching adventures in tennis, swimming, golf and cross country, as well as basketball.

He handled the AD chores until 1990. He served in an era when Pfeiffer’s varsity sports programs expanded from nine teams to 14. Softball and field hockey fields were constructed. A tennis complex was built. In 1989, he added the role of dean of admissions to an already full plate.

Childress’ next stop was a return to Catawba where he continued to wear multiple hats. He had some athletic department responsibilities, but he also served as dean of admissions and became vice president of external relations. That meant marketing Catawba to the world and attracting students.

There was some success. Catawba’s incoming freshmen class jumped from 219 in 1990 to 294 in 1992. Childress’ coaching background helped him build a solid management team, and they went to work.

“We had good people — no way I could have accomplished anything without them,” Childress said. “And those were good days. At a small college, you get to know just about every student’s name — and their major. And at least half of our students were athletes.”

In the summer of 1993, Childress bounced back over to Pfeiffer where he had been offered a position that made him second-in-command at the school. His job title was senior vice president for institutional development. His task was raising funds.

“He was the face of Catawba in the community for a long time,” Setzer said. “He was that guy that connected Catawba, with the alumni, with the community and potential donors. He had a positive relationship with people like the Hurleys, the Stanbacks, the Rendlemans, and that was huge for Catawba. Every person who came in contact with Tom loved him.”

Starting in 1997, Childress and the late Newton Fowler spearheaded the most ambitious fundraising and development campaign that had ever taken place at Catawba — and raised $56.5 million. There were a handful of million-dollar donors, which helped, but volume was critical. At least 4,000 businesses and individuals gave.

Long-needed renovations as well as new construction took place. The sound of jackhammers was ever-present on campus.

In the spring of 2000, Childress was honored with the Trustee Award for his mighty fundraising contributions to Catawba.

“I didn’t raise the $56 million,” Childress said modestly. “We raised it. When you get an award like that, you wish 50 more people could stand up there with you.”

All four of Tom and Judy’s four children competed at the college level, and now 12 grandchildren have made or are making their own impact in the sports world. That includes Michael Childress, a Division I golfer at Richmond, and Bryson Childress, a D-I basketball player at High Point. Bryson played for coach Tubby Smith, who once played for High Point against his grandfather’s Pfeiffer teams.

Childress is grateful for all of it

When he was 50, he had open-heart surgery and his story could have ended on the operating table 30 year ago. Faced with his own mortality, that’s when he first started to consider what his legacy would be. He wanted it to be a life of service.

His good works continue. Even in retirement, his efforts with his church and with Rowan Helping Ministries keep him busy. He makes sure to give something back every day.

When he graduated from Catawba in 1964, Childress didn’t have much in the way of finances, but he still made a small gift to Catawba.

“I knew I owed Catawba a lot and I owed a great deal to Coach Moir for the basketball scholarship that changed my life,“ Childress said.

His relationship with Moir was a close one until Moir’s death.

In 2001, Childress and his wife established an endowed scholarship at Catawba that honors Childress’ late parents. It is earmarked for a student with financial need from Surry County.

When he retired officially from Catawba in 2014, 50 years after he graduated, Childress was the recipient of the O.B. Michael Distinguished Alumnus Award, which goes to the Catawba graduate who has made the most outstanding contribution to the school or society.

Childress is a member of four halls of fame — Surry County, Mount Airy, Catawba and Pfeiffer.

“I had two long careers, first in athletics, and then administration,“ Childress said. “I was fortunate. I never had a day where I felt like I was going in to work. I was just going to a school that I loved.“

Pfeiffer, his workplace while his children were growing up, will always be near and dear to him, but Catawba always will be home.

He poured heart and soul into making Catawba a better school.

“There was a time I saw Tom have a parking-lot conversation with a business owner,“ Setzer said. “They must have talked for 45 minutes. When Tom was done talking, she wrote a check to Catawba right there on the hood of her car. That’s Tom Childress.“

He’s a man who still gets things done. A man who is hard to say no to.