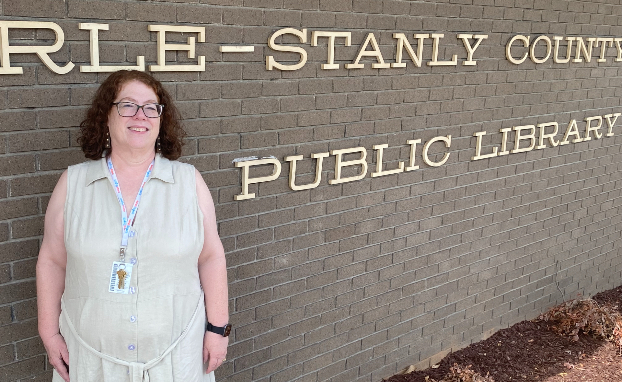 Melanie Holles will become the new director of the Cabarrus County Public Library on Monday.

After more than two decades at the Stanly County Public Library, including the past 13 years as library director, Melanie Holles is leaving her post. Her last day is Friday.

She is taking over as director of the Cabarrus County Public Library. Her first day at the downtown Concord location is Monday.

“I’m excited, I’m looking forward to it,” she said about the new position.

It will be quite the transition for Holles, going from overseeing about 24 employees to more than 70.

County Manager Andy Lucas will serve as interim director. The plan is to have Holles’ replacement in place by mid-September.

Lucas said during her tenure Holles has helped steer the library through numerous obstacles including the Great Recession and the Covid pandemic, all while playing a key role in improving and expanding the branch locations.

“Melanie has assembled a very energetic and creative staff that is focused on meeting the literacy and technology needs of our community,” he said. “We wish Melanie well as she transitions to her new role in Cabarrus County.”

She played a key role in the transition to a new library facility in Locust and numerous interior upgrades to the Albemarle library, as well improvements to the Badin, Norwood and Oakboro facilities.

While she is excited for the new opportunity, Holles will miss the many people she’s come to know over the past 24 years she’s worked in the library.

“It’s meant everything to me. I love this community,” Holles said. “Since I am not originally from this community, to be able to come in and get to know everybody in the community and have the support of so many people…has just been amazing.”

Holles has been connected with libraries for most of her life, dating back to her time as a high school student in South Dakota, when she worked at her local public library.

Upon receiving her degree in Library Science from St. Cloud State University in Minnesota and a master’s degree from Emporia State University in Kansas, Holles became associate director of library services at the Charlotte AHEC library in the mid-1990s before working at a medical library in Tennessee, according to her LinkedIn page.

She came to Albemarle in 1998, where she served as outreach services librarian, supervising the various branches across the county. She was in that role until she became library director in 2009.

Holles has been around for changes such as merging the Stanly County Museum with the library under one department, moving the Locust branch from the Food Lion shopping center to the town center, where it is located next to city hall, and relocating the genealogy and local history collection from the main library in Albemarle to the current location inside the Stanly County History Center on North Second Street.

Whether reading to individuals at the CARE Cafe in Albemarle each month or listening to the sounds of kids dancing and moving directly above her office during storytime, Holles has enjoyed her time with the Stanly County Public Library.

It’s allowed her to meet and form relationships with all kinds of people within the community that she otherwise likely never would have encountered. The library in Albemarle has long been a refuge for the homeless population, for instance. They often come in to cool off, get warm or rest.

“We’ve got homeless folks that come in here every day and you get to know them,” Holles said. “And every once in a while one of them will come in and say, ‘Oh, I’ve got a job’ or ‘I’ve finally got off the waiting list for housing.’ And it’s just makes me so happy to hear people improving their lives.”

Holles, who applied for the open Cabarrus County position last month, said she’s excited to oversee growth within the library system, including the addition of a sixth branch location in Afton Village.

“I think it’s important for organizations to get new blood, so I really am excited for Stanly County Library,” Holles said. Whoever takes her place “is going to come in with some fresh ideas and fresh enthusiasm.”

While her day job will now be in Concord, she will still live in Albemarle. She plans to visit the county libraries, this time as a citizen.

“This will still be my home library,” Holles said.