Pfeiffer University mourns the loss of Falcon Hall of Famer and former Pfeiffer Board of Trustee Member (2008-2012) Dana Rader.

Rader, a trailblazer in women’s golf, became the first Pfeiffer female golfer to make the men’s team in 1978 before Pfeiffer began sponsoring women’s golf. She would work her way up to the No. 2 position on the team in 1980. 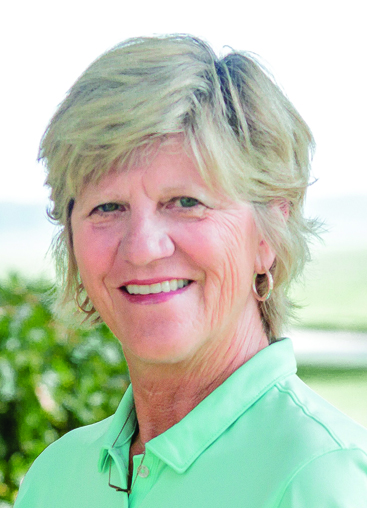 Dana Radar had served as the Director of Instruction at Belfair, a private golf club community in Bluffton, South Carolina, since August 2018. (Photo courtesy of Belfair)

After gaining her Golf Professional status in 1980, Rader started as an Assistant Professional at Myers Park Country Club. In 1987, when she opened the Dana Rader Golf School, one of the most renowned in the golf world, she instructed over 17,000 students of all ages and skill levels, including over 500 juniors—a passion for Rader. It was named a Golf Channel Academy and was the only one with such a prestigious designation in the Carolinas.

In 2017, Rader sold her golf school, known today as the Ballantyne Golf Academy.

She later served as the Director of Instruction at Belfair, a private golf club community in Bluffton, South Carolina, since August 2018.

In 2016, she was inducted into the LPGA Teaching and Coaching Professionals Hall of Fame. In addition, she earned other awards, including the Nike Outstanding Achievement in Teaching Award (2014), Ellen Griffin Rolex Award (2015), and achieved Emeritus Status in Golf Magazine’s Top 100 Teachers in America (2019).

Golf Digest also recognized Rader as one of the Top 50 Teachers in America and was ranked as No. 1 in South Carolina in Golf Digest’s “Best in the State.”

She earned the prestigious Nancy Lopez Golf Achievement Award in 2020, which recognizes the LPGA Professional who emulates qualities valued by Lopez: Leadership, Passion, Giving, and Approachability.

In addition, she was featured on the Golf Channel numerous times and was a past National President of the LPGA Teaching & Club Professionals Membership.

There will be an additional celebration of Dana’s life on Hilton Head Island in the weeks ahead.  Information regarding this ceremony will be shared at a later date.

Contributions in Dana’s memory may be made to the Dana Rader Leadership Fund through the LPGA Foundation, the Beaufort Memorial Hospital Foundation or the CJD Foundation.

Condolences may be sent to the family by visiting www.sossomanfh.com.