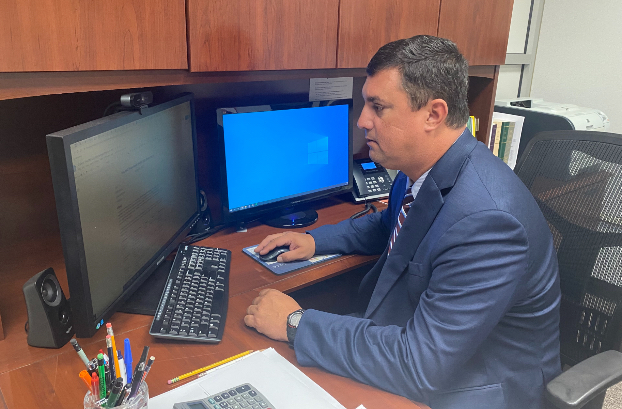 Superintendent Jarrod Dennis is excited about the upcoming school year.

With the start of the school year less than two weeks away, Stanly County Schools is still looking to fill a number of vacant teacher positions.

As of Wednesday, the district had 19 full-time teacher vacancies spread across the district, the majority of which are at the elementary level, Superintendent Jarrod Dennis said, noting the district was a little better staffed last year at this time.

“It’s just kind of all over the place,” he said. “We’ve got schools that are fully staffed, we’ve got some that need like one teacher, but we have some that need three.”

Substitute teachers, including long-term ones, will likely be in those spots to start the year until the spots are filled, Dennis said. He did mention that in some cases, most likely in high schools, a smaller class without a teacher could be combined with another class of the same subject.

The school system had 128 substitute teachers last year employed through ESS, a national organization that places qualified staff in daily, long-term and permanent K-12 school district positions. The goal is to increase that number to at least 180 for the upcoming year, Rachel Turner, local ESS account manager and recruiter, told the school board during a recent work session.

The manpower shortage involves more than just teachers. There are also roughly 15 percent of buses across the district that do not have permanent drivers assigned to them. This includes 10 bus driver positions and two bus monitors.

“Transportation this year is going to be a challenge,” SCS Director of Maintenance Todd Bowers told the school board a few weeks ago.

Dennis called the shortage “a big concern” because it means drivers will likely have to operate double runs, in which they pick up and drop off two groups of students at each school. Teachers assistants, who are hired through the school system and required to obtain their commercial driver’s license, could also be asked to drive, he said.

“Unlike a large school district, which can run double routes within a city, where you only need to make a couple stops to fill a bus, some of our double routes go all the way out to the county and they are long routes,” Dennis said.

The lack of teachers is not unique for Stanly County; it’s a problem school districts across the country are grappling with. The teacher shortage is being driven by factors including burnout, low pay and ever-increasing demands.

Some districts are having to come up with creative ways to get teachers into classrooms. The Florida Department of Education announced last month it would allow military veterans to teach in classrooms even if they have not obtained a bachelor’s degree.

“All in all, it’s not going to change until they start paying teachers more,” Dennis said.

In speaking with administrative staff and teachers, Dennis said they are excited to begin the year and get to know their students.

“I know a lot of people are glad to be back face-to-face and they’re glad to be back to in-person learning,” he said. “It seems like it’s getting more normal, but you never know what’s going to happen down the road.”

When it comes to dealing with the impacts of learning loss that occurred when so many students were away from school over the past two years, Dennis mentioned while the district is not where it was before the COVID-19 pandemic, “we’re moving in the right direction and we’re getting positive gains.”