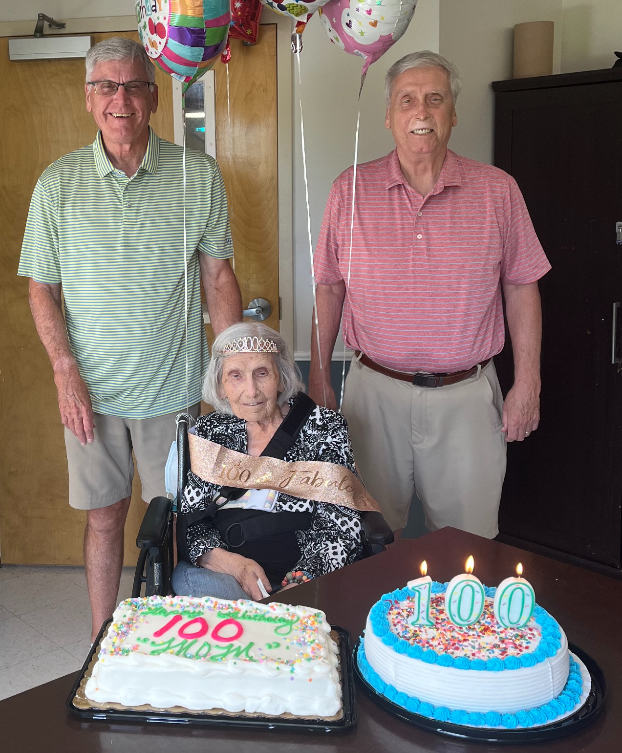 Monty and Kent Montgomery with their mother Hazelene, who turned 100 on Tuesday. Photo courtesy of Monty Montgomery.

The matriarch of one of the most well-known sports families in Stanly County recently celebrated an historic milestone.

“It makes me, and I think Kent would agree, feel so thankful that we have been able to enjoy our mother for, in my case, almost 76 years and in his case 79 years,” said Monty, who played baseball for legendary coach Joe Ferebee at Pfeiffer University and later was drafted by the Kansas City Royals. “That is just a tremendous thankfulness.”

After losing their father when he was 70, the two brothers (Don died in 1990) said they were hopeful Hazelene would live to be the same age as their maternal grandmother, who died at 95. Once she hit that milestone, they believed the century mark was a realistic goal.

The brothers said their mother is still very active at the living facility and even shares rooms with another woman who turned 100 a few months ago. Staff at Bethany Woods, who playfully refer to Hazelene as “Mama,” had a celebration for her Wednesday, they said.

The two brothers, both members of the Stanly County Sports Hall of Fame, try and visit their mother at least once a month despite not living in Stanly.

Even though Hazelene’s mother and aunt both lived into their mid-to-late 90s, both Monty and Kent do not take the milestone for granted.

“For us at our age, to still have a mom that knows us and loves us and we can talk with her and hug her neck…it is a blessing,” Kent said.

“To see her smiling today and talking and laughing, God couldn’t give us any better gifts,” he added.