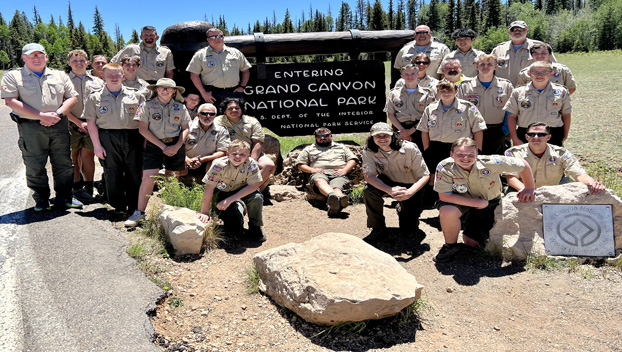 “The Grand Canyon was amazing, but hiking The Narrows in Zion National Park was incredible and one of my favorite experiences,” said Noah Watson, Eagle Scout and the oldest member of Troop 202.

On their first full day, Scouts hiked along the Northern Rim of the Grand Canyon. Later in the afternoon they drove to Utah and made camp at Bryce Canyon National Park that night. The next day the Scouts hiked the Hoodoos, which are tall, spindly rock structures.

The next campsite for Troop 202 was Zion National Park. Here they hiked The Narrows, the narrowest section of Zion Canyon. This gorge has walls a thousand feet tall and the river sometimes is just 20 to 30 feet wide. Also while in Zion, Scouts hiked up more than 1,000 feet of elevation to a couple of the most popular peaks in the park – Scout Lookout and Angel’s Landing.

Troop 202 concluded its canyon adventure by visiting the Hoover Dam and posing in front of the iconic Welcome to Fabulous Las Vegas sign.