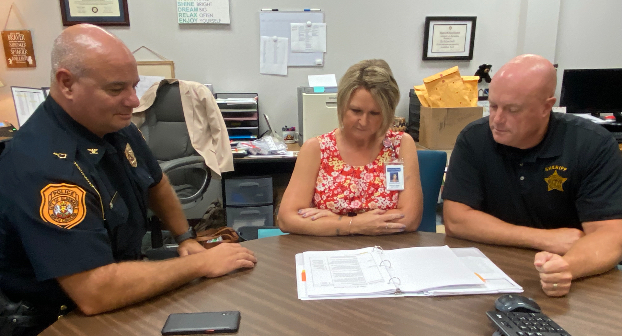 As students and teachers head back to the classroom Monday, school safety in several forms is directly on the radar for Stanly County Schools.

The district will continue to use the Say Something app, which was introduced in November, where middle and high school students can share tips anonymously.

“We had significant amount of tips and then when those tips came in we investigated those and law enforcement was involved in a few of them,” said Jennifer Flowe, district director of safety and security.

The district is also working with law enforcement agencies across the county to make sure each of the roughly two dozen schools are as safe as possible. This includes adding metal detectors to the schools, hiring more school resource officers and renewing active shooting training, among other initiatives.

“We want our students and staff to feel safe so they can come to school to learn and to teach,” Flowe said.

One of Flowe’s biggest priorities is placing school resource officers (SROs) at each of the district’s 10 elementary schools. Middle and high schools already have full-time SROs.

Currently only Locust Elementary and Norwood Elementary have SROs in place, though Central and East Albemarle share an officer, who will visit both schools daily. Albemarle Police Chief Jason Bollhorst has had conversations with City Manager Michael Ferris and said he’s hopeful the two elementary schools will have their own SROs in the near future.

“It’s vital for me to have officers in the schools,” Bollhorst said. “That’s the biggest threat deterrent. If everyone knows that we have law enforcement in a school, then that’s now a hardened target.”

The towns of Stanfield and Oakboro have committed to funding the position at their schools, they are just in the process of hiring officers, Flowe said. Other smaller municipalities simply do not have the money. The Richfield Town Council tabled a proposal this week to fund an SRO at the town’s elementary school.

To help offset the financial need for officers, Flowe is applying for a state SRO grant, which, if awarded, would give municipalities committed to funding the position more than $30,000 to achieve that goal. These include Locust, Stanfield, Oakboro and Norwood.

The Stanly County Board of Education during an Aug. 5 work session approved a resolution calling upon the Board of Commissioners to agree to fully fund three additional resource officers for Aquadale Elementary, Endy Elementary and Millingport Elementary for the upcoming school year.

County Manager Andy Lucas said the commissioners are aware of the resolution but no action has been taken. He is not sure if the subject will come up during the September meeting.

Although salaries can fluctuate, the average annual pay for a school resource officer in North Carolina is $32,065 a year, according to ZipRecruiter, an online employment marketplace.

Law enforcement agencies across the county regularly interact with students and staff at the schools in their jurisdiction, especially those without SROs, walking the hallways and familiarizing themselves with the locations in preparation for potential emergencies.

SROs stationed at each of the middle and high schools also routinely visit elementary schools in their area. The school resource officer at North Stanly High, for example, is assigned to Richfield and Badin, which do not have SROs.

“Go walk the schools and learn about the schools,” Stanly County Sheriff Jeff Crisco said he tells his officers. That way, if an active shooter situation or some other emergency occurs, “you’re familiar with the layout of the school.”

“We encourage schools to invite other law enforcement officers that might be in that area if they’re not on a call to come participate in those drills because that allows them to know the layout of the building and know where kids are,” Flowe said. “And that’s just another set of eyes that can offer suggestions of maybe something they see, because we can look at things through different lenses.”

The mindfulness students can learn from emergency drills can also be applied to their everyday lives.

“If we prepare them at school for emergencies that occur in school, they will also apply this knowledge out and about wherever they are in a normal day, whether they’re at a mall or a movie theater or grocery store,” Flowe said.

The school system and law enforcement agencies have also been preparing for how to respond should the worst-case scenarios occur.

For the first time since before the COVID-19 pandemic, the Sheriff’s Office has resumed active shooter exercises within schools. Officers equipped with safety gear try to neutralize the enemy with non-lethal weaponry including paint ball guns.

“It is as close to being shot and not killed as you can get,” Crisco said.

The trainings involve just the officers, but Crisco plans to expand to include other law enforcement agencies, firefighters and EMS. He wants to hold the trainings multiple times each year.

“The more you train, the more it becomes muscle memory,” he said. “You don’t have to think about what you’re going to do, you just do it. And that’s what we want.”

The Sheriff’s Office has also distributed handheld radios to each school for the first time, connecting them with the 911 communications center. Staff at the school have been trained on how and when to utilize the radios.

“It’s everything from weather announcements to worse-case scenario, an active shooter,” Crisco said.

SCS offered “Stop the Bleed” training to bus drivers this week so they can respond to injuries should emergency situations occur. They were also trained in Hands Only CPR. A similar training was offered last week to staff.

The drivers were taught about applying direct pressure, wound packing and tourniquets to assist someone suffering from an injury where there is heavy bleeding.

“It helps teach them how to provide emergency assistance until other help arrives,” Flowe said.

The training session was a collaborative effort between the district, Stanly EMS, law enforcement and Atrium Health Cabarrus’ trauma unit.

Installing metal detectors in each school

Another way to beef up security is by screening who is allowed to enter the schools. All of the middle and high schools have portable metal detectors, which were installed last school year. These are only used for large-scale events such as football and basketball games, graduations and award ceremonies.

“Students do not walk though them on a day-to-day basis,” Flowe said.

Flowe has been talking with other municipalities to help fill in the gaps. The district is looking into using grant funding to purchase the remaining metal detectors, which Flowe hopes to have installed inside every school this year.

“We’ve had positive feedback from spectators and from parents who say they are appreciative of the safety efforts in place,” she said.