After eight months of being without a pastor, the pastoral search for Saints Delight Church has come to an end.

With the assistance of Dr. Anita Owens-Scott, founder and CEO of Harvest Ready Church Consulting, the process began with discussing the needs of the church and developing a profile of the pastor that the members believed would best meet their needs; a pastoral search committee was formed, Sister Charliebelle Christian was named as chairperson of the committee and soon thereafter Saints Delight began advertising for a pastor.

After one and half months of advertising, the church received 15 resumes of candidates desiring to serve as senior pastor.

The pastoral search committee sifted through the resumes, discussing each to make sure that right candidate was selected. The resumes were narrowed down to two candidates that met the criteria Saints Delight had decided upon. Each candidate was interviewed and given the opportunity to preach two consecutive Sunday morning services and teach two consecutive Wednesday night Bible studies.

At the end of the pastoral candidate’s preaching and teaching, members of Saints Delight Church were allowed to participate in a secret ballot vote.

The vote was taken and Pastor E. Charles Barrino was elected as the new pastor of Saints Delight Church. 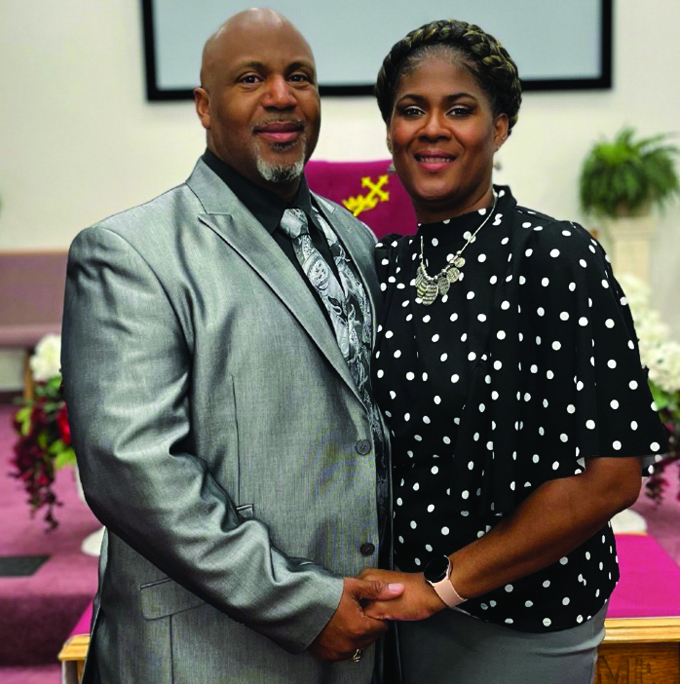 E. Charles Barrino, left, was recently selected as the new pastor of Saints Delight Church in Albemarle. He is joined by his wife, Tina C. Barrino, who is also a minister. (Contributed)

Barrino hails from Marshville, however, he and his family currently reside in Pageland, South Carolina.

Barrino is married to Tina C. Barrino, who is also a minister. They have six children.

Pastor Barrino is no novice to ministry. He has been preaching for over 19 years and has served as an assistant pastor.

A meet and greet was conducted Aug. 6. The fellowship hall filled quickly with church members, pastors, ministers and elected officials of the City of Albemarle.