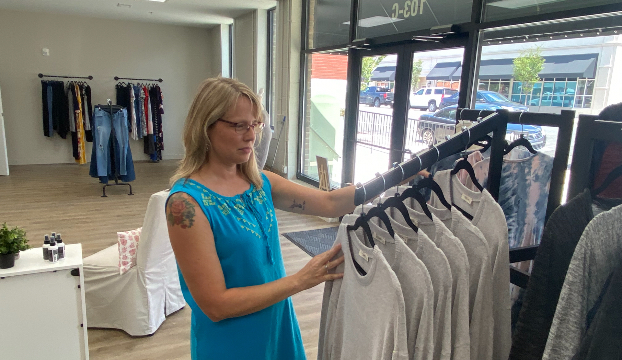 Vicky Doby always wanted to open her own business, but the timing never seemed quite right.

About a decade ago when the Albemarle resident was a stay-at-home mom, she had the idea of starting a business selling clothing for expecting mothers.

But she did not have a business background and her focus was on taking care of her two children.

“It was really just an idea with nothing attached to it,” she said.

With her children now grown, Doby recently left her job as an office manager, took a chance and decided to follow her passion.

It seems to have paid off.

“That idea that’s been within me all this time just kind of resurfaced and I was at a point in my life where I could take this huge step of faith and do this,” Doby said. “I did not want to look back 20 years from now and regret not trying it.”

She said she’s surprised no similar store has opened in the county.

“I feel like it’s a golden opportunity,” she said.

The store will feature new and consigned clothing for expecting mothers and women who are nursing, along with some postpartum care products. Doby wants to eventually have maternity photoshoot dresses and formal wear that women can rent or buy.

She wants it to be a place where women can find stylish yet affordable outfits. The clothing will also come in a range of sizes, which was important for Doby.

“I want to offer a very wide range of sizes to accompany all kinds of women,” she said. 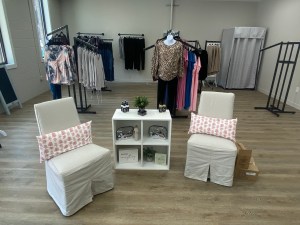 The boutique will feature clothing for expecting and nursing mothers.

She said she’s heard from plenty of excited soon-to-be patrons, many of whom have donated clothes and told Doby what a great idea it is to open this type of business.

As she prepares to open, Doby acknowledges she’s scared and still has a lot to learn about running her own business, but she’s ready to open her store, which has been a long time coming.

“I am the most excited about work as I have ever been in my life,” she said. “When I wake up, I can’t wait to get in here and get things done.”

Doby is also excited to be located beside two clothing boutiques, featuring women and children’s clothes, which have recently opened and are doing well. She hopes people will come to the apartment complex and find reasons to shop in all three.

“We’ve talked and we feel like God has just really orchestrated this,” Doby said.